The realpolitik of rights and democracy

What happens when human rights and democracy do not only advance Western foreign policy, but also contribute to producing, not reducing, poverty?

In 2010, former president of the World Bank Robert Zoellick announced that the Third World was passé: “If 1989 saw the end of the ‘Second World’ with Communism’s demise, then 2009 saw the end of what was known as the ‘Third World’.” He was arguing that the way we address poverty, the roles of donor and supplicant, and the way the world deals with failed states must change. At the same time, hopeful discussions about Africa’s burgeoning middle class were on the rise. In fact, that same year, the African Development Bankestimated that the middle class had increased to 34% of the African population.

But this talk about “Africa Rising” is vastly overhyped. A Standard Bank surveyof 11 sub-Saharan African countries, which together account for about half of Africa’s gross domestic product, found that 86% of their households remain in the low-income band.

Indeed, Ricardo Gomez noted that in 1992, one-fifth of the world’s wealthiest population received 82.7% of the total world income. Oxfam revealed that by 2014 the richest 85 people across the globe shared a combined wealth of £1 trillion, as much as the poorest 3.5 billion of the world's population. In addition, the wealth of the richest 1% amounts to $110tn (£60.88tn), or 65 times as much as the poorest half of the world. On top of that, the UNDP consistently reports on the rise of poverty within countries in the global South.

Why, in this so-called era of rights and democracy and the corresponding rights-based development, is inequality on such a drastic rise?

Why, in this so-called era of rights and democracy and the corresponding rights-based development, is inequality on such a drastic rise?

Stephen Hopgood notes that Western liberal democracies sustain international space for collaboration and negotiation because it is in their best interests; spreading democracy and human rights often helps to realise their foreign policy objectives. Despite the motives, he argues, the very existence of this international space benefits human rights either directly or indirectly.

But the benefits Hopgood alludes to often only serve a tiny minority of the emerging middle class, who pick and choose what rights to enjoy or fight for, sometimes to the detriment of the majority. After all, as Hopgood himself points out, the middle class is a democratic state’s key constituency, and logically their demands will carry the most weight.

In fact, Western powers have long focused on democratic and rights-based approaches as one of the best frameworks to tackle poverty, which at face value might seem like a good thing. But poverty reduction efforts remain drastically uneven across the globe. Much of this is due to exploitation by multinational corporations (MNCs) and pseudo-democratic governments in the global South, many of which accumulate power through the application of the rights-democracy framework.

As Daniele Archiburgi points out, following the fall of the Berlin Wall, the United States and its allies exported “instant democracy”. Capitalism, after all, promised “quick” prosperity. However, the realpolitik behind the sudden push was to entrench capitalism and access formerly unreachable markets.

A type of market democracy and minimal attainment of rights was consequently implanted in the global South, which created a collaborative-antagonistic partnership with global South leaders. This relationship was intended to portray a new partnership of “equals” between the global North and South, founded on the ethos of democracy and geared towards improving the fortunes and wellbeing of the latter. At face value, this arrangement reflects a greater respect for the sovereignty of global South states and the rights of their citizenry, yet the hidden costs for the majority poor are more onerous.

The antagonistic arm of the relationship allows each party the right to criticise the other’s foreign policy objectives and state practices, but in a measured tone. A good example is the US wanting to have Al-Bashir, the President of Sudan, arrested and prosecuted for war crimes, while collaborating with him on gathering intelligence against jihadists in Africa at the same time. 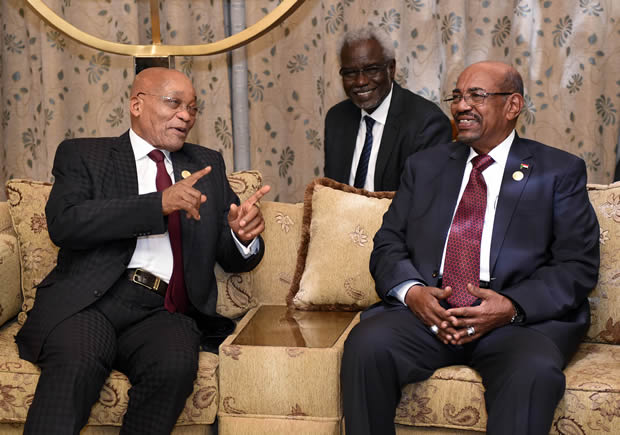 African leaders Jacob Zuma and Omar al-Bashir converse in Khartoum. Western nations' relationships with Africa's political leadership is often beneficial for both parties, but may neglect the concerns of the African people.

On the collaborative side, the global South is subjected to a “free trade” deal with the North, under the control of the World Trade Organisation (WTO) and other international financial institutions. This allows MNCs to bulldoze their way through treaties and other negotiations, enjoy generous tax breaks and unfettered access to natural resources or markets in the global South—while paying grotesquely low levels of royalties to its citizens and destroying their environment.

This arrangement also benefits leaders in the global South. First, it helps entrench them in power, through the pseudo-democratic arrangement put in place by the West. As a result, many citizens of the global South now have an ensemble of rights and freedoms enshrined in their national constitutions, yet rights violations are rife. In many countries of the global South, for example—and especially in Africa—governments resort to vote-rigging, vote buying and altering the constitution to extend their stay in power. Numerous laws to ensure various rights serve only as a cover for these governments to display their “commitment”, without having any practical benefit for the citizens.

Second, it creates room for legalised predation—an arrangement whereby laws are put in place to theoretically fight corruption and financial misappropriation. However, in practice, they only represent a tepid attempt to deal with the problem. Despite measures such as public procurement laws, whistle-blowers acts, and commissions/committees of inquiry, corruption remains on the rise according to Transparency International indices.

Consequently, what results is poverty production rather than its reduction. The principal beneficiaries of this partnership are the MNCs, while the global South’s political elite and the emerging middle class are left to scramble for the leftovers. And the poor are left out altogether.

Of course, the middle class is expected to expose injustices in the system through application of their knowledge and skills, and the use of rights discourse and practices. Yet, along these lines, Hopgood notes that the rising middle class in the global South are likely to prefer civil and political rights that will protect their person and property, over socio-economic rights that require redistribution of their wealth.

The ultimate solution lies in the cultivation of a new brand of global South political leadership. This leadership must be forward-looking, assertive against the West and bold enough to jettison the current imported democratic arrangements in favour of an inclusive form of governance, which must be rooted in the cultural, historical and developmental circumstances of these countries. This notion of democracy/human rights should genuinely reflect local aspirations and input and be grounded in the lived experiences and interests of not only the middle class, but also farmers, artisans and workers in the informal sector who form the majority poor. The practical application of this home-grown democracy will ultimately contribute towards the attainment of sustainable, holistic development for the global South.

Internationalisation: lessons from the women’s movement

Do African rights groups have the “how” to internationalise?