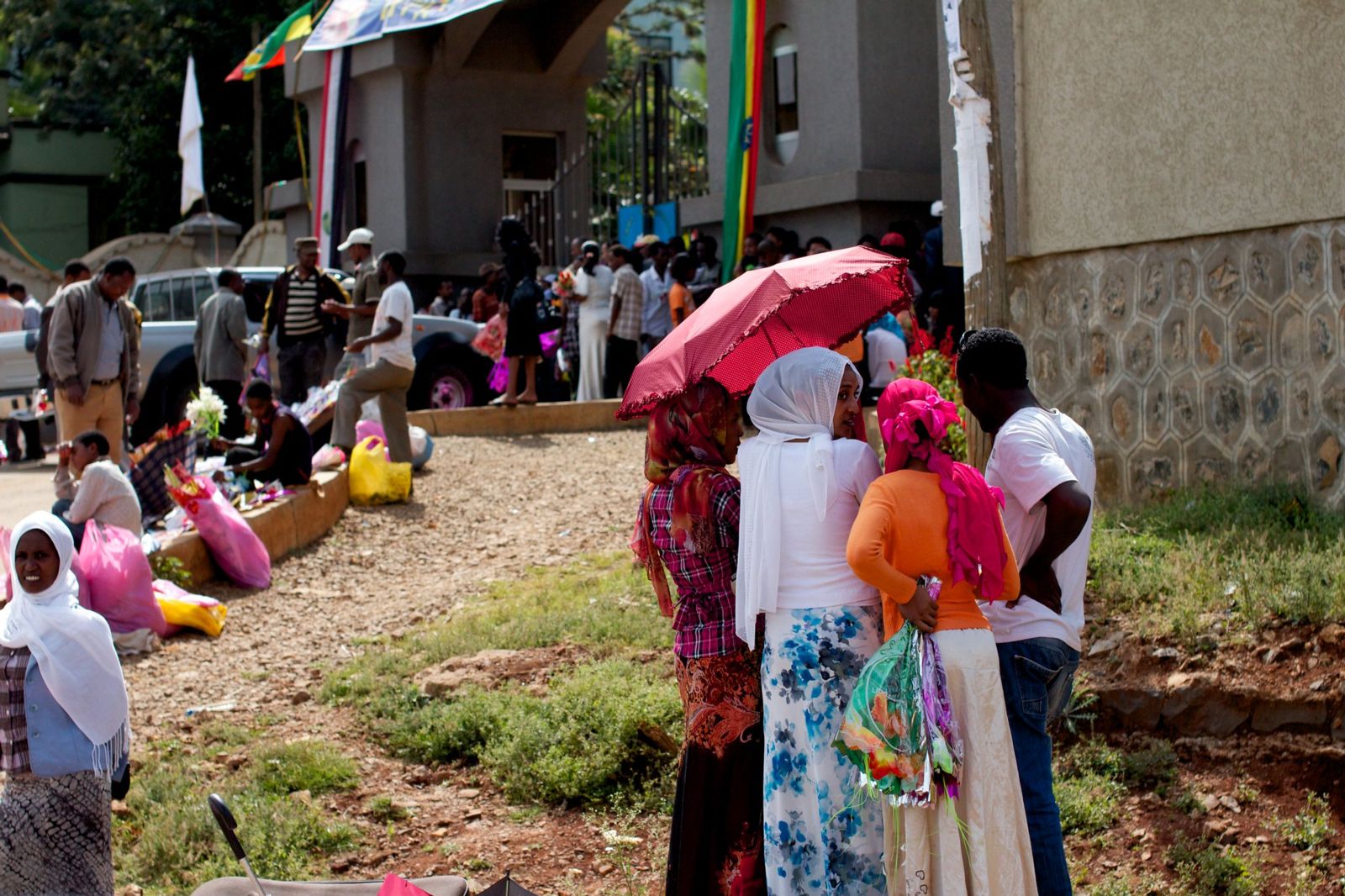 Photo was taken from a graduation ceremony in 2011 at the Jimma University graduation, a public research university located in Jimma, Oromia, Ethiopia. Stijin Debrouwere/(CC BY 2.0)

Sexual violence on university campuses has not received the same policy and scholarly attention as other public and private spaces where gender-based violence occurs. The recent documentary Sex for Grades highlights how insidious these violations are and their costs for victims attending Nigerian and Ghanaian universities. We, as educators, researchers, and lawyers, at the University of Minnesota and an Ethiopian legal rights-based NGO, respectively, formed a partnership to understand sexual violence within higher education institutions, and to consider more effective ways to prevent and intervene with faculty, staff, and students in such violence.

Our approach was to carry out research, advocacy, and educational work outside the institution to have a greater impact within it. The stories we heard from university women in our research study highlighted that there are organizational mechanisms that protect faculty members, a lack of support for female students who report sexual harassment and violence, and a culture of silence that accepts sexual harassment as normal. Thus, creating a partnership with a legal advocacy organization could help address the need to protect women’s rights and advocate for institutional change on campuses.

Helina, a law student from rural Ethiopia, experienced sexual violence when she was a first-year student. Another university student, who had been stalking her for a while, tried to talk to her and held her hand without her consent, near the campus main gate. Helina was scared of what this stalker might do. Despite her concerns, she told him that he could not speak to her without her consent. He then threatened to stab her. Though she was frightened by his actions, she did not notify anyone at the university because she did not think they would help her. She also felt that, if she reported him to the university authorities, she would actually be more vulnerable to the stalker’s revenge. Even though the law provides protection from such harassment and violence, female students often choose not to report it, fearing consequences. These forms of violence affect female students’ ability to study and even may result in their decision to drop out of university.

While there is growing awareness and advocacy about sexual violence in Ethiopia, there is still a culture of silence around it. Another university student, Fatuma, explained how she tried to resist but learned to accept the culture of silence. At first, she called out those who insulted or catcalled her while walking around campus. Her friends told her to “take it easy, as it is normal”. She became frustrated and asked herself if it was her fault; eventually, she started to accept it as “normal.” Unfortunately, universities take little action to effectively address the causes of sexual violence on their campuses since there is no independent body to examine sexual violence claims.

While there is growing awareness and advocacy about sexual violence in Ethiopia, there is still a culture of silence around it.

To address sexual harassment that female university students like Helina and Fatuma experience, we collaboratively designed a research study that could inform policy and practice with a partner organization: the Dire Dawa branch of the Ethiopian Women Lawyers Association (EWLA), a non-profit women’s advocacy group established in 1996. The collaborative design process allowed us to identify solutions that victims themselves feel could advance female university students’ rights in Ethiopia.

First, it is important to document women’s experiences and their perspectives to reveal the gaps in current laws and protections. Many students who participated in our research indicated that holding hands without the women’s consent, touching private parts, insulting, and catcalling are among the most common forms of sexual harassment at the university. The law does not acknowledge these various forms of harassment as sexual violence, which is narrowly defined as rape or sexual assault expressed through a physical form (see Article 620 - 628 of Criminal Code of Ethiopia).

These other forms of sexual violence, including intimidation and harassment, repeatedly occur and often go unreported, or are not the focus of prevention, as Helina’s story illustrates. In turn, this lack of sanctions and reporting contribute to the culture of silence. Together with EWLA, our study contributes to their current advocacy work to support a national legal framework that recognizes multiple forms of sexual harassment.

Second, we are using the study’s findings to inform the organization’s existing advocacy and programs. For years, EWLA has implemented a public education program including awareness about different forms of sexual harassment and the availability of protection measures. Despite these resources, many university students, especially those from other regions, are not aware of those protections. For instance, Zoe, a fourth-year student, explained that most female students do not bring their cases to the court or to the university’s administration because they do not know where to go, and they feel insecure about staying on campus if they bring a case against their perpetrators. Zoe emphasized the importance of awareness programs for female students to boost their confidence in reporting and to better understand the protections they can seek.

The collaborative design process allowed us to identify solutions that victims themselves feel could advance female university students’ rights in Ethiopia.

Female university students need this information before they attend higher education institutions so they have greater awareness of the forms of sexual harassment and how they can respond. But these education programs should not only target female students. Considerable research shows that the bystander-intervention training, which mobilizes men and boys as allies working to solve sexual violence, is more effective to address the underlying causes of these forms of harassment and bring about desired change in behavior.

Finally, based on our research, EWLA is working to develop separate and joint trainings on women’s rights, sexual violence and harassment, and empowerment-based training. They are also keen to collaborate with the university gender office to develop a campus sexual misconduct policy and to open a center for female students where they can get free legal advice and report any forms of sexual violence. Providing financial and material support for women and girls is another approach that EWLA is considering, because young women from economically disadvantaged homes are more at risk of sexual harassment.

While universities in Ethiopia have taken several measures, such as having separate sections for female and male students in the central library, these actions are often perfunctory. They aim to decrease incidents of harassment, but they do not change the underlying system that allows violence to persist, or the culture of silence around it. The autonomy that universities have, and the power differences that exist between professors and students, can hinder change; therefore, pressure from outside organizations and groups is needed to change existing systems within the university. For instance, the women in our study recommended having an independent group outside of the university that examines sexual violence cases to be provided with protections.

Creating collaboration with locally-based advocacy organizations like EWLA is helping to address these institutional gaps by proposing a student code of conduct that recognizes different forms of sexual harassment; conducting sexual harassment training and advocacy workshops for students and faculty; and providing legal counseling and representation for victims of sexual violence. With these strategies, we are workng toward the goal of bringing sexual harassment awareness on campus and beyond, as well as finding ways to steadily reduce it.

Hanna Wedajo is a Ph.D. candidate in Comparative and International Development Education (CIDE) program at the University of Minnesota. Her research interest area includes examining the opportunity gap for students from economically disadvantaged families and scrutinizing barriers for the right to education of women and girls, particularly in Ethiopia.

Joan DeJaeghere is a professor of Comparative and International Development Education (CIDE) at the University of Minnesota. Her scholarly and professional interests are concerned with how inequities are produced and transformed in and through education. Her research examines gender, caste, class, and ethnic inequalities in education, and how education can foster inclusive citizenship, livelihoods, and wellbeing.

Mahlet Yednkachew is the head of the Dire Dawa branch office of the Ethiopian Women Lawyers Association (EWLA). She has an educational background in law and sociology and has expertise in advocacy, awareness-raising, and managing the free legal service program.