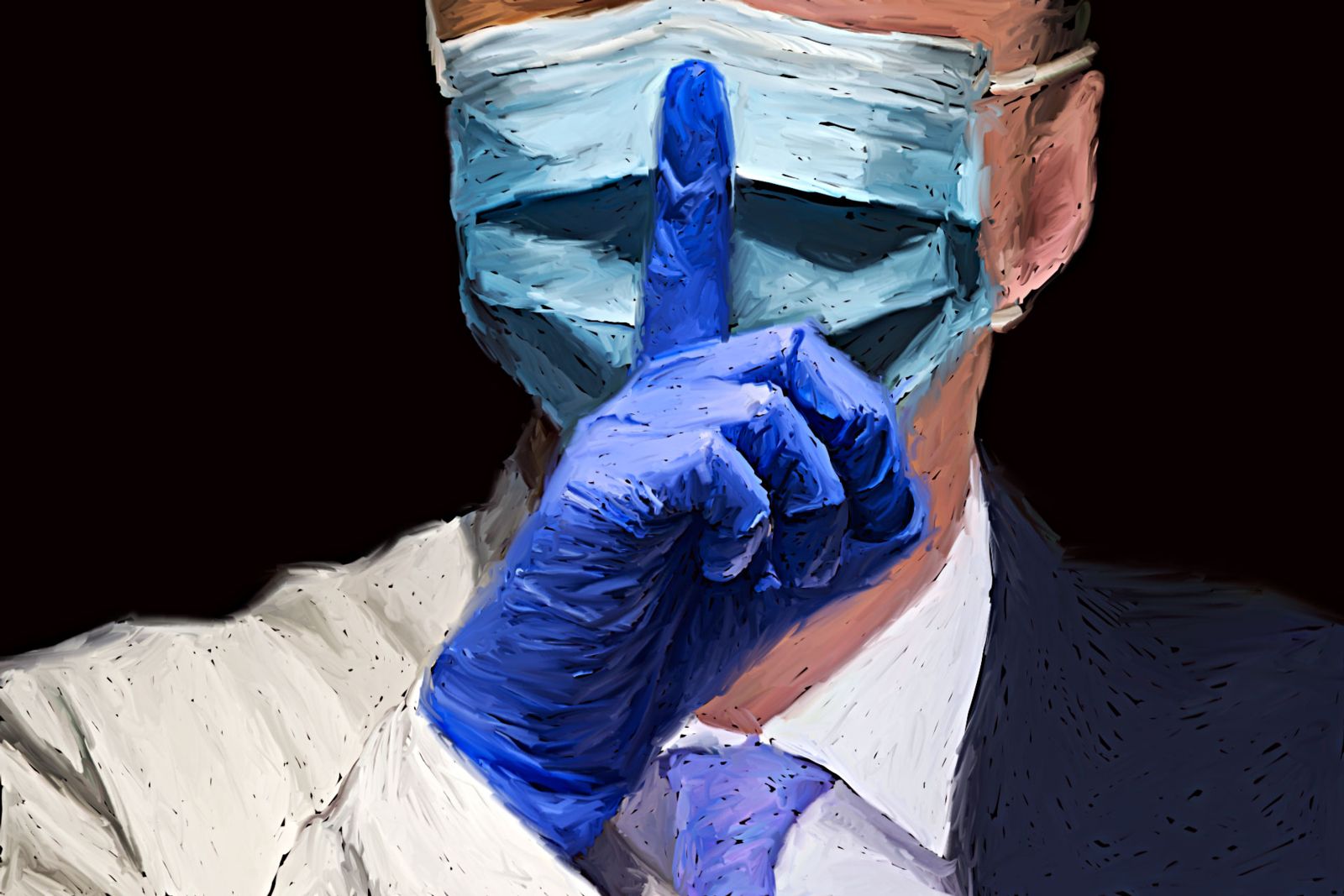 It seems that the coronavirus is a health scourge that, for the first time in a long time, has disproportionately devastated the world's richest countries. If we compare the numbers of cases and deaths accumulated by Covid-19 since the beginning of the pandemic, among the countries with the worst performance we find a good part of the developed world. As of late March, the United States has accumulated more than 1,600 deaths per million inhabitants and the United Kingdom more than 1,850 (see figure 1). A quick glance shows that the higher the gross domestic product per capita, the higher the confirmed deaths from Covid-19 per million inhabitants (see figure 2). 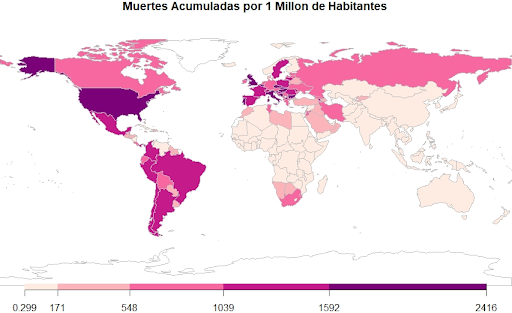 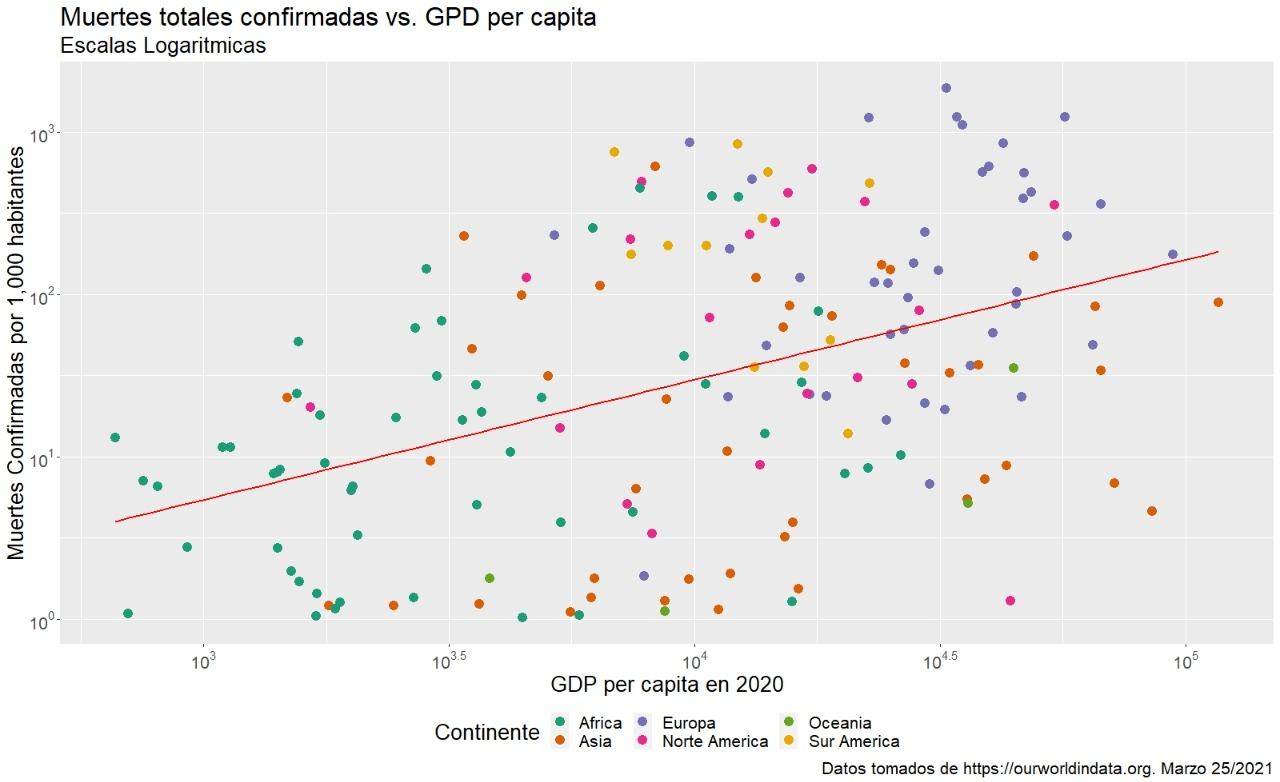 Based on this data, one might think that it is hardly logical that the global supply of vaccines is being monopolized by the countries of the Global North. The most recent figures show that countries such as Canada, the US, Israel and many European countries acquired many more doses than it would be required to inoculate their entire population. Rich countries will likely reach their vaccination targets before the end of this year, while the rest of the world will have to wait until 2022 or even 2023.

However, this apparent justification for the concentration of vaccines in the most affected countries hides a history of extortion and profound global inequity in the development, production, and application of vaccines, which threatens the right to health of the world's poorest and most vulnerable. 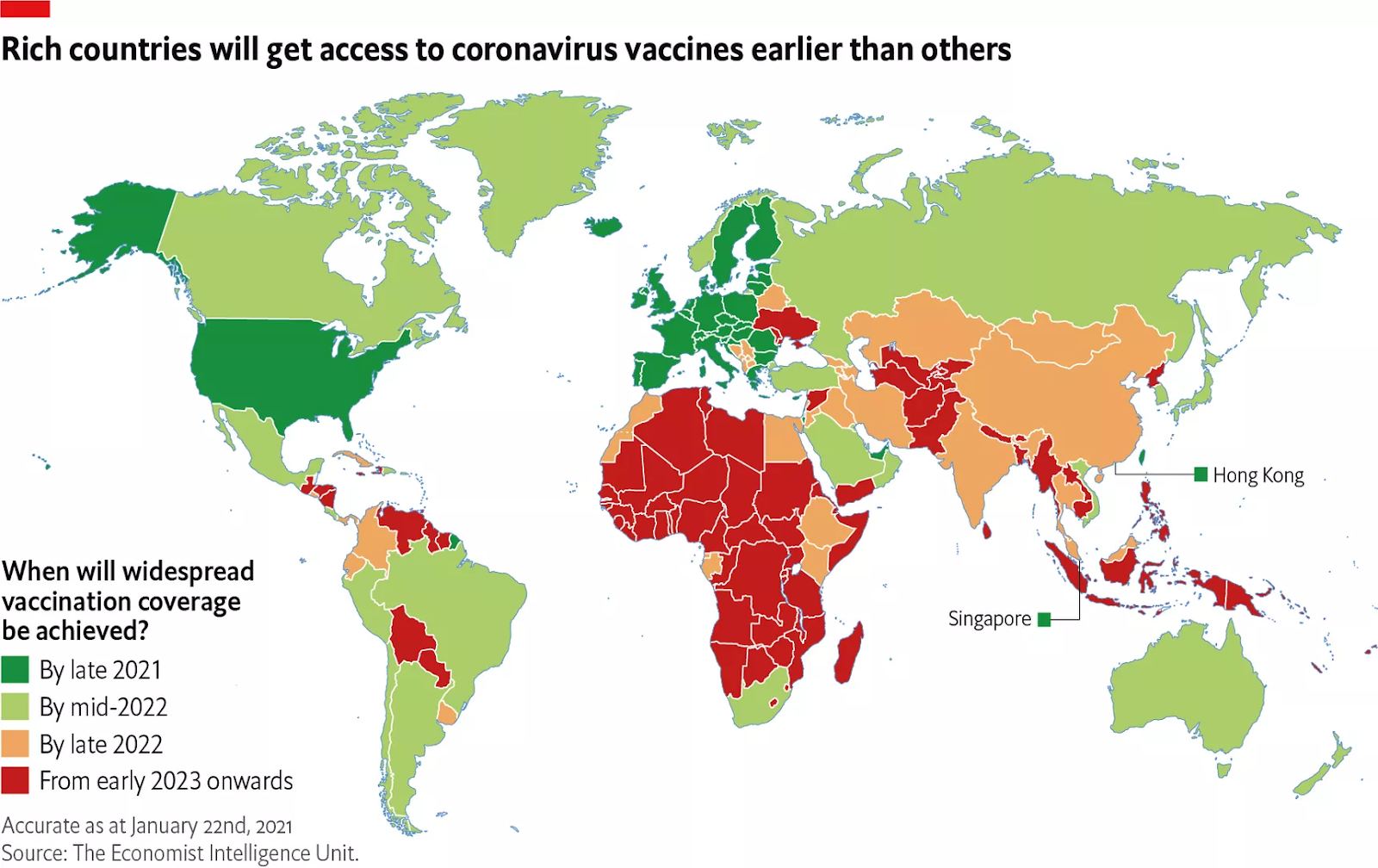 Just look at what happened in Latin America. The region has been almost as affected by Covid-19 as Europe and North America, with more than 1,200 confirmed deaths per million inhabitants. If the criteria for assigning vaccines followed some logic of necessity, this region would have have been one of the most prioritized, not only because of the number of cases and deaths, but also because of its high rates of poverty, informality, and inequality that aggravate the impacts of the protection measures implemented by their governments. However, Latin America is lagging far behind in the acquisition and application of vaccines in comparison to the rest of the developing world.

There are two crucial reasons related to transnational pharmaceutical companies and developed governments that explain vaccination in the region. The first is that the Western pharmaceutical industry behaved just as it had before the pandemic. It continued to bet on secrecy, speculation and price discrimination, the non-recognition of public investment in science and technology. and the marketing of the newest technologies, regardless of their usefulness and scalability in diverse contexts. The second is that the United States, Canada, and other countries in the Global North continued to bet on the weakening of global and regional cooperation mechanisms. For Latin America, this meant that integration mechanisms between countries in the region such as the Pan American Health Organization (PAHO) or the Union of South American Nations, which could have become united fronts for the negotiation of vaccines in better conditions, were practically absent from the pandemic scene.

The pharmaceutical industry has remained the same

None of the practices of the pharmaceutical transnationals has proven to be different from those before the pandemic. It is true that the development of vaccines and clinical trials to test their safety and efficacy took place in record time, but this is largely due to the injection of public resources and the seemingly infinite availability of participants for clinical trials.

Despite the request of several governments from developing countries, the western pharmaceutical industry has lobbied relentlessly to prevent a temporary suspension of the intellectual property rights of vaccines (patents and industrial secrets) that would allow more countries to produce them and thus end the constraints facing global supply today. Worse still, following a trend that had already made its way into negotiations between pharmaceutical companies and governments for the acquisition of drugs for high-cost diseases such as cancer, vaccine producers insist on the confidentiality of all their supply agreements. This means that countries cannot publicize the contracts they signed to access vaccines despite the fact that these are clearly in the public interest, which also further prevents governments from negotiating on equal terms. This is especially important if we take into account that among the conditions imposed by the pharmaceutical companies in these contracts is being exempted from any responsibility for adverse effects that their vaccines may generate and the requirement that Latin American countries have sufficient funds reserved to address any lawsuit for such adverse effects.

Added to this scenario is the marketing of effectiveness and pharmaceutical "brands," which makes the task of inoculating most of the world's population as soon as possible seem more like a competition between mobile phone companies than a public investment process with clear consequences for health.

If we add the usual policy of transnational pharmaceutical companies to the usual policy of how developed countries operate, we begin to see why regions like Latin America are lagging behind in the battle against Covid. In addition to having significant limitations in accessing vaccines due to conditions imposed by pharmaceutical companies, Latin American countries did not have their most powerful weapon when negotiating vaccines: regional cooperation.

For years, developed countries, especially the US during the Trump administration, have acted to weaken the mechanisms of cooperation on health issues at regional and global levels. This is how the PAHO revolving fund, which for years served to aggregate demand and guarantee access to vaccines for all the countries of the region at the best prices, was absorbed by Covax and was practically irrelevant for the supply of vaccines in the region.

This apparent justification for the concentration of vaccines in the most affected countries hides a history of extortion and profound global inequity in the development, production, and application of vaccines, which threatens the right to health of the world's poorest and most vulnerable.

In conclusion, Latin America is in the worst of all worlds: each country negotiates production and purchase agreements like an island in the face of power concentrated for years by the transnational pharmaceutical industry. In this context, countries have committed almost everything for nothing. They exempted companies from liability, ensured the confidentiality of trading conditions and prices, begged for access to intellectual property, and in return received a mediocre spot on an overcrowded supply list. As expected, all the countries in the region have had to refer to the offer of Chinese and Russian companies to reach the end of the month.

The lack of pandemic solidarity from both pharmaceutical companies and developed countries has already translated into delays in the supply of vaccines in Latin America. This, in turn, complicates the logistics for their application. The fact that the doses arrive in small quantities hampers mass vaccination campaigns which are ideal in dispersed contexts and with high rates of poverty. The region is applying vaccines more slowly than any other with the same rate of Covid incidence, which most affects vulnerable populations and remote regions. Although the government of the U.S. and some European countries recently supported the patent exemption for COVID vaccines, there is a long way yet for those wills to become a real technology transfer and an increase in global production. This is how the actions of transnational companies that are listed on the stock market and of governments of developed countries end up, once again, violating the right to health of the poorest in one of the most unequal regions of the planet.

Tatiana Andia Rey is an associate professor of sociology and the director of the Graduate School of Social Sciences at the University of los Andes.