Shaming by human rights organizations can indeed change state practices, with the right combination of partners and conditions.

Using a new data set of more than 400 HRO activities aimed at governments, together with new data on the domestic presence of rights organizations and the targeting of governments by outside advocacy forces, we found that public criticism by HROs does indeed influence state human rights practices—but only under the right conditions.

The role of human rights organizations, put simply, is to place issues on the international community’s agenda, to assist domestic advocacy groups in their own struggle against repression, and to push other states and intergovernmental organizations to join in advocacy attempts. Through this process, repressive regimes are pressured or socialized into improving their human rights practices. 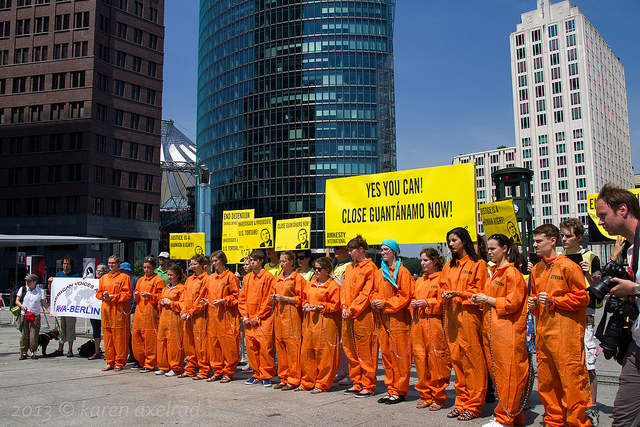 An Amnesty International protest against US torture programs in Germany. Can shaming by human rights organizations force states to correct abuses?

Much of the HRO literature focuses on how individual rights organizations try to persuade actors to adopt human rights norms through shaming activities. For example, when Human Rights Watch publicized political disappearances in Argentina during the early 1980s, the idea was that this type of criticism—deliberately public and aimed at embarrassing the state—can draw states into patterns of discourse where human rights norms are first adopted for instrumental reasons and later become “standard operating procedures”.

Yet a state changing its practices—or any improvement in human rights—due to HRO activities is far from a sure thing. Improvements in human rights practices depend critically on the simultaneous actions of many different advocacy actors. Through their work within a state, human rights organizations can work with domestic organizations and the grassroots to augment and heighten pressure on a repressive regime “from below”. At the same time, HROs are critical in increasing world awareness of human rights violations in a repressive state. Through the same behavior that HROs use to directly pressure a state, these organizations are able to call on the international community to help pressure a target-state “from above”. As Thomas Risse and Stephen Ropp conclude, we can only expect improvements in human rights with the right combination of pressures from above and from below.

Shaming by HROs, when combined with targeting by third-party actors, leads to greater respect for human rights.

To explore these ideas, we used new data on HRO activities towards governments during the time period 1992–2004, which represents the first widespread attempt to capture the activities of multiple HROs directed at governments at the cross-national scale. When combined with available measures on human rights performance, it yielded a sample of roughly 130 states, seventy of which can be classified as lesser developed countries, for a total of roughly 1,300 country-year observations.

Our results, available in this full report, confirmed that human rights shaming by itself does not lead to greater human rights performance. Yet, we found that it can indeed have a powerful impact on basic physical integrity rights when it is either combined with domestic HROs or—perhaps more importantly—with shaming by intergovernmental organizations, third-party states, or individuals outside of the targeted regime. When there is a combination of third-party pressure and domestic rights organization presence, the effect of HRO public criticism is even more powerful.

One of the major mechanisms through which human rights organizations operate is by drawing third-party actors into the advocacy network, and our findings stress the importance of multiple advocacy actors in shaming campaigns. When these actors pressure governments as well, HRO shaming has a substantial impact on human rights practices. As such, these findings highlight an important, though sometimes overlooked, role of advocacy by international organizations: efforts are not only important for pressuring the targeted state. Instead, work by HROs is also important for encouraging third-party actors to pressure a repressive regime themselves.

Our findings also underscore the importance of the reputation mechanism: with the right combination of pressures, states will change their behavior to preserve or improve their international reputation. In addition, our study shows that HROs can have an impact on human rights even without being able to enter a state. This is especially important due to the increased closing of civil society space, where states are restricting the operations of human rights organizations within their borders.

While a combination of efforts is certainly critical, our results suggest that, overall, the pressure “from above” is most important. Though HRO efforts to aid pressure “from below” also matter, if there are high levels of third-party attention on the state, the likelihood of improvements in human rights conditions is substantial, even without any domestic HRO presence. This bodes well for activists interested in changing regimes that have closed off access for rights organizations. Indeed, these findings indicate that even if borders are closed, the international human rights community can still create enough pressure for change.