For Africa to address challenges like climate justice, conflict transformation, and food security, the participation of youth activists will be critical. 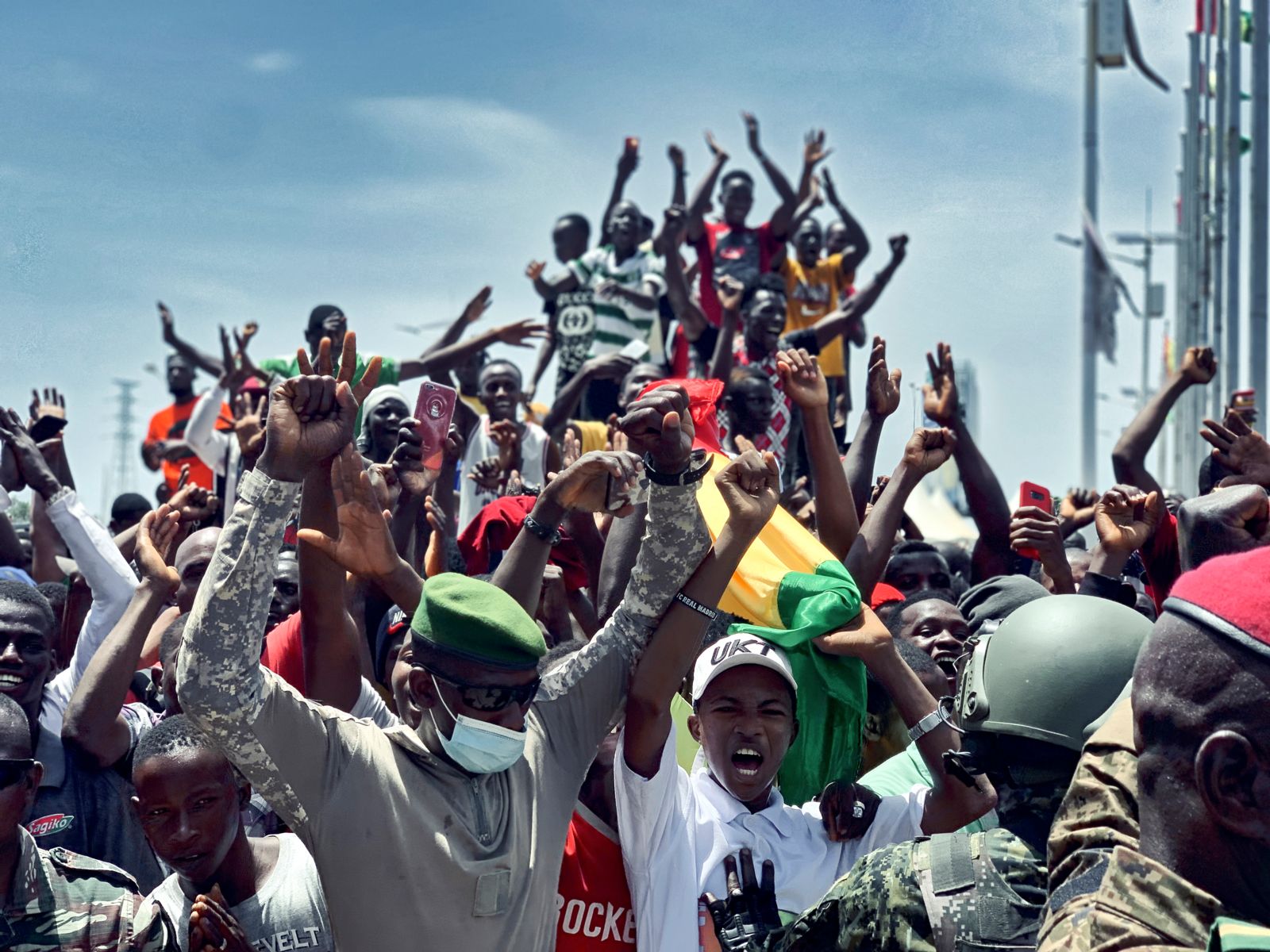 Guinean special forces celebrate with Guineans waving the national flag during celebrations at the Palace of the People in Conakry, Guinea, September 2021. Guinea Colonel Mamady Doumbouya spoke on a state television broadcast saying President Alpha Conde was in custody. EFE/EPA/STR

Youth activism is sweeping Africa. Through protests, the forming of associations and new spaces for expression, young activists and youth-led movements are on the front lines of change. But will governments listen?

During the 2010s, African youth movements were largely concerned with politics. Young activists were outspoken against government misdeeds. Notable examples of such movements include Y’en a Marre in Senegal, Balai Citoyen in Burkina Faso, or Filimbi in the Democratic Republic of the Congo (DRC).

Today, youth are involved in issues ranging from migration to transparency and accountability on land and natural resources, to protecting children from violence and gender-based abuse. Young activists in countries including Guinea, Senegal, Nigeria, and DRC have stood up to their governments for refusing to hand over political power, using state security services to violate fundamental freedoms, and looting the profits from mining and natural resource extraction.

This rise in youth activism reflects two deeper factors that are playing out across the continent: a sweeping demographic shift and the digitalization of communication.

First, Africa has the highest rate of population growth in the world. According to the World Bank and the UN Population Fund, the African population is expected to double by 2050 from 1 billion to nearly 2.5 billion. More than half—51%—will be younger than 25 years old.

With rapidly swelling populations and strained resources, young Africans have pressing needs—including education, health, vocational training and employment, and respect for their fundamental freedoms. They face crippling unemployment, poor access to education, and adverse health in a context of environmental crisis due to climate change and epidemic diseases like malaria, ebola, and COVID-19.

African state authorities have dismissed their legitimate claims and failed to protect social and economic rights, as stipulated by the African Commission on Human and Peoples’ Rights. In response, youth leaders have called out the opaque management of state resources, rampant corruption, highly repressive policies, constitutional malfeasance, and corporate cronyism. This year in Guinea, for example, young people celebrated when  Colonel Mamady Doumbouya justified the coup he led in response to the country’s political crisis, which encompassed the “dysfunction of constitutional institutions, the instrumentalization of justice, the serious and repeated violations of human rights and fundamental freedoms, the excessive politicization of public administration, widespread corruption, financial mismanagement and misappropriation of public funds”—many of the same issues that mobilized youth protesters in 2019 and 2020.

Second, this dramatic demographic shift is being accompanied by the widespread adoption of new digital technologies. According to the World Bank, fewer than 11.5 million Africans had mobile phone subscriptions in 2000. By 2020, the number had reached nearly 861 million.

With the  ubiquity of mobile phones, young activists have completely changed their communications strategies. Instead of distributing leaflets in the street, they are using text, video, and image messaging to coordinate. Social networks like YouTube, Facebook, Instagram, and WhatsApp let them organize virtual meetings, share real time information, and plan demonstrations at low to no cost. More access to the internet also means they can promote accountability and demand better governance by sharing examples of political mismanagement, denouncing their scandal-ridden governments, and providing critical real-time intelligence about state-sponsored human rights violations.

It is no surprise, then, that many African governments have reinforced their repressive arsenal with police equipment, street-view cameras, and digital surveillance tools. Or that legislatures have adopted oppressive new laws to deny freedoms of expression and association. Nor is it a shock that state authorities often jam communications during youth demonstrations and political unrest, and security services regularly track civil leaders.

In 1994, the UN Economic Commission for Africa and the Organization of African Unity—now the African Union—wrote that as Africa’s population increases, the demand for government services could translate into violence. For young people especially, a lack of hope and support make a dangerous mix.

But far from this dark picture, youth in Africa are full of promise. Young leaders across the continent are promoting self-entrepreneurship, creating start-ups, participating in their communities, and raising awareness about education, health, development and their collective rights and entitlements.

Instead of driving violence and instability, the explosive demographic growth in Africa could be a powerful factor in the continent’s development. But this will only be possible if African governments listen to their young populations' demands: : equity and social justice, effective employment policies, innovative industrial programs, transparent governance, and eco-friendly policies.

For Africa—and indeed, the world—to address challenges like climate justice, conflict transformation, and food security, the participation of youth activists will be critical. But their potential is still chained by their transitional status.

There is an urgent need to foster intergenerational partnerships and to change deeply rooted perceptions and attitudes about young activists.

As Interpeace USA director Graeme Simpson wrote in a letter to the UN, “youth occupy a grey area between the rights and protections afforded to children and the rights and political entitlements that they should — but often do not — enjoy as young adults. This rights realization gap must be addressed, fully establishing youth as rights bearers.”

There is an urgent need to foster intergenerational partnerships and to change deeply rooted perceptions and attitudes about young activists. Activists from different generations work face-to-face often, but seldom side-by-side. Too many adults still see youth activists as pretentious, unrealistic, or misguided. In doing so, they overlook the incredible capacity for mobilization and technological advances that youth movements have harnessed.

This gap must be bridged to empower a new generation of civic leaders. Instead of dismissing youth-led activism, activists from older generations should pursue genuine partnerships and offer their experience as a source of knowledge rather than a point of superiority. The issues transcend generation divides–so should the response.

One opportunity to come together is to confront the dangerous spread of misinformation. Activists young and old are   exposed to the threat of manipulation. Politicians, online conspiracy groups, and radical religious extremists all seek to influence impressionable people and control the narrative. Disinformation and conspiracy theories can easily lead to political unrest, ethnic conflict, or the stigmatization of minorities. Preventing its spread will require both experienced leadership and tech-savvy strategies.

A century ago, in 1895, Gustav Lebon wrote in his seminal work La psychologie des Foules that, “It is no longer in the councils of princes but in the soul of the crowds that the destinies of nations are prepared.”

Souleymane Sagna is the program officer for children’s rights at the Fund for Global Human Rights. He lives in Dakar, Senegal.