The UN-sponsored International Commission Against Impunity in Guatemala (CICIG) has shaken the country’s political system to its core. However, the long-term consequences remain to be seen.

The International Commission Against Impunity in Guatemala (CICIG)—founded in 2007 by a mutual agreement between the UN and the Guatemalan government—has shaken up the country’s entire political system. The Commission’s original mandate was aimed at dismantling organized criminal bands that ran rampant after the end of the country’s brutal 36-year armed conflict, including training and supporting the Public Ministry, the National Police and other entities of the Guatemalan state. CICIG was also conceived as an international support mission to “build-up” judicial institutions in Guatemala. Since its inception, the Commission has developed into a powerful political force, amassing significant legitimacy in the eyes of many Guatemalans. The commission’s success and prominence was a welcome development, gaining support outside of the elite circles.

To this day, the Commission has investigated and helped prosecute dozens of allegations of corruption reaching the highest echelons of Guatemala’s political elite. The most notorious of these was the discovery of a deep-rooted criminal network in various state organizations, leading to the eventual arrest of the scheme’s masterminds, President Otto Perez Molina (2012-2015) and Vice-President Roxana Baldetti.

This discovery—known as “La Linea” scandal, an allusion to the wiretap used by investigators to gather evidence—triggered protests by broad sectors of the population. The public uproar led to Perez’ and Baldetti’s removal from office and their eventual incarceration, and support soon followed for “anti-establishment” candidate Jimmy Morales, who came to power in early 2016. These protests in 2015 were unlike anything seen before in that the violence and repression characteristic of Guatemalan history was absent, with demonstrations remaining largely peaceful. There is now a sense that everyday individuals can effect change in Guatemala and that politics are no longer reserved for the elites. 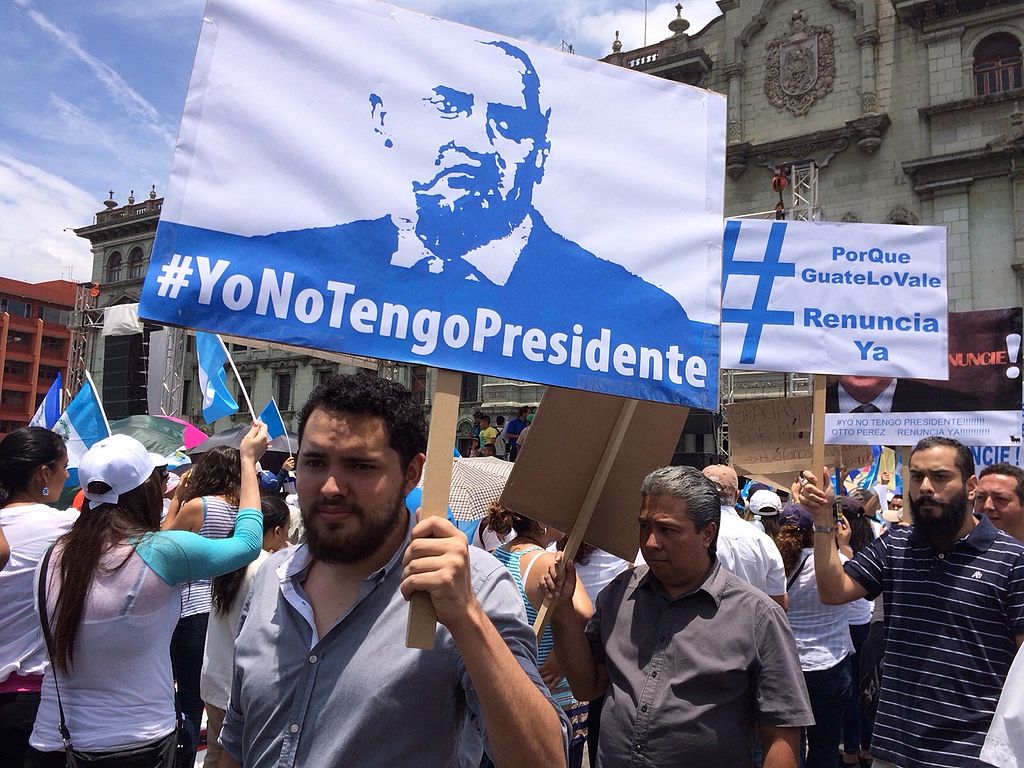 Under the guidance of the commissioner, Iván Velásquez Gomez, the CICIG has pursued a range of highly symbolic cases, some of which can be interpreted as moving beyond its original mandate. The commissioner’s cases have ranged from false murder allegations against president Alvaro Colom (2008-2012) to crimes against the environment by an Israeli engineering firm. More importantly, Velásquez Gomez has exposed the rampant kleptocracy that has undermined Guatemalan state institutions for years.

Unfortunately, a large number of politicians do not welcome the far reach of CICIG’s investigations. Whilst some political factions celebrate the Commission when the organization is investigating their rivals, they strongly resist any attention on their own ranks. Former vice-president Eduardo Stein (2004-2008), for example, was one of CICIG’s staunchest defenders, initially claiming: “Under arguments of supposed national sovereignty, CICIG critics are covering up corruption schemes. In the executive, we accept that our institutions have been permeated by organized crime.” However, once Carlos Vielmann Montes, Minister of Governance, came under CICIG investigation, Stein withdrew all support, saying: “the problem is that without proper supervision, the CICIG has gone wild.” Ironically, Stein went on to criticize the organization for allegedly bending to the political pressures of his party’s opponents. Vielmann Montes was found guilty of the extra-judicial killings of several prisoners, and he is suspected of money laundering, drug trafficking, kidnapping, extortion and prostitution. He was arrested in 2010 in Madrid, after fleeing from Guatemalan authorities.

In spite of some activism at the grassroots level, there is still not enough articulation by civil society leaders to call out and address the structural features in the Guatemalan system.

Yet for all its good work, the organization’s mandate runs out in September of 2017, begging the question: what happens next? As is the case with many sporadic mobilizations, the mass movement connected to the CICIG lacks a clear direction or goal. In spite of some activism at the grassroots level, there is still not enough articulation by civil society leaders to call out and address the structural features in the Guatemalan system that support state-sponsored corruption. The Commission has released a series of suggestions and a road map for moving forward, but it is up to Guatemalans to continue changing their system for the better.

In addition, it is hard to know who the “good guys” are in Guatemala today. The chatter in policy circles tends to focus on who is going to be unmasked by the CICIG next. Individuals like former attorney general Claudia Paz y Paz and judge Thelma Aldana have shown the courage to take on corruption, but both have been constantly sidelined by traditional political elites. Newcomer president Jimmy Morales has talked a big game on addressing corruption, but his party’s inner circle, composed of many retired military men, has been accused of drug trafficking and of massacres that the UN equated as genocide. The president’s brother (and close political advisor) and son are also currently under investigation for shady business dealings.

As a result, over-reliance on the CICIG is a key concern going forward. Commissioner Iván Velásquez has carried the Commission since 2013 and the organization’s has been most successful under his skilled guidance. An acclaimed Supreme Court Justice in his native Colombia, Velásquez took rein over the organization when its future was in doubt. His personal approach, steady hand and fearless nature have made him a local hero of sorts.  But once the mandate is over, there is no clear person or group that will be willing to carry on the good work. Furthermore, given the deep permeation of organized crime in Guatemalan politics and the high levels of corruption, there doesn’t seem to be a local champion that civil society can trust.

While the CICIG changed Guatemala for the better, it remains to be seen whether these changes are sustainable, or if the success can be replicated elsewhere. The Organization of American States (OAS) has implemented a similar mission in Honduras, known as the Mission to Support the Fight against Corruption and Impunity in Honduras (MACCIH, for its initials in Spanish). However, the collaborative nature between certain state authorities and the CICIG, Velásquez’ unique leadership and the degree of legitimacy the UN carries is what makes the Guatemalan case hard to replicate. MACCIH doesn’t have power to prosecute or investigate individuals, for example. US interests in the region also helped sustain the Guatemalan endeavour, which might be hard to duplicate elsewhere. Finally, external geopolitical forces permit the CICIG to operate freely, as Guatemala is one of the few places not caught between great power struggles.

Uncertainty about the future reigns today in the battered Central American nation. CICIG’s experiment in Guatemala has been largely successful thus far. However, Guatemalans have a long road ahead if they are going to eventually stand on their own.