The closing of civic space is not just about people’s right to organize or protest in individual countries. This year’s Gobal Risks Report, published last week by the World Economic Forum ahead of its annual Davos meeting, looks in detail at the risks posed by threats to governments clamping down on fundamental civic freedoms. The report points out that, “a new era of restricted freedoms and increased governmental control could undermine social, political and economic stability and increase the risk of geopolitical and social conflict.”

Indeed, the recently launched CIVICUS Monitor shows that more than 3.2 billion people live in countries in which “civic space” is either closed or repressed. It also shows that conditions very few countries—16 out of 134 countries with verified data—are genuinely open. This means that scope for citizen action is constrained and getting worse in much of the world, including some countries where one might least expect it. The spillover effect to other countries also cannot be understated.

Scope for citizen action is constrained and getting worse in much of the world, including some countries where one might least expect it.

Glaringly absent from the WEF report, however, are any examples of countries where these trends are evident, so here are five examples from five different parts of the world of countries that demonstrate just how much citizen action is under threat in 2017.

Already one of the worst places in the world for civic freedoms, 2017 didn’t begin well for human rights activists in Burundi after the government shut down Burundi’s oldest human rights organisation, Ligue Iteka. Journalists and media organisations have also been targeted. The situation in Burundi is so bad that the government is silencing the very people and institutions that could monitor rights abuses and undemocratic developments. Far from signifying a lull in human rights violations, the lack of information flowing from the country reflects the silencing of critical expression and the prevailing climate of fear, and this also explains why no significant public demonstrations have taken place in recent months.

One deeply worrying dimension of Honduras’ high crime rates is the impact this is having on citizen action. Journalists, environmental activists, and gay rights campaigners have been among those most vulnerable to violence. This is made worse by the fact that government efforts to investigate and prosecute violence against members of these groups have made little progress. The murder of world-renowned environmentalist Berta Caceras in March 2016 was a tragedy in itself but made worse by the fact that this attack was far from isolated, and that peaceful protests have been met by police brutality and with suspected surveillance of media outlets. 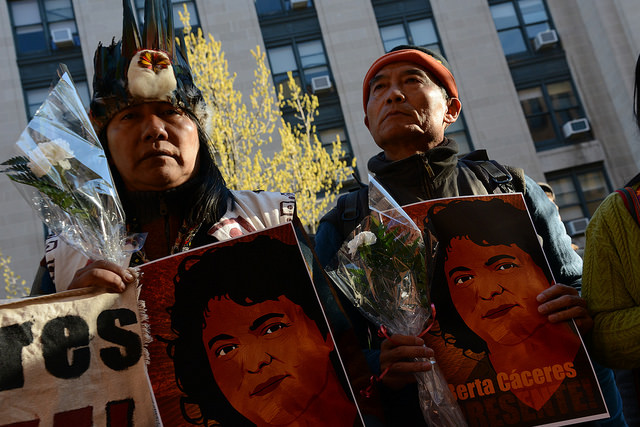 A memorial to Berta Cáceres, a murdered Honduran environmentalist and human rights activist.

President Rodrigo Duterte successfully courted controversy in 2016 but his flamboyant political style had very real consequences for the Filipino people. Thousands of citizens were killed in extrajudicial killings openly encouraged by Duterte as part of a so-called war on drugs. Activists and NGOs fear that the war is merely a thinly veiled excuse to permanently silence dissent against Duterte and his government. Mirroring many other similar political contexts, the assault on civilians comes hand in hand with direct attacks on the media, with President Duterte even endorsing the killing of "corrupt" journalists.

The Arab Spring may seem like ancient history for citizens in Turkey trying to assert their rights to peacefully assemble and express themselves. The people of Turkey saw their democratic rights shrink at an alarming pace in 2016. On a single day in November the Turkish government suspended 370 NGOs, due to their alleged links with the opposition groups, including the Gulen movement, the Kurdish PKK and left wing organisations. The fragile political and security situation in Turkey is not a sufficient justification for limiting citizens’ rights to peacefully assemble and express themselves. Yet, the Turkish government, under President Recep Tayyip Erdoğan is employing similar tactics to many other governments by using security threats as a cover to tighten its own grip on power. Turkey is also one of many countries where gay rights activists have been targeted for speaking out: a pride parade planned in Istanbul in June 2016 was banned and then disrupted by authorities.

The strength of the United States’ Constitution means that US citizens have some of the best protected democratic rights and freedoms in the world. And yet, recent events suggest that even the constitution—the vision of the US founding fathers—may be under threat. President-elect Donald Trump has shown little respect for the First Amendment to the constitution, which guarantees freedom of expression. In November, he controversially tweeted that those who burn the American flag should be sent to jail, even though the Supreme Court deemed this act legal since 1969 on First Amendment grounds. Trump has also repeatedly attacked the freedom of the press, including through litigation and at his most recent press conference this month, where he refused to speak to CNN and called the media outlet “fake news”. The harsh policing of #BlackLivesMatter and Standing Rock protests have called into question Americans’ right to peaceful assembly. Maina Kiai, the United Nations Special Rapporteur on these issues, noted serious concerns about how citizen action is being curtailed in the US. Ominously, he concluded that, “people have good reason to be angry and frustrated at the moment. And it is at times like these when robust promotion of assembly and association rights are needed most.”

There perhaps lies the most concerning aspect of the global trends on civic space: measures to limit the scope for citizens to organise and mobilise come just as people the world over are frustrated with established political institutions and actors. If we do not create the spaces and opportunities for people to vent these frustrations and articulate their aspirations in constructive ways, we could see social conflict intensify across the world. This problem is about far more than a few country examples. When this unrest spills across borders, especially when it stems from big powers like the United States, it creates a very real risk for further geopolitical instability—a risk we can no longer afford to ignore.