An ‘every-country-for-itself’ approach is irrational and even counterproductive, yet that is exactly what has happened.
By: Jayati Ghosh 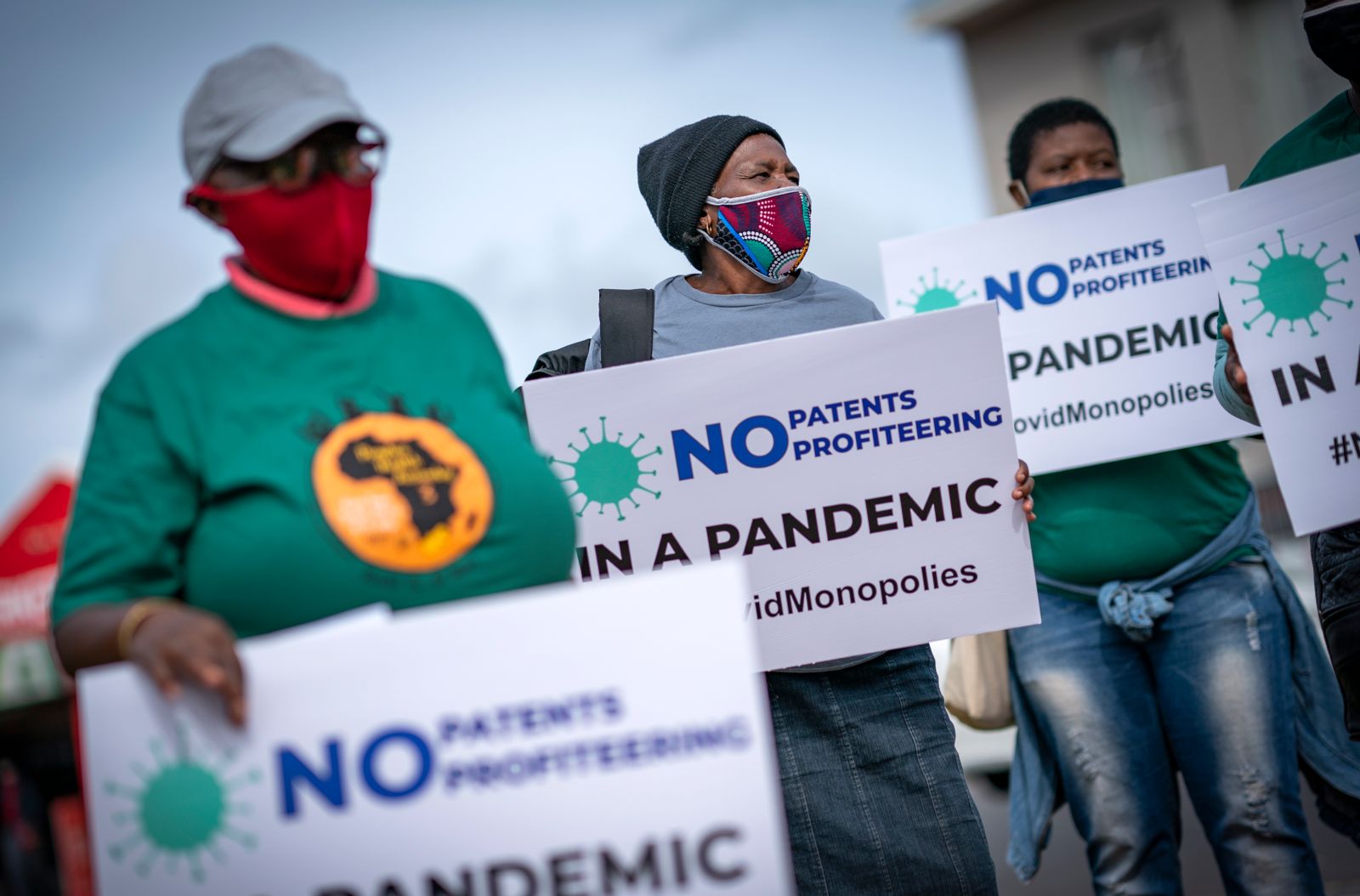 Members of the People's Vaccine Campaign of South Africa (PVC-SA) protest outside the Johnson & Johnson offices in Cape Town, South Africa in March 2021. The People's Vaccine Campaign of South Africa, a coalition of over 150 organisations, protested at Johnson & Johnson calling for them to drop patents and other intellectual property protections to end what they called vaccine apartheid and ensure there is just, fair and equitable access to Covid-19 vaccines. PVC-SA protested in all major cities across South Africa calling their campaign a fight against vaccine imperialism demanding fair pricing and access to vaccines for all. EFE/EPA/NIC BOTHMA

The Covid-19 pandemic has been unusual in several ways: the disproportionate extent to which people in rich countries have been affected; the sheer scale of the policy response for containment; and the speed and urgency of the global response.

The active interest in controlling the pandemic in rich countries shaped individual national responses as well as global policy. There was a massive push for vaccine development, through large subsidies for research and development to drug companies, pre-orders of vaccines, and other support by the US, Russia, China, and some European countries. This ultimately led to the development of several effective Covid-19 vaccines in an unprecedented short timeframe.

Yet, despite the good news, subsequent vaccine production and distribution has exposed and intensified global inequality. Three features stand out: blatant vaccine grabs by rich countries; protection of patent rights by governments in advanced countries, which prevents wider vaccine production; and the use of vaccine distribution to promote both nationalism and diplomatic ‘soft power.’

An ‘every-country-for-itself’ approach is irrational and even counterproductive,yet that is exactly what has happened. Wealthy countries and individuals have monopolized early doses of the Covid-19 vaccines. Forty-four bilateral deals between governments and pharmaceutical companies (dominated by rich countries) were signed last year, and at least twelve have already been signed this year. Rich countries are now stockpiling vaccines that they have grabbed but are unable to distribute.

This vaccine grab by rich countries means that most of the world would get safe and approved vaccines only in 2022 and in some cases not even until 2024.

This need not have occurred. The Covid-19 Vaccines Global Access Facility (COVAX), led by the World Health Organisation (WHO) and others, was established precisely to prevent hoarding by rich countries and ensure access for the world’s poor. But the facility remains underfunded, and, even worse, it has not been able to purchase the vaccines required for free distribution to poor countries as planned.

It seems obvious that a pandemic can be overcome only when it is overcome everywhere. The delayed vaccination of people across the world increases the possibility of virus mutation, reducing the ability to control the pandemic even in rich countries that have bagged vaccines. Prolonged fear of infection, because of inadequate vaccination, affects economic prospects, inhibiting and delaying global economic recovery. These risks are so great that rich countries would still benefit even if they decided to pay on their own for vaccinating the entire world’s population.

The Unjustified Protection of Intellectual Property

Insufficient production is an important reason behind  poor and unequal vaccine distribution. Yet this scarcity is completely unnecessary and could be easily and rapidly remedied. The major factor limiting the supply of approved vaccines is the persistence of patent rights that give pharmaceutical companies a monopoly on production, confining supplies to their own capacities and the few production licences they choose to issue to others.

Patents are usually seen as providing a necessary financial reward for invention/innovation, without which technological change would either not occur or be more limited. Yet for Covid-19 vaccines, many big pharma companies received massive government subsidies that have mostly, and in some cases completely, covered research and development costs. Private pharma companies also benefited from prior public research and reduced clinical testing costs. The ‘leader’ vaccines may have already received what could be considered reasonable returns on their investment and more.

It seems obvious that a pandemic can be overcome only when it is overcome everywhere.

The restricted production creating unseemly vaccine grabs, overpriced and differentially priced doses determined by private suppliers, and inadequate provision for most of the world’s population could all have been avoided if a proposal brought by India and South Africa to the WTO in October 2020 had been accepted. This proposal was for a waiver of obligations to enforce patents and other intellectual property rights related to Covid-19 products.

This meant that WTO members chose to grant or enforce patents and other intellectual property related to all Covid-19 drugs, vaccines, diagnostics, and other technologies. With it, they also prevented  collaboration in research and development, technology transfer, manufacturing, scaling up, and supplying Covid-19 tools.

A global move for suspension and/or modification of intellectual property rights for matters relating to essential public health concerns is thus essential.

Other vaccine candidates being developed elsewhere also have the potential to combat the pandemic and ease the current shortages, including those developed in China and Russia and the ones in development in India, Cuba, and elsewhere. Some have concerns about inadequate testing and hasty regulatory approval without the required trials and other processes. But even when these vaccine candidates are found to be safe and effective through clinical trials, there are further hurdles to their being accepted internationally.

This is largely because the WHO’s approval process is heavily skewed in favor of vaccines developed in rich countries. The WHO has a list of ‘stringent regulatory authorities’ it trusts for quality control, which are only from developed countries in Europe, the US, Canada, Australia, and Japan. For the rest of the world, vaccine (and other drug) candidates are required to go through ‘prequalification’— a much more complicated and extended process. This greatly prolongs the time taken before vaccines from other countries are approved.

In this pandemic, the usual regulatory standards have been greatly relaxed across the world, including in developed countries. No Covid-19 vaccine has been developed or released as transparently as it should have been. Even if WHO feels the regulatory standards in other countries might be less stringent, it could still work with different national regulatory authorities to ensure that all vaccine candidates are treated on an equal footing. Given the global scarcity that is denying people in poor countries access to vaccines, the WHO should take a proactive approach to enable global distribution of such vaccines when they meet some harmonised standards. If this is done, it may be possible to circumvent the stranglehold of the big pharma companies on Covid-19 vaccines, which enables private profiteering amid a health crisis and widespread economic distress.

Overall, the global distribution has been unequal, unjust, and incompetent. This approach will delay the resolution of the ongoing pandemic and creates concerns about humanity’s ability to cooperate to address the even greater challenges ahead.

Jayati Ghosh is an Indian development economist and is the chairperson of the Centre for Economic Studies and Planning at the Jawaharlal Nehru University, New Delhi.  Her core areas of study include international economics, employment patterns in developing countries, macroeconomic policy, and issues related to gender and development.