Although the plan was initiated by the government, it seems likely that private enterprises will be asked to play a significant role at all stages of the process. 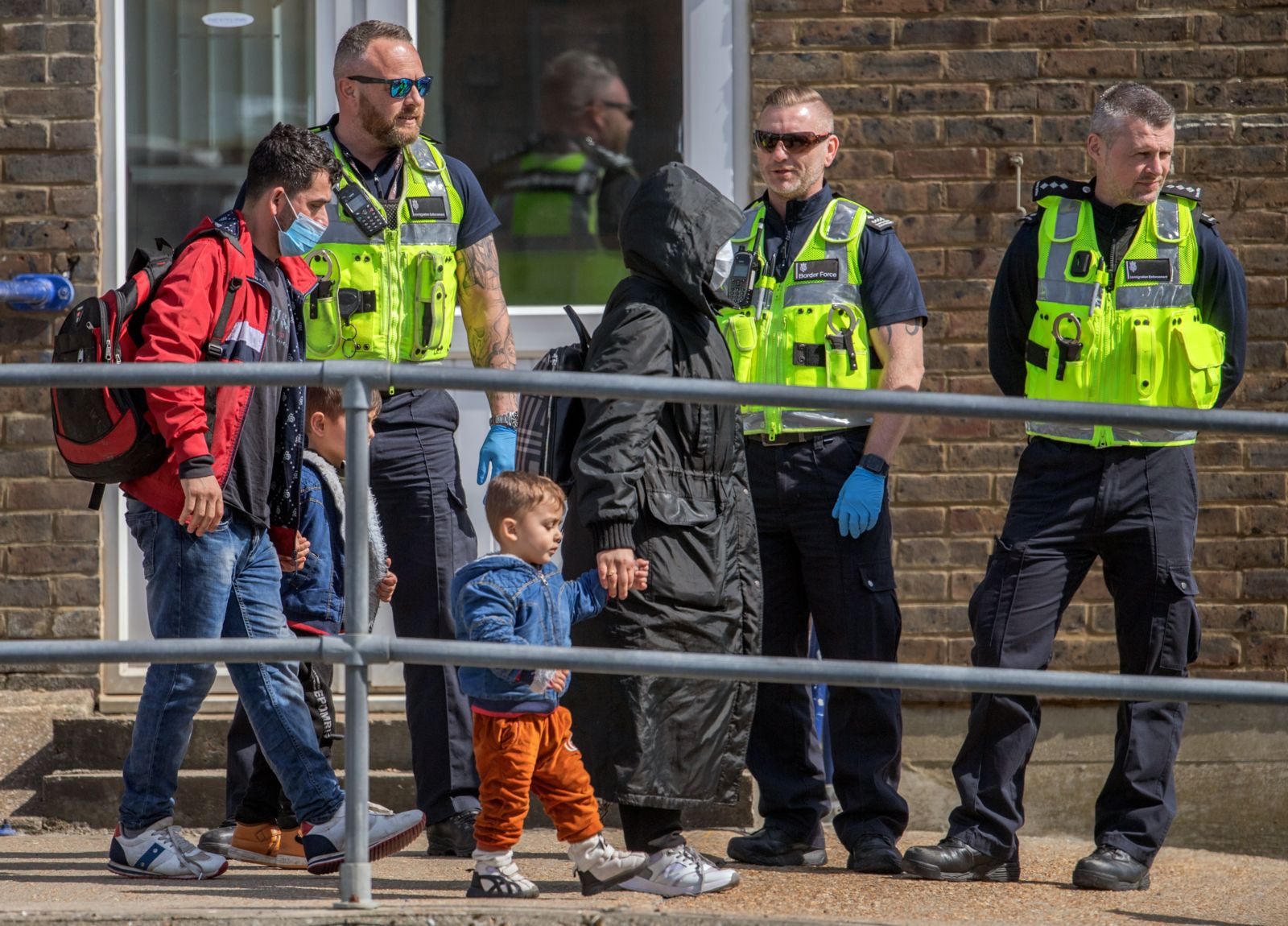 Migrants are escorted by Border Force officers and members of the military after crossing the English Channel in Dover, Britain, in April 2022. Under a scheme designed to crack down on migrants landing on British shores after crossing the Channel in small boats, the UK intends to provide those deemed to have arrived unlawfully with a one-way ticket to Rwanda. EFE/EPA/STUART BROCK

The recently announced plan to forcibly export asylum seekers from the UK to Rwanda is, according to UNHCR, likely also to be illegal under international law. States which are party to the 1951 UN Refugee Convention cannot legally derogate from their fundamental responsibilities. Sending refugees who have a well-founded fear of persecution back to their country of origin, or another state where they might be unsafe, violates the principle of non-refoulement. Whether the refugees have used legal means to arrive at the border should not be held against them.

The UK government’s plan is still scanty in detail but other governments will be watching closely as uncontrolled migration is a volatile political commodity, and the appearance of control helps to win elections. Although the plan was initiated by the government, it seems likely that private enterprises will be asked to play a significant role at all stages of the process. Even within the terms of the UK’s own logic, the plan will succeed in undermining existing cross-English Channel smuggling only if it succeeds at scale.

It is hard to imagine that the British military or prison system will have the capacity or inclination to forcibly detain and transport tens of thousands of asylum seekers against their will to sub-Saharan Africa every year. The total number of annual deportations from the UK is currently 2,300 while the number of asylum claims is almost 50,000. In effect, the Rwanda plan could mean a 20-fold increase in deportations, inconceivable without significant private sector involvement. So, we can assume that business will be asked to cooperate and implement.

Since the 1990s, airlines, ferry, and train companies have become the frontline of the UK’s immigration control, with carrier liability legislation fining companies heavily for letting passengers travel if they do not have the correct visas and other paperwork. This is an approach now common amongst OECD member states. Given there is no such thing as an ‘asylum-seeker visa’ for coming to the UK, and visas have been imposed on nearly all non-OECD countries, most asylum seekers can no longer use regular, safe transportation to make their journey, and they are at the mercy of smugglers and traffickers.

Although particular business actors spoke up against being forced into complicity at the time, some companies have fallen quiet under threat of sanction or threats of prosecution. Travellers have long been accustomed to companies inspecting their travel documentation, visas, certificates, and so on each time they fly, take a ferry, or the Eurotunnel. For most passengers, these practices are no great inconvenience, although there are legitimate concerns about the security of the data that companies gather.

Forcible removals are another matter. Currently, the UK Home Office has to charter entire flights to remove individuals or small groups of mostly non-refugees—e.g., overstayers, undocumented immigrants, failed asylum seekers—to Caribbean countries, as most airlines will not cooperate in this practice even when the UK Government is legally entitled to do so. Given that the removal of asylum seekers to Rwanda is likely to be illegal under international law, we can assume they will not be flown on scheduled flights by international carriers. What kind of companies will operate these charter flights? Where will the planes and crews come from? Which company would wish to be at the forefront of contributing to an abuse of human rights?

Although particular business actors spoke up against being forced into complicity at the time, some companies have fallen quiet under threat of sanction or threats of prosecution.

In fact, the government’s action undermines its own promotion of the UN Guiding Principles on Business and Human Rights around the world, which states that business must respect “all internationally recognised human rights,” such as the right to asylum. Even many of the private security companies that detain and accompany asylum-seekers are governed by their own code based in international law and human rights.

Apart from the forcible removal of asylum seekers, there is the question of housing. The Australian model, in which nearly all asylum seekers are removed to neighboring countries for processing, and on which the UK plan seems to be based, is outrageously expensive and deeply unpopular with companies. In the case of Australia, most hotel companies would not allow their hotels to be used as part of the export or import of asylum seekers from the Australian overseas detention centres. Besides creating terrible optics from a public relations perspective, there are serious concerns about the health and welfare of the asylum seekers, including the risk of self-harm.

Perhaps ironically given the UK's own plans against Rwandan asylum seekers, the Australian Liberal Party Government secretly 'swapped' the last child asylum seekers held in Nauru in 2019 with the US for accused Rwandan murderers. The then US President Trump publicly admired the Australian asylum system almost as much as UK Home Secretary Priti Patel does.

Investors have been heavily mobilised in Australia to oppose the system in their country, and this will likely be the case in the UK too, should this plan proceed. Investors keen to comply with the emerging norms on Environmental-Social-Governance (or ESG) compliant investing are hardly likely to invest in a hotel, security, or aircraft leasing company which is involved in a system that resembles in some ways the very acts of illegal smuggling that it claims to be preventing.

Western governments cite international law when it comes to business boycotts of sectors of the Russian economy because of the horrendous violations in Ukraine. Do not be surprised if companies are lukewarm in responding to Boris Johnson’s asylum plans, and the companies that do sign up, face pressure of boycotts and divestment. Other governments, and businesses, will be watching closely.

John Morrison is CEO at the Institute for Human Rights and Business. He has researched and written widely on the issue of the trafficking and smuggling of asylum-seekers, including independent reports for UNHCR and the British Refugee Council. He now advises governments, UN agencies, businesses and civil society organisations on non-state actors within the global economy.