The Inter-American Human Rights System is an important tool for Latin American human rights defenders, but why are the Court and the Commission lagging behind on climate change issues?

Looking back to the creation of an international “Climate Regime” in 1992, it is quite clear that the concern posed by climate change is nothing new. However, what is relatively new is the increasing attention on the connection between human rights and climate change. This combination has drawn the attention of academics and resulted in considerable research; it has also  engaged practitioners, who are taking this debate to national courts and starting to develop interesting jurisprudence. In addition, UN human rights bodies are issuing new resolutions and reports about the importance of the interdependence of both issues. Finally, the Paris Agreement stresses that climate action should entail the protection of human rights.

In Latin America—just as the rest of the world and particularly the global South—the burden of destruction in the context of climate-related impacts is asymmetrically borne on marginalized groups. Severe droughts in Brazil, the rapid glacier retreat in Peru, or the emergence and spread of new vector-borne disease are all evidence that millions of people and different kinds of ecosystems are already being affected in an uneven manner. Despite the increased international attention to the link between climate change and human rights, regional human rights mechanisms have taken longer to address this issue. The Inter-American Human Rights System, unfortunately, is no exception.

Most human rights defenders in Latin America, however, know it is imperative to work hand in hand with the Inter-American Human Rights System (IAHRS). This is not only because it represents an opportunity to access justice, but also because the institutions that comprise the IAHRS—the Commission and the Court—are constantly expanding the frontiers of international human rights law. Each new admitted case demonstrates, on the one hand, the necessity of dynamic interpretation of the law concomitant to new social issues, and on the other, the historical relevance of the IAHRS for echoing the voices of victims and crystallizing them onto law.

For instance, civil society and human rights defenders, both at a national and regional level, strategically use some of the mechanisms the Inter-American Commission on Human Rights (IACHR) provide under its Statute and Rules of Procedure, like holding thematic hearings to deliver updated information on the developments of different issues. This mechanism is very useful for raising multiple but interconnected matters, such as the inter-relation between human rights and the environment, a phenomenon already addressed in the context of extractive industries encroaching upon indigenous peoples’ rights. During said thematic hearings, it is always quite rewarding to notice the concern and the receptivity from the Commission to most of these types of intertwined cases, demonstrating its will to advance the human rights agenda in the region. For instance, the IACHR held a hearing in 2014 on the situation of human rights defenders in the Americas, indicating that defenders that are particularly exposed to risk are, inter alia, campesinos, indigenous/community leaders and environmental/land activists.

The Inter-American Court of Human Rights has also repeatedly validated their will to integrate different dimensions of human rights, including the environment, land, culture and property, as shown by its noteworthy jurisprudence with an environmental character. One example is the Court’s actions in 2010 in Sarayaku v. Ecuador—a case in which the indigenous Sarayaku people filed a complaint against the Ecuadorean government for allowing an oil company to carry out oil exploration without prior consultation. The Court established, as a general principle of international law, the obligation of states to ensure a meaningful consultation process prior to indigenous peoples’ rights and their environment being affected by a project or program. This decision, which built upon previous jurisprudence with analogous factual backgrounds, was a game-changer for environmental governance. 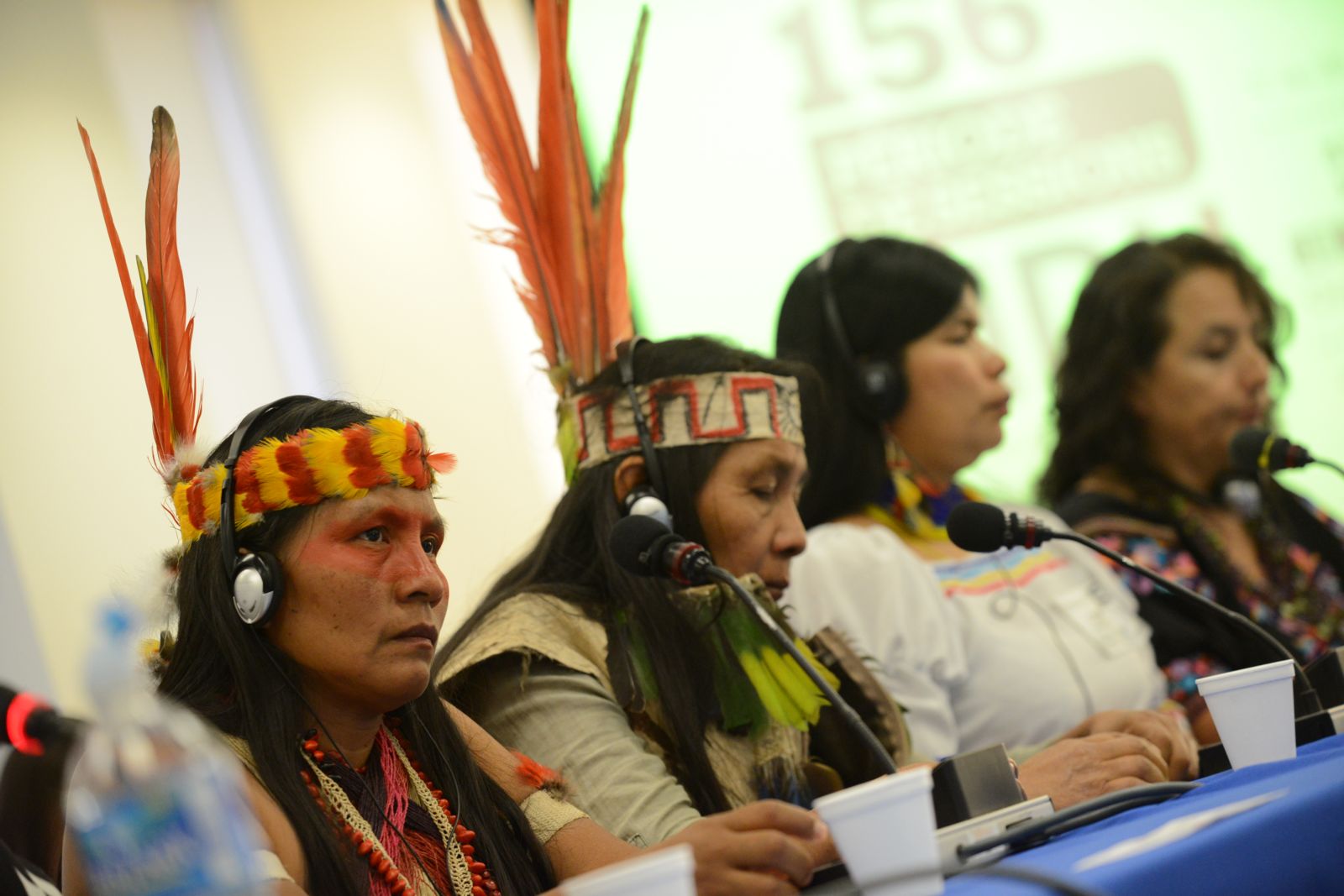 The Sarayaku people meet to defend their land from Ecuadorian oil exploration.

With that said, even if both the Commission and the Court have been instrumental for advancing an environmental agenda via human rights in the region, they have been slow to move forward a climate justice agenda. This is illustrated by the rejection of a petition filed in 2005 by the Inuit peoples of the Arctic region before the IACHR, whose justification for a negative response was that the information was insufficient for the Commission to determine a violation of the rights protected by the American Declaration, although a thematic hearing on Global Warming and Human Rights in the Arctic was held. It is difficult to understand how the already significant environmental jurisprudence of the Court, and the reports prepared by the Commission on human rights impacts derived from environmental degradation, have not already paved the way for a mainstreamed climate change narrative, which would have helped the Inuit petition.

There is a myriad of reasons behind the reticent development of a climate change narrative within the IAHRS, ranging from a silos approach to human rights—enhanced by the unfamiliarity of climate change—to the prioritization of pressing issues in the region, which is manifested in IACHR’s reports mostly focused in civil and political rights.  However, the most salient reason is the absence of a right to a healthy environment in the American Convention on Human Rights. Moreover, even if the Additional Protocol to the American Convention on Human Rights in the area of Economic, Social and Cultural Rights, does include the right to a healthy environment, it is not directly enforceable, but merely programmatic, as it is stated in its article 1.

Despite these procedural obstacles, as human rights and climate change become inextricable, the Commission and the Court must use all the tools available to them to address these issues. One way to do it is by adopting, in a timely manner, provisional measures aimed at effectively protecting environmental defenders at risk for holding corporations accountable. A good example is the Independent Indigenous Lenca Movement of La Paz (MILPAH) in Honduras, which is resisting the construction of hydropower projects on Lenca territory, a dangerous activism which has led to the killings of some of its members. Another way is to engage the Commissioners and the Rapporteurships to conduct a report on the issue of human rights and climate change in the region, bearing in mind the monitoring role of the newly created Special Rapporteurship on Economic, Social, Cultural, and Environmental Rights, which might become a useful link between the IACHR and environmental defenders.

Since most of the progress in human rights more generally, and in Latin America specifically, comes from the work and persistence of civil society, both human rights and environmental defenders should collaborate to address mutually important cases. It is pertinent to carry out a thorough and multidisciplinary look at different sources of law, combined with socio-political and scientific evidence provided by academia. By taking advantage of the flourishing domestic climate litigation around the world, human rights defenders should study the judgments and arguments and examine their potential use in human rights cases.

This collective action will not only contribute to uniting regional civil society on an issue of global concern, but it will accelerate the bridging of environmental conservation and human rights protection. By working together, human rights and environmental activists can make the case for emissions reductions based on states’ compliance with existing international law obligations—including their obligations to human rights.