The new “Yazidi Female Survivors Law”, while groundbreaking, is too narrow to address the needs of some of Iraq’s most vulnerable communities. 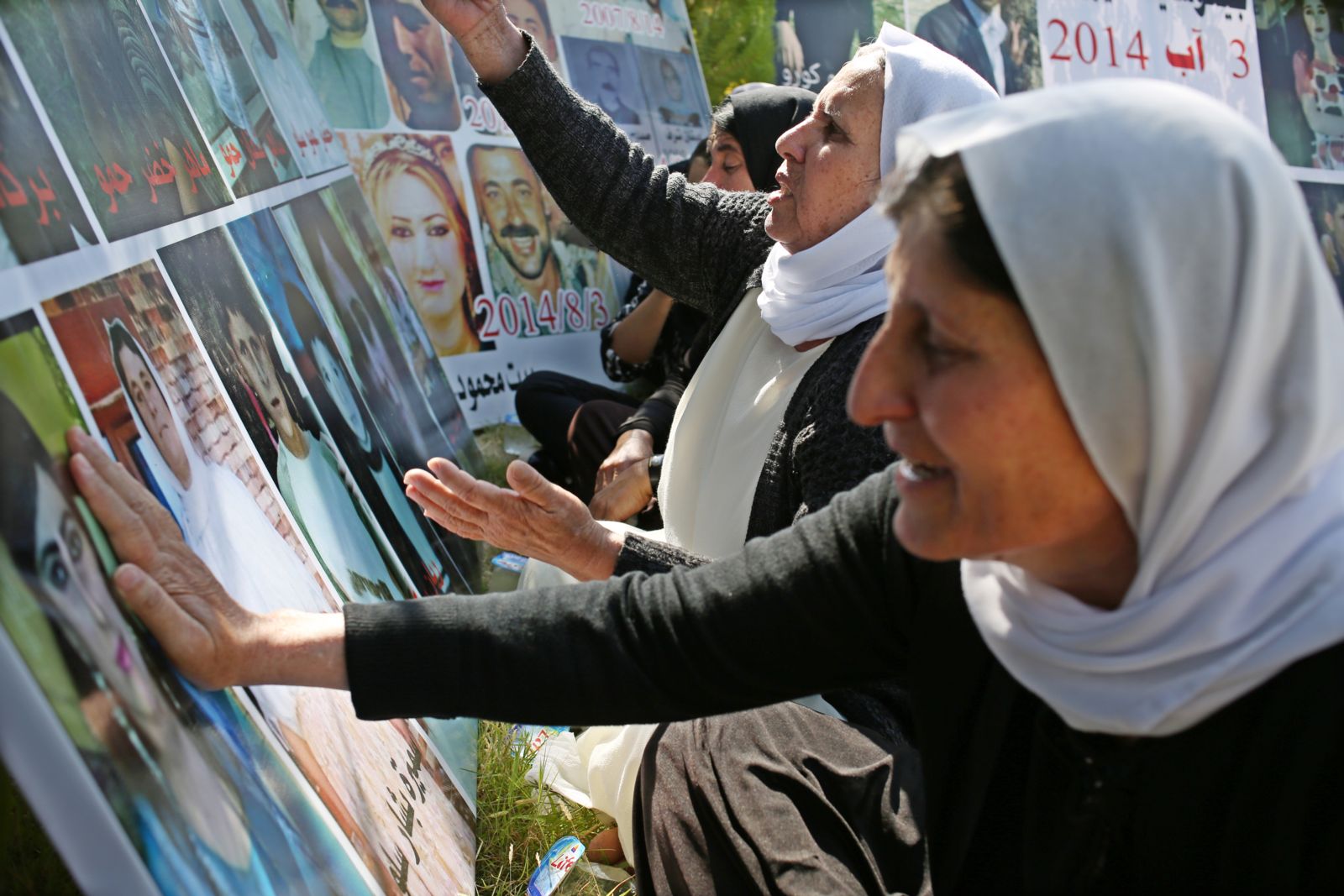 Yazidi ethnic mourners cry in front of pictures of victims, during the fifth anniversary of Yazidi genocide by Islamic State in Baadre, 25 km south east of Duhok Kurdistan region in Iraq on 03 August 2019.  EFE/EPA/GAILAN HAJI

The COVID-19 pandemic has exacerbated existing inequalities in Iraq, further endangering vulnerable populations, including sexual violence victims and survivors. These survivors are particularly vulnerable with the reported resurgence of the Islamic State in Iraq, making reparations for victims and survivors of conflict-related sexual violence urgent to prevent their re-victimization and the recurrence of these crimes.

The armed conflict that spread across Iraq after the emergence of the Islamic State raised existing violence to an unprecedented level. Sexual violence was used as a tactic of war, oppression, and destruction during Islamic State’s reign of terror, particularly systematic sexual violence inflicted against minority groups, including Yazidi women and girls. Amnesty International reported that Islamic State fighters systematically targeted thousands of Yazidi women and girls, forcing them into sexual slavery. The UN Human Rights Council’s Commission of Inquiry for Syria found that the Islamic State demonstrated “intent to destroy the Yazidi in whole or in part,” and that these crimes were acts of genocide. Despite overwhelming documentation and evidence of atrocity crimes, victims and survivors of conflict-related sexual violence in Iraq have not been offered a formal path to justice or accountability to date.

In March 2019, Iraqi President Barham Salih submitted the “Yazidi Female Survivors Law” to Parliament for review. The draft law introduces a number of significant reparation measures for Yazidi women captured by the Islamic State, including compensation, rehabilitation, medical treatment, and economic opportunities. The draft law recognizes the crimes against the Yazidis as genocide and stipulates that perpetrators of “abduction and captivity” not be included in any “general or special amnesty.”

The draft bill, while groundbreaking, is too narrow to address the needs of some of Iraq’s most vulnerable communities. The bill appears to have been drafted with little input from affected communities, excluding a number of the victims’ primary demands. A new report by ABA Center for Human Rights proposes revisions to make the bill’s reparations more responsive to the unique needs of victims of one particular subset of atrocity crimes: sexual violence.

Despite overwhelming documentation and evidence of atrocity crimes, victims and survivors of conflict-related sexual violence in Iraq have not been offered a formal path to justice or accountability to date.

A primary critique of the draft bill is its narrow focus on kidnapping and on a limited group of victims, excluding many crimes committed against men and boys, as well as women and girls of other religious or ethnic groups. Broadening the draft bill’s focus to all victims and survivors of sexual violence would provide a start toward Iraq’s larger obligation to all victims of human rights violations by addressing the needs of a particularly vulnerable and targeted group and subset of crimes that are often under-reported and under-prosecuted. Importantly, comprehensive reparations can also address the immediate needs of victims and survivors by providing medical and psychological care, restoring access to education and economic opportunities, resolving parental status, and locating missing family members. Furthermore, the reparation regime should provide the families of disappeared victims with access to available reparation measures and address their right to information about both reparations and the violations that occurred. Reparations that give victims and their families a role in creating social change can be transformative, countering structural inequalities in society.

The draft bill does not cover all the crimes that were allegedly committed, even though international human rights law requires that the right to a remedy be applied without discrimination. In response, the Center has recommended that the draft law be revised to include all victims and survivors of sexual violence. United Nations agencies in Iraq reported that Turkmen, Christian, and Shabak women were subject to sexual violence while in Islamic State captivity. Human Rights Watch also reported that Islamic State fighters arbitrarily detained, tortured, and forcibly married Sunni Arab women. Providing reparations to one ethnic or religious group while excluding others may exacerbate sectarian and inter-community tensions and deter reconciliation efforts under already sensitive security conditions.

One further recommendation to improve the draft bill would be the addition of privacy and confidentiality protections in all aspects of the reparations program. Without these protections, victims and survivors may be unwilling to participate, fearing for their safety or that of family members or social stigma. Past efforts at combatting violence against women, for example, have been unsuccessful in protecting victims and their families from these risks.

Reparations that give victims and their families a role in creating social change can be transformative, countering structural inequalities in society.

Iraq does not have domestic legislation criminalizing war crimes, crimes against humanity, or genocide. Instead, it has relied on counterterrorism laws to prosecute suspected members of the Islamic State. Though not frequently applied by courts, Islamic State members may be entitled to release under a 2016 general amnesty law under certain circumstances. The Center therefore recommends that Iraq include a provision within the draft bill clarifying that no statute of limitations should apply to atrocity crimes (including acts of sexual violence when they constitute genocide, crimes against humanity, or war crimes) and that amnesties should not be applied to perpetrators of sexual violence crimes.

For reparations to be truly effective, the Iraqi government must employ a holistic approach to protecting vulnerable populations, and the challenges of doing so have been made clear through past challenges in addressing domestic violence, which is on the rise globally as the result of the COVID-19 crisis. However, Iraqi law does not address domestic violence, and the criminal code provides defenses and mitigated sentences in domestic violence situations. The Center has provided key recommendations to the pending Protection from Domestic Violence Bill. Fear of increasing domestic violence during Iraq’s coronavirus lockdown has made it clear that the government must act to pass the bill.

Moreover, policy ambiguity makes it unclear as to whether Iraqi-registered NGOs can even provide shelter to victims, and the Iraqi government continues to criminalize shelters for those escaping gender-based and domestic violence. The Organization of Women’s Freedom in Iraq (OWFI) has been accused by the General Secretariat of the Iraqi Council of Ministers of illegally sheltering women fleeing domestic violence. The ongoing criminalization of shelters that provide life-saving services puts women and girls at even greater risk of domestic violence, torture, or death amid the pandemic.

Adoption of both bills and undertaking a comprehensive review of sexual violence provisions in Iraq’s criminal code would help protect women and children from future violence, but more remains to be done. Accountability for past crimes is also needed to alter the prevailing climate of impunity. To do so, atrocity crimes should be expressly penalized in Iraq’s criminal code, along with other procedural changes to ensure accountability for atrocity crimes. Consultations with Yazidi victims for example show that for many, justice (including criminal accountability) is a top priority, but the lack of a legal framework and failure to prosecute sexual violence crimes as such demonstrates the need for significant structural changes.

The draft law, if approved by Parliament, would be a significant step in establishing a comprehensive record of the crimes committed during the conflict that can allow affected communities to heal and rehabilitate. Involving communities of victims and survivors in the process will help to ensure that the reparation program meets their unique and most urgent needs while also building toward larger goals of truth, reconciliation, justice, and accountability. Establishing a truly comprehensive and transformative reparations program will be difficult, but it is an important investment in the long-term stability of Iraq

Kristin J. Smith directs the Atrocity Crimes Initiative, a joint ABA Criminal Justice Section and Center for Human Rights initiative focused on atrocity prevention, response and accountability. Prior to the ABA, she worked on issues of gender equality, reproductive rights and justice for sexual and gender-based crimes at the Global Justice Center in New York. She tweets from @kristinjpsmith.