American Indians are actively resisting Trump’s efforts and working to achieve their civil and human rights, even as US federal and state governments work to erode them. 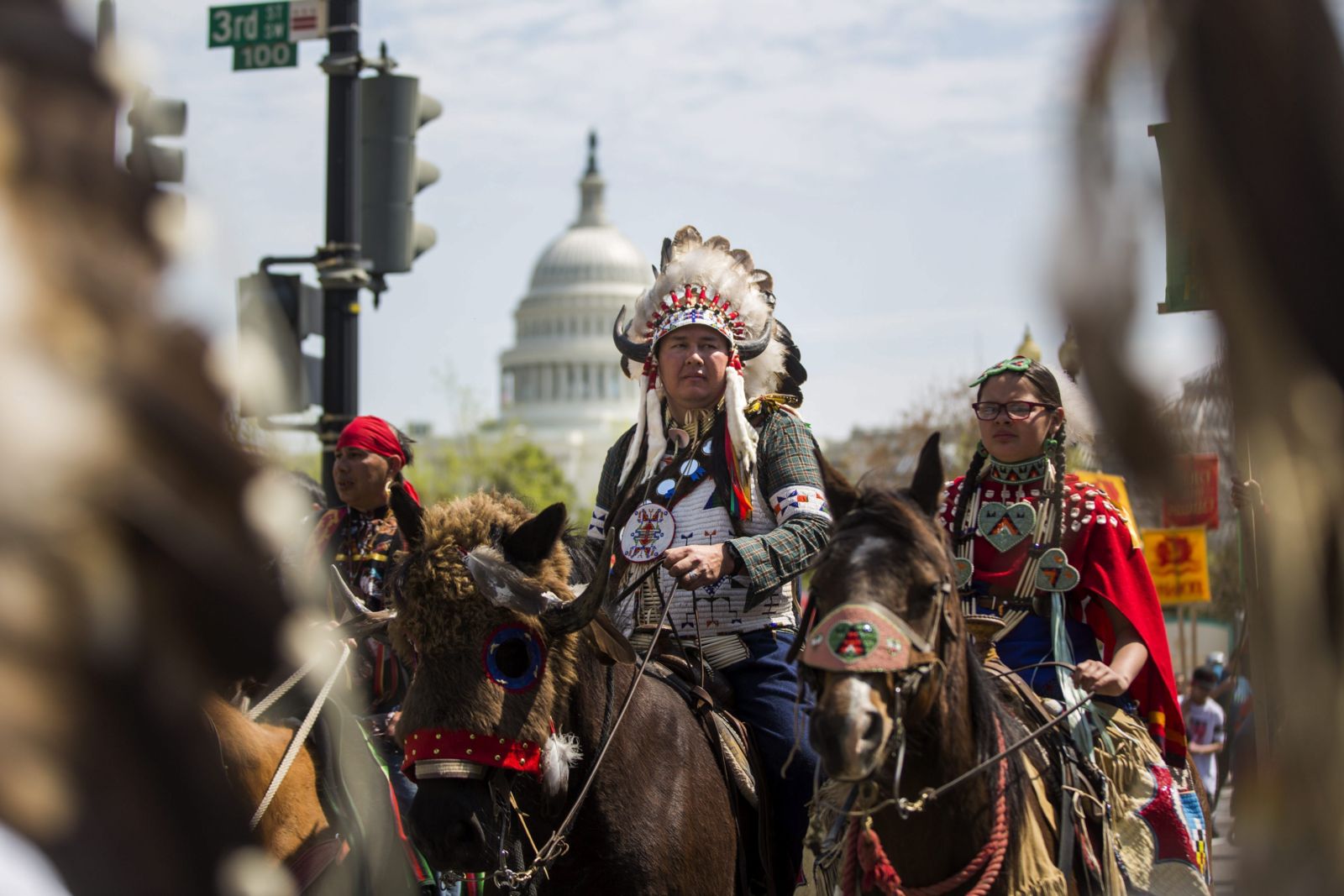 Leaders of the Cowboy Indian Alliance during a demonstration they made on horseback against the extension of the Keystone XL pipeline in April 2014.

In the current political climate, there is more danger than ever before that the mainstream press will ignore the experiences and rights of indigenous peoples. The common perception in the US has long been that American Indians became extinct in the nineteenth century or persist only in the tragic figure of the drunken Indian, the stereotype of the noble savage, or the overstated distortion of the rich casino Indian. The lived experiences of the roughly five and a half million American Indians and Alaska Natives (as counted by the 2014 American Community Survey) are rarely represented in popular media, and pressing human rights issues experienced by these communities are rarely covered.

This lacuna of representation vastly predated Donald Trump’s 2017 ascent to the presidency and stands to grow larger still as news outlets struggle to keep up with the almost daily scandals and shock-inducing tweets coming out of the White House, while attempting to carve out space for other newsworthy events. But the human rights community has an ethical and treaty-based responsibility to advance the rights of indigenous peoples, formalized further still through the US adoption of the United Nations Declaration on the Rights of Indigenous Peoples in 2009. Also, it is essential to delineate the ways the Trump administration—just over one year into its tenure—has targeted American Indians for exploitation and further deterioration of their human rights. Indeed, Trump’s targeting of American Indian rights as president is just the latest in a larger pattern of anti-Indian bias he has exhibited throughout his life.

Trump pointedly made his authorization of the Dakota Access Pipeline one of his first official acts as president (January 24, 2017)—an act that disproportionately exposes American Indians to health risks in the case of an oil spill along the 1,100 mile pipeline that runs from North Dakota to Illinois, and which violates the 1851 Treaty of Fort Laramie by extending through territory allocated to Sioux Tribes. As ethnobotanist and activist Linda Black Elk (Catawba Nation) has meticulously detailed, the pipeline runs through multiple sacred sites and erodes their rights to health and food sovereignty by disrupting the plant-life in the region. Though not widely known, oil pipelines actually leak quite often, and the primarily white population of Bismark, North Dakota were concerned enough about the integrity of their drinking water that they rejected the pipeline crossing through their region.

Trump has further signaled his disregard for indigenous health and land rights through a number of initiatives, including his proposed 2017 budget (stripping $300 million from the US Department of the Interior’s Indian Affairs, which addresses education, law enforcement, human services, and housing programs), as well as his efforts to privatize federal trust lands and make American Indian-held lands more accessible for “development” and extraction, as with his recent contraction of  Bears Ears National Monument. Moreover, his proposed border wall would violate the sovereignty of the Tohono O’odham Nation by bisecting its territory and peoples, which straddle sixty-two miles of the US-Mexican border.

One might interpret all of these efforts merely as “pro-business” rather than as pointed efforts to erode American Indian rights were it not for Trump’s (1) history of anti-Indian bias, (2) hostile conceptions of American Indian identity, and (3) his apparent ignorance of American Indian treaty-rights. Publicizing these actions and using them for human rights advocacy is critical to make progress against the increased enmity against indigenous rights. Taking each point in turn:

(1) Trump spent nearly $1 million dollars in 2000 to contribute to a racist campaign against the St. Regis Mohawks after they announced plans to open a casino. These ads argued that a tribal casino would bring drug trafficking, violence, and organized crime to the region.

(2) In his 1993 testimony before Congress, Trump argued that members of Connecticut tribes do not look like American Indians and therefore should be ineligible to open casinos (that would compete with his own) under the provisions of the Indian Gaming Regulatory Act of 1988. He thus identifies himself as an appropriate judge of American Indian identity and rights. Certainly these are instances of Trump aiming to advance business interests, notably his own, but his pointed attacks on American Indian peoples betray a more insidious racism that he leverages for his own profit.

He again mixed racism and opportunism in his repeated deployment of “Pocahontas” as a slur against Senator Elizabeth Warren. Not only was he making an unqualified judgement on American Indian identity, he went a step further by turning the name of one of the most famous and misrepresented American Indian women into a political weapon. Although Warren’s claims to Cherokee ancestry have not been verified, Trump seems less concerned about a fraudulent identity claim than about bolstering his own political power by using the label “Pocahontas” to belittle Warren.

(3) Trump’s ignorance about American Indian treaty rights have dangerous implications, as indicated in a signing statement for an appropriations bill in May 2017 in which he apparently regards block housing grants for American Indians as unconstitutional. Here he falls prey to a common category mistake by seemingly regarding American Indians as one of several interchangeable US minority groups, rather than as members of nations to whom the US government has forged a series of treaty obligations in exchange for their forcibly ceded lands.

Human rights activists could—and should—use these incidences to empower advocacy campaigns. Although Trump’s presidency is unprecedented in many ways, the targeting of American Indian rights by the US government most certainly is not. The NoDAPL protests began prior to the Trump administration, and indigenous activism more generally has not stopped since colonization began. It is important not just to be aware of infringements on American Indian rights, but also for non-Native peoples to partner with American Indians in this effort.

Most famously, indigenous resistance against Trump has taken form in the protests against the Dakota Access Pipeline (NoDAPL) but it also continues in ways rarely documented in the mainstream press, including lawsuits against the Trump administration’s shrinking of Bears Ears National Monument, and Linda Black Elk and Dallas Goldtooth’s (Mdewakanton Dakota and Dine, Indigenous Environmental Network) use of social media as alternative means of raising awareness and achieving political changes.

Although the outcome of many of these efforts remains to be seen, their success can be measured in part by the attention activists have been able to bring to issues of environmental justice in Native America (at a time when indigenous peoples are largely erased from mainstream view) and through the trans-tribal and transnational coalitions that have formed in the last few years to collaborate in resisting erosions of indigenous rights. No doubt the Trump administration will continue to attack indigenous rights and sovereignty, but it also is certain that indigenous peoples will continue to resist with tools both old and new, as they have done since first contact with Europeans.

The human rights community more broadly can aid the efforts of indigenous activists in a variety of ways, including by bringing awareness of these efforts to the general public, helping to fund tribal legal battles, and using channels like the United Nations and the Inter-American Commission on Human Rights to see that the provisions of the Declaration on the Rights of Indigenous Peoples are realized.

Tereza M. Szeghi is an associate professor in English at the University of Dayton.