Partnering with a comedienne and taking to social media, Human Rights Watch is getting creative to gain traction on women’s rights in Morocco.

To get anyone’s attention in this world of information overload and 24-hour news cycles, sometimes you need to get a little dramatic. Indeed, human rights organizations are finding that highly visual (and often shocking) campaigns are more likely to get the public’s attention than more conventional efforts. And this is exactly what Human Rights Watch recently did to shine a spotlight on the issue of violence against women—and specifically domestic violence—in Morocco.

In this HRW video, Moroccan comedian and feminist activist Mounia Magueri plays the role of a domestic violence survivor, an abusive husband, a police officer, and a prosecutor and highlights the problem of domestic violence from different angles.

In 2009-10 a national survey found that 62.8% of women aged 18 to 65 had experienced some form of physical, psychological, sexual or economic violence. Because Morocco is a highly devout country, the debate amongst human rights elites on women’s rights has often been highly polarized, pitting religious against secular, even though polls suggest that among ordinary people the issue is far more nuanced. This is a promising sign, because as many rights activists know, getting public buy-in on a controversial issue is often all about the framing.

Compounding the problem is the fact that the Moroccan government has become increasingly hostile to CSOs and especially to major human rights organizations, both domestic and international. In fact, according to Rothna Begum, the author of Human Rights Watch’s most recent report on violence against women in Morocco, the government has recently stated that they do not want her organization to conduct research in the country at all. She states that the government’s recent responses indicate an overall strategy of cutting off anyone who is critical of their actions or policies, citing the government’s recent suspension of contact with the European Union over the disputed territory of Western Sahara as just one recent example.

Begum notes that the new draft law—accepted on March 17 and now going to parliament—is still highly problematic as, among other issues, it lacks a definition of domestic violence and has made it very difficult for women to get emergency protection orders (e.g., restraining orders) unless they pursue a criminal prosecution, or their abuser is convicted. Women often choose to drop criminal cases for a whole host of reasons, including pressure from families, and a conviction on domestic violence is rare. International standards state that emergency protection orders should not be linked to pursuing a criminal prosecution or a divorce.

Indeed, domestic violence in particular is full of cultural complexities and debates around the public and private realms. This has necessitated creative approaches to spark dialogue and encourage change. One such approach is a recent collaboration with activist and comedienne, Mounia Magueri, who created a video on violence against women in Morocco after HRW approached her on the issue. 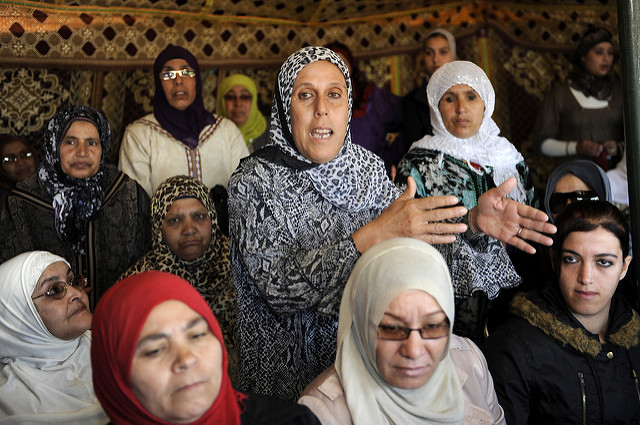 A 2009-10 national survey found that 62.8% of Moroccan women aged 18 to 65 had experienced some form of physical, psychological, sexual or economic violence.

“We saw her videos … and she had kind of a feminist monologue. She had over a million views, and she spoke very true of what was happening in Morocco… so we approached her to do a sketch on domestic violence,” Begum says. The result? Over 30,000 views (combining the Arabic, French and English versions) and 12 separate articles in the Moroccan press. In the three weeks leading up to International Women’s Day, the Arabic hashtag الحقاوي_عطيني_حقي# (“Hakkaoui: Give me my rights”) was directed at the Moroccan Minister of Women and Family, Bassima Hakkaoui, and attached to different cases released by Human Rights Watch. “It’s not [just] an issue of why domestic violence is bad,” Begum noted. “But actually how the authorities are failing to address the problem.”

Keeping pressure on the government with letters, tweets, videos and witness stories, the Moroccan media began to consistently cover their efforts. Because HRW was writing about (and to) the ministers, the media was going directly to those ministers to get their reactions. This helped reveal comments and attitudes of the ministers responsible for drafting the violence against women law. One of the revelations was that the justice minister, Mustafa Ramid, said he sees domestic violence—and marital rape in particular—as too private to be adjudicated in a public setting. However, at least in part due to the heightened social media pressure, the government announced that they would discuss the draft law on March 17, where it was then adopted.

“We don’t think it’s as good as it could be,” says Begum. “There are major gaps: it doesn’t set out the responsibilities [for police, prosecutors and judges] such as requiring the police to take reports of domestic violence, conduct follow-up investigation, and even enter homes.  Often the police send women away when they report to them and they do not feel like they have authority to go into homes. That’s a serious issue.”

Nonetheless, the creative use of social media does seems to have had an impact, and Begum points to work being done in Lebanon as further evidence of film, photography and social media to get government attention on rights. In particular, a recent video featuring a 12-year-old bride with a man old enough to be her grandfather went viral, inspiring international outrage and garnering much needed attention on this particular issue. You can see in the video that passersby get quite upset at what they are seeing, and it is these types of campaigns that bring issues to life and make people literally “see” the problem. The trick, of course, is keeping this attention sustained in order to put enough pressure on governments to enact real change.

“There is still lots to be done in terms of creative usage,” Begum says hopefully. “The revised law as it currently stands won’t do a huge amount for women…. What we want is real change, and that means a strong domestic violence law.”

Rachel Schmidt is a writer and editor based in Ottawa. She holds an MA from the Norman Paterson School in International Affairs, and she specializes in children affected by armed conflict. She is an Associate Editor for openGlobalRights.