If the human rights community wants to maintain relevance and credibility, it needs to introspect. 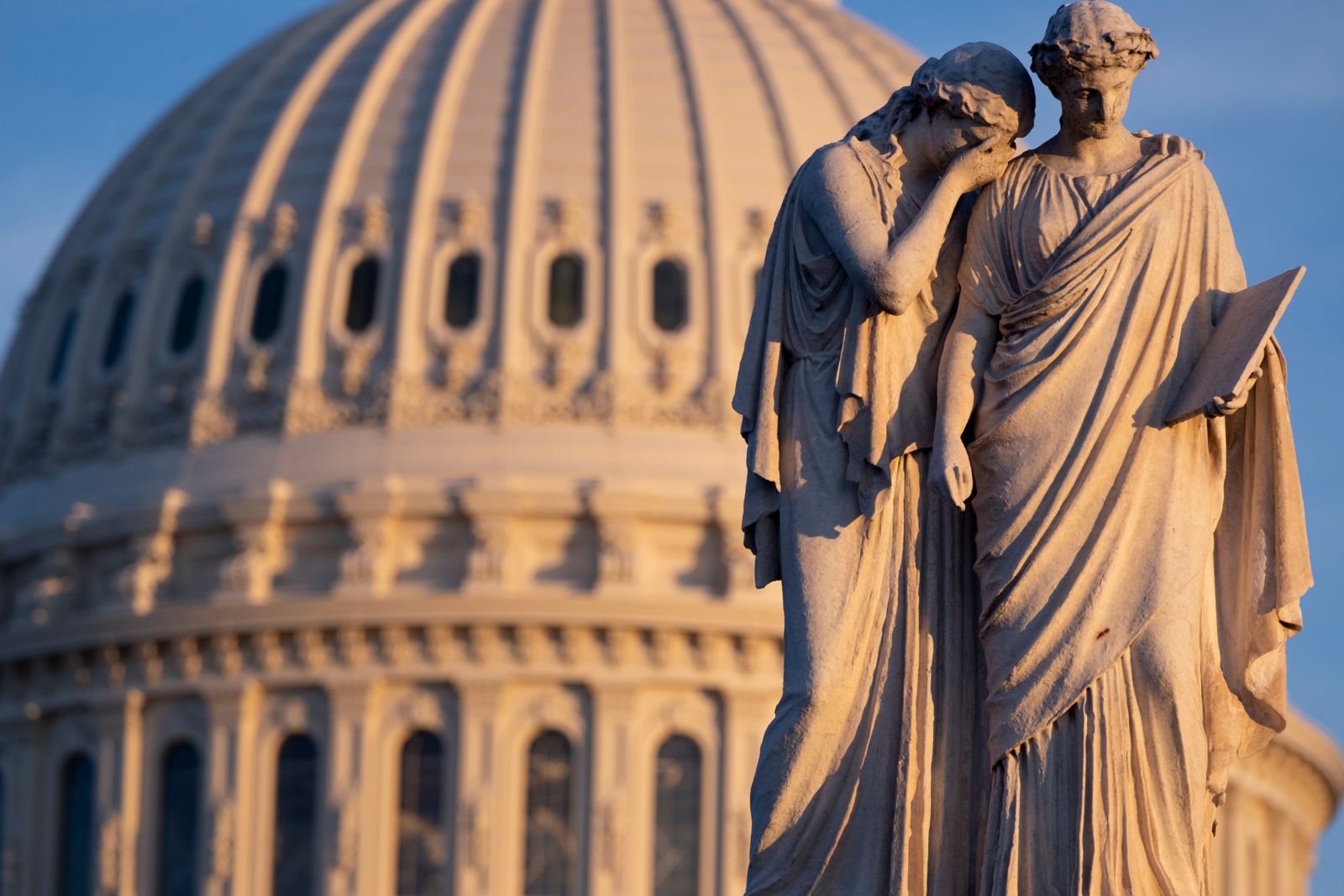 'The Peace Monument' is seen at the West Front of the US Capitol the day after Trump supporters stormed the US Capitol on 07 January 2021. Despite efforts by the mob to stop it, Congress certified Joe Biden's presidential election victory over US President Donald J. Trump. EFE/EPA/MICHAEL REYNOLDS

Trump’s defeat is good news for human rights, in the U.S. and beyond. After a heightened focus on authoritarian populism, the human rights community now sees a chapter closing. Yet, despite the relief we felt last November, it would be a mistake not to engage in self-reflection now.

But are we ready to collectively look at our own biases, mistakes, and self-defeating impulses? It is time we face the truth: we are losing our ability to convey messages about justice, equality, and human dignity. If we want to remain relevant and if we want more people to listen to us again, then we need to introspect. We have a unique opportunity to look at the world as it is and to fix our own failings.

Our first failing is empirical. We often fail to process facts because of cognitive biases, ideological preconceptions, and Manichean categorizations. Trump’s election was not unpredictable. I am not reinventing the wheel by making this assertion. Yet, many made the same mistake in 2020 (“How come so many people voted for Trump?!!” they wondered) as in 2016.

We must drop simplistic explanations (“He’s all about white supremacy”) and look at the facts. In 2020, Trump secured a larger share of virtually all minorities’ vote (while losing support among white men). Social determinants of voting decisions are important, but they are not an absolute science. Human beings have agency. The November 2020 results should be a wake-up call.

If we want to remain relevant and if we want more people to listen to us again, then we need to introspect.

Let us not assume that the elimination of voter suppression and gerrymandering will fix everything. Trump was smart at capturing different types of fears and angers. Denouncing the dishonest uses of “political correctness” should not be an excuse for dishonestly criticizing those who question the excesses of political correctness. Like it or not, Trump objectively captured anger at what many people regard as political correctness.

We should also listen to those warning us against the dangers of race-reductive analyses of inequality. If one thinks that everyone is either “privileged or powerless, white or of color, racist or anti-racist, oppressor or oppressed,” then one runs the risk of ending up being “surprised by the world as it is.” Social reality is complex.

An obsession with justice and outcomes (racial, social, etc.) should not trump reason. “It doesn’t fit with what I think, therefore it must be wrong” is close to the ideological blindness of Trump supporters. We must re-legitimize process, thoughtful deliberation, and self-doubt.

We must also re-legitimize empirical rationality. An over-focus on subjective experience and emotions is as dangerous as Trump-sponsored disinformation.

Our second failing is emotional and moral. Do not get me wrong: emotions and empathy are strong driving forces of human rights work. But human rights activists’ claim of unquestionably occupying the moral high ground can lead to a number of mistakes: Manichaeism, overgeneralizing, catastrophizing, emotional reasoning, and broader cognitive biases associated with a failure to rationally engage opposing viewpoints.

During the Trump era, the human rights community was in a constant state of outrage (I occasionally fell into this trap reading Trump’s tweets). Our moral certitudes led to lack of nuance, moral condescension, and demonization of opponents. These certitudes also led many of us to lose our sense of humor and turn into a myriad of Jorge de Burgoses (in Umberto Eco’s The Name of the Rose, Jorge de Burgos is a monk who demonizes laughter as being blasphemous).

From time to time, we should take a step back—and take ourselves less seriously. Laughter is good for our emotional well-being; it is also one of the most powerful weapons against fear and injustice.

Let us not assume that the elimination of voter suppression and gerrymandering will fix everything.

No doubt, many of the policies Trump and his enablers supported are cruel and abusive. No doubt, we are right to oppose them. Yet our reaction often goes beyond combatting policies; we often demonize any person holding or supporting views we deem incompatible with human rights. This is harmful to rational debate, objectivity, and intellectual curiosity. Social media reinforces this process of “collapse of our capacity to disagree constructively.”

Now, Trump displays an extreme form of pathological narcissism, and one may rightly call him a fascist sociopath. Some of his supporters are violent white supremacists. But 74 million people voted for him, and they are not all fascist sociopaths. They can make bad decisions. They are fallible—as we all are. Human beings are complex.

Most people are not awful, irredeemable oppressors. Most people do not deserve to be “cancelled.” (Yes, some use the term in a dishonest way but “cancel culture” does exist and sometimes targets minor slips and legitimate opinions.) As members of the human rights community, we should engage adverse viewpoints and criticize ideas and policies, not assume people’s immorality and launch ad hominem attacks.

There is no such thing as moral purity. Those who are confident they hold the truth and want to purify the world usually end up turning it into hell—as in Philip Roth’s The Human Stain. If we do not conduct this introspection, then we will turn into puritans and illiberals.

Our third failing is strategic. Seeking to erase the voice of people who think differently is not just an empirical and moral mistake; it is counterproductive. We should stop calling anyone who disagrees (even if they acquiesce in human rights violations; even if they voted for Trump) “fascists.” Calling a white factory worker who fears for his job “privileged” (just because he is white) is a strategic mistake. Calling voters we disagree with “deplorable” is a strategic mistake.

We should uphold open debate. “I’m-offended-therefore-I’m-right-therefore-you’re-an-oppressor-therefore-I-cancel-you” and similar uses of victimhood will lead us nowhere. We should end this never-ending process of indignation and foster thoughtful deliberation and rational debate—including within the human rights community.

Unfortunately, many continue to make that mistake. Consider the way President Obama was criticized for suggesting that “Defund the Police” was a counterproductive slogan. Consider how those opposing the impulse for “wiping the slate clean” are treated. Consider how careers are destroyed and people crushed not for intentionally using insensitive language to harm other people, but for minor slips, clumsy wording, or even euphemisms.

A constant state of outrage is not only harmful for psychological health (as people shield themselves from words and ideas that make some uncomfortable and end up being trapped in bubbles); it is self-defeating. In the long-term, if everything is outrageous, then nothing is outrageous.

Let us get rid of the constant outrage and indignation that social media has led us to. It provides short-term comfort—the kind of comfort that comes with a sense of belonging and “the delicious feeling of having it all figured out”—but it makes open debate increasingly difficult.

Human rights are not about holding absolute truths, over-simplifying social and racial issues, enforcing intellectual conformity, self-isolating in ideological bubbles and groupthink, and using emotions to shut down debate. We should stop assuming we know everything about other people based on what they say or who they vote for. We should stop erasing individuality and agency.

Instead, we must look at the world as it is—not as we wish it were. In the long term, there is no other path for the human rights community. In the short term, self-reflection is vital to fix our empirical, moral, and strategic failings.