The promised report of a UN investigation into war crimes in Sri Lanka will achieve little unless accompanied by real introspection by both Tamil and Sinhala communities.

Sri Lanka’s civil war ended in May 2009. For years, the lack of accountability for the grave human rights abuses committed during the last phase of the war has seemed for many actors to be the sole issue of concern. Powerful states, international human rights organizations, vocal sections of the Tamil diaspora, alongside some NGOs and courageous activists in the country, brought increasing international pressure to bear on the authoritarian Rajapaksa regime. This culminated in March 2014 when the UN Human Rights Council (UNHRC) established an investigation into the violations during the war.

The UN report is likely to be released in September. In January 2015, a wide spectrum of Sri Lankan society democratically overthrew the Rajapaksa regime, electing a new government under President Maithripala Sirisena. It is uncertain how it will respond to the UN report and whether it will pursue accountability. What is certain is that the international effort for accountability and the national debate about it have both been deeply politicized. The UN report itself may do little to promote the introspection by both Tamil and Sinhala communities that is so urgently needed to achieve genuine reconciliation.

Geopolitical reasons, particularly the proximity of the Rajapaksa regime to China, led the United States to sponsor the UNHRC resolution against Sri Lanka. The report it called for was to have been published in March 2015. But when President Sirisena was elected, interventions by powerful western states and India led the UN to delay publication, giving the new government a chance to pursue its own investigations. However, Tamil nationalist sections both in Sri Lanka and in the diaspora vehemently protested even this modest delay.

For the survivors, accounting for the war affected, for the dead and the disappeared, is necessary. But their calls for truth and for engagement with the UN investigation are mediated by nationalist politics and by the interests and agendas of the international human rights community. Such politicisation and internationalization of the lives of the survivors disregards their socio-economic suffering that continues after the war; or it attempts to equate this suffering solely to attacks by the state. 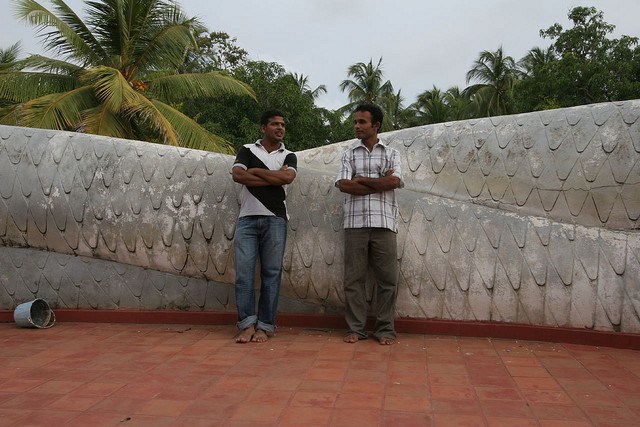 A Tamil man converses with a Sinhalese man.

Indeed, accountability is linked to memory, to the past and also to the future. It requires collective introspection on the part of communities. It is precisely such introspection that is lacking in Lankan society, particularly among the nationalists in the Sinhala Buddhist and Tamil communities. Their nationalist propaganda, alongside western portrayals of Sri Lanka as a place only of ethnic conflict, and where only war crimes and accountability appear to matter, debilitates processes of truth-seeking and polarises communities.

An earlier report by a panel mandated by the UN Secretary-General in March 2011 alleged that in the last months of the war the Liberation Tigers of Tamil Eelam (LTTE) held thousands of Tamil civilians as hostages, forcibly recruited youth and children, and killed many who attempted to escape. Public reflection by Tamils on these LTTE atrocities is necessary to chart an alternative political path for the future; and to change the Sinhala community’s views on the genuine grievances of minorities as distinct from the LTTE’s politics. The LTTE’s brutal attacks against Sinhalese and Muslims during the civil war need to be acknowledged by the Tamil community, no less than the Sinhala community needs to recognise the brutality of the state which led to the alienation felt by many Tamils. Unfortunately, Tamil nationalists avoid such reflection, and attack or attempt to isolate Tamils critical of the LTTE; this further stifles critical thinking.

In southern Sri Lanka, Sinhala-Buddhist nationalists use anti-imperialism as a convenient cover to avoid examining the abuses of the State; including the many massacres, indiscriminate attacks on civilians, and the torturing and disappearing of thousands, which are etched in the minds and bodies of the Tamil survivors of the war. While it is true that the interests of powerful western states and other emerging powerful states shape the agendas of supranational organizations like the United Nations, political engagement in Sri Lanka cannot be in opposition to imperialism alone. The struggle is at many levels including vigilance against imperialism, challenging the majoritarian national security state and so-called “liberation movements,” all of which undermine the rights and aspirations of the people.

A local human rights group, the University Teachers for Human Rights (Jaffna) consistently throughout the war recorded the abuses by all actors, the Sri Lankan state, the LTTE and the other armed groups. While it exposed some of the worst human rights abuses, UTHR(J) also saw its role as opening the space for dissent and introspection among Tamils. Similarly, future human rights initiatives, whether they are local or international, should recognize that it is only when communities mutually engage through self-criticism that processes of accountability can lead to their co-existence.

In Sri Lanka, addressing the historic grievances of minorities and the legacy of the long civil war and its aftermath are mammoth tasks. The oppression of women, the social exclusion of oppressed castes, the exploitation of the rural and urban under-classes – all must be addressed. All citizens of Sri Lanka, not just those in the north and east who survived the war, will benefit from the reform of a militarised and centralised state, the democratisation of an authoritarian political culture and an end to the dispossession of marginalised peoples. Discussions on the political future of Sri Lanka, which often reduce the national question to a Sinhala-Tamil ethnic conflict, should recognize the history of exploitation faced by the up-country Tamils (who came as colonial indentured labor from India). It should address too the mass violence that the Sri Lankan Muslim community suffered at the hands of both Sinhala-Buddhist and Tamil nationalist forces.

The UN investigation and report can polarize as much as reconcile. It is the work of progressive local actors willing to take a resolute stand including by challenging the state, chauvinistic forces within their own communities and powerful international interests, which will ultimately determine the UN report’s lasting impact.

Mahendran Thiruvarangan is a researcher from Jaffna and member of the Collective for Economic Democratisation in Sri Lanka.