Discrimination in action: the value of experiments in human rights

A video game experiment in Slovenia reveals discriminatory practices against the Roma—what else might experiments teach us about human rights?

Although many rights advocates might be wary of experiments, this form of inquiry can offer valuable insights to our understanding of human rights. Take, for example, the common strategy of discrediting reports of discrimination by saying that the disparate treatment was justified. Many widely held prejudices—such as women not being suitable for the hard sciences, or black American men being “predisposed” to criminality, or the Roma all being cheaters and thieves—are frequently used to justify discrimination. And as ludicrous as these claims are, demonstrating that such treatment is not justified can be quite challenging.

In the case of the Roma, quantitative data that might reveal discrimination are either not collected or not available to human rights researchers.

In the case of the Roma, for example, quantitative data that might reveal discrimination are either not collected or not available to human rights researchers. Asking non-Roma people directly whether they discriminate against the Roma likely won’t yield accurate results; direct questions after all, get at what people say they do, rather than what they actually do. Asking Roma to report discrimination is similarly problematic. Such questions might be upsetting, or people might not want to report discrimination because they fear reprisals. Others might be embarrassed, or perhaps some are so used to disparate treatment that they don’t recognize discrimination for what it is. 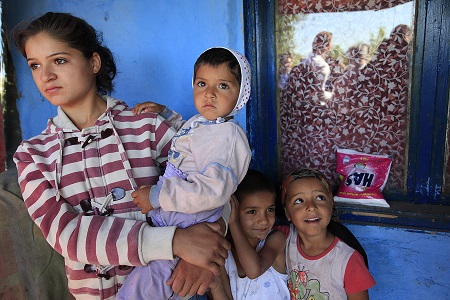 Among some non-Roma in Europe, discussions on cooperation for sustaining public goods often label the Roma as cheaters and thieves.

How, then, do we capture discrimination? I have been using video game experiments to try and study such behavior. I began by examining a basic building block of a thriving community: cooperation. When members of a community cooperate, life is better for everyone. With public goods such as clean air, national public radio, or a neighborhood watch, everyone can benefit, regardless of whether they help sustain them. If, however,  no one contributes to keeping them up, the goods will eventually peter out.

Among some non-Roma in Europe, discussions on cooperation for sustaining public goods often label the Roma as cheaters and thieves. The Roma have been stereotyped as such for centuries, and regardless of how individual Roma behave or have behaved in the past, the stereotype persists. While non-Roma view other non-Roma as good citizens who cooperate to help sustain public goods, they view Roma as takers, or free riders who benefit from the good without contributing to its upkeep. As a result, some non-Roma are less interested in contributing to a public good when Roma stand to benefit from it. Often, they do not seem to consider such behavior as discrimination, because they think that the Roma deserve disparate treatment. That is, if you don’t trust a cheater you’re not discriminating—you are merely avoiding being cheated. This intractable viewpoint is profoundly damaging as it not only contributes to the negative reputation of an entire minority but it also excuses abuse. This is the notion I put to a test.

Last year, I found that Roma people were less likely to contribute to the public good if they had experienced discrimination. I then wanted to test the opposite: is it true that Roma behavior is the cause of discrimination against the Roma?

To find an answer, I constructed an experiment that simulates a public goods scenario like those described above. In the game, a participant and seven other simulated players (avatars) build a tower. They do this over 12 rounds. The more people help build the tower, the better off everyone is. Since everyone benefits from the rising tower, regardless of contributing, and since contributing is costly, the temptation to not contribute (and still benefit) is high. Contributing, however, makes all players better off.

Using these simulated avatar players allowed me to assign different identities and thus create a control and treatment group. In one version of the game, all of the avatars were members of the majority group. In a second version, half of them were members of the majority group and half were Roma. Everything else, including how those avatars behaved, was exactly the same.

To conduct the study, I recruited non-Roma participants from a Slovene town to play the videogame, and paid them a small honorarium; they knew it was a videogame and that the other players were simulated. I wanted to see how often they would contribute to the public good in the two scenarios.

If it is true that non-Roma do not discriminate, or, as popularly claimed, they only treat Roma differently because the Roma “cheat” or free ride, non-Roma behavior in this videogame should be the same in both scenarios. The avatars, after all, contributed identical amounts to the public good, which participants saw—the only thing about them that differed was their ethnic identity. Even if initial behaviors of non-Roma participants were informed by their expectations that the Roma would cheat, they had time to learn that this was not the case and could adjust their behavior. If, however, non-Roma gave the ethnic identity of the avatars more weight than they did to the information on how those avatars behaved, they might have still discriminated.

How did the non-Roma participants behave? In this medium-sized Slovene town, non-Roma widely discriminated against the Roma. When all avatars were non-Roma, a participant would on average contribute to the tower 78% of the time. When half of the avatars were Roma, s/he would contribute significantly less: on average, 59% of the time. There was no learning—even as participants had the opportunity to observe that the Roma avatars were contributing to the tower as much as non-Roma avatars did, they did not adjust their contributions. This, then, suggests that Roma behavior is not the cause of discrimination against the Roma. Instead, it seems that the Roma identity invites mistreatment.

The experimental set-up allowed me to capture non-Roma discriminating against the Roma under circumstances that left no room for doubt as to why. But how might these methods be used in other contexts? There are contentious debates about whether women are underrepresented in the hard sciences because of merit or some form of discrimination—scholars have used experimental methods to show that these disparities are not based on merit. Similarly, experiments have demonstrated that black men without a criminal history face discrimination strong enough to put their odds of getting a job equivalent to those of white men who had been in prison. Experiments have shown that a public broadcast of a soap opera raising awareness on violence against women can bolster rejection of such violence. Finally, experiments have also given insight into how to reduce human trafficking; for example, when individuals feel deprived relative to those who live around them, they can be more risk-seeking, putting themselves and their children at greater risk for exploitation. These problems are not easy for policymakers to solve. But experiments can help provide the tools to know where to start.

***Author’s note: A couple of months ago, Will Moore asked me to contribute this post. At the time, it seemed fitting to write about this particular project as I began working on it after a series of conversations I had with Will in 2013. To me, Will was a role model and I am grateful for every bit of advice he gave me. I cherished his honesty. I'm honored to contribute to this series, now dedicated to him. And I promise to pay it forward.