Bolsonaro's devastation policies in the Amazon region could prompt a new international paradigm of protection for human rights and the environment. 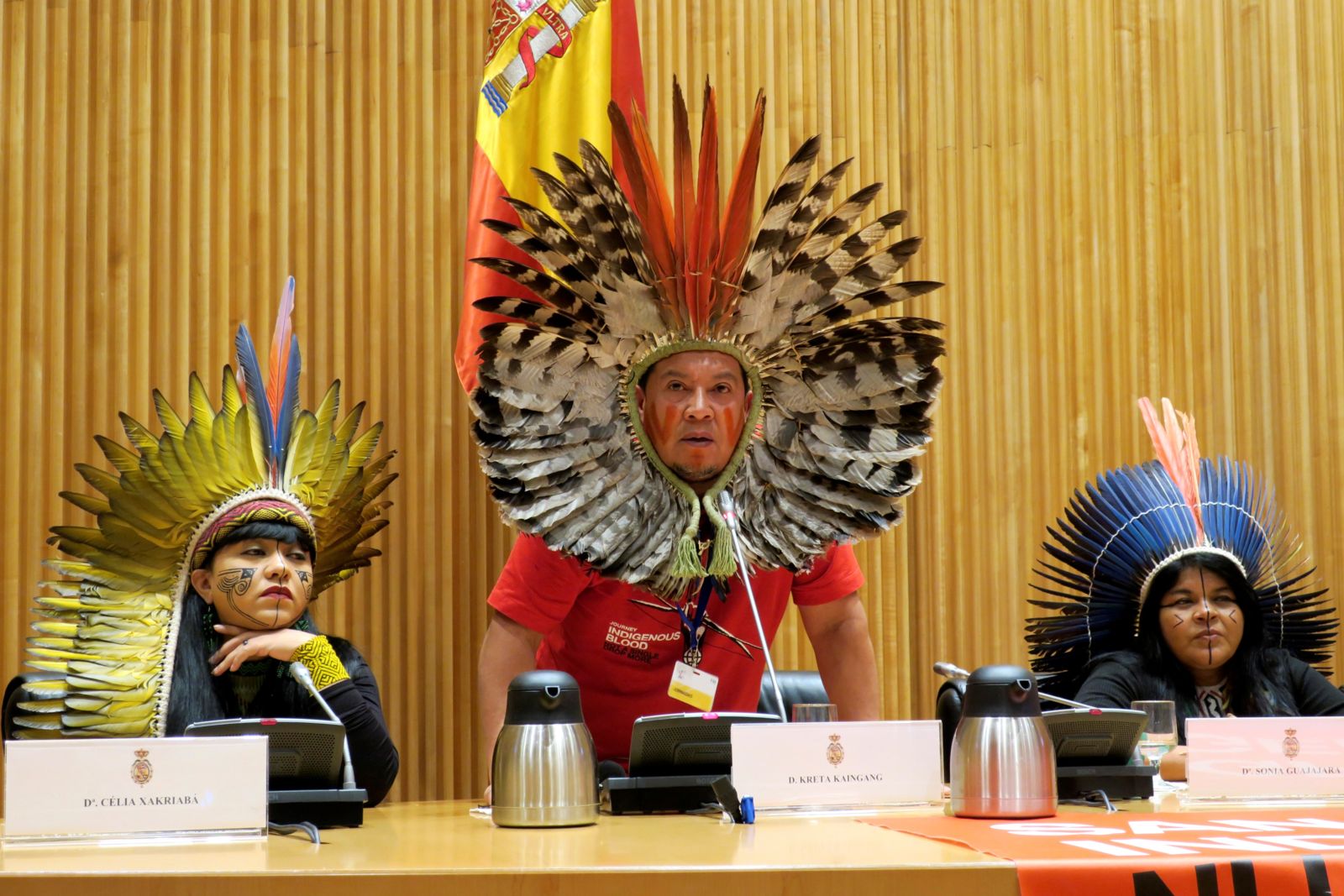 The teacher and activist from the Brazilian state of Minas Gerais, Celia Xakriabá (l), the activist Kreta Kaingang (C) and the first indigenous candidate for the vice-presidency of the Brazilian government, Sonia Guajajara (r) during a press conference in Spain, after a 2019 tour of the European Union, in which they described the president of Brazil, Jair Bolsonaro, as "directly responsible" for the increase in deforestation in the Amazon and for the murders of environmental defenders. EFE/Sofía Torres

Since Jair Bolsonaro took office as president in Brazil, he has been promoting a policy of destruction of the Amazon forest, as well as attacks on indigenous peoples, in order to supposedly boost development projects in protected areas. Faced with this scenario, a group of lawyers and human rights defenders are accusing the Brazilian president of crimes against humanity before the International Criminal Court (ICC). Will this be the paradigmatic case that will set a new course for the international protection of human rights and the environment?

From the very first day of his administration, Bolsonaro has implemented a series of measures to dismantle existing socio-environmental protection policies in the country, such as halting the Amazon Fund and the Climate Fund; revoking environmental fines already applied; dismissing and persecuting civil servants who disobey the “new guidelines;” and disregarding the existence of raging fires in the Amazon rainforest, the Pantanal and in other biomes, which in turn fueled them even more.

After two years, it is clear that Bolsonaro’s government has gone further and catalyzed an unprecedented, environmental and human rights crisis. Along with the growth of illegal mining and deforestation for the expansion of agribusiness, attacks by armed groups have been forcing indigenous peoples, socio-environmental rights defenders, and traditional peoples to either abandon their territories or face the violence encouraged by the Brazilian president's hate speeches.

The situation could have been even worse if a series of lawsuits had not been filed by Brazilian civil society actors, which prevented the implementation of part of the devastation policies promoted by Bolsonaro’s government and its environment minister Ricardo Salles. It is not disputed that the control of political action through lawsuits has its limitations, but the debate on possible crimes against humanity committed by Bolsonaro in the Amazon region has been growing strongly in Brazil and in the international community.

In this context, in November 2019, a group of Brazilian lawyers gathered in the Human Rights Lawyers Collective (CADHu for its acronym in Portuguese) and in the Arns Commission (a renowned human rights commission in Brazil), presented before the International Criminal Court (ICC), an informative report that demands that Bolsonaro be held personally responsible for the systematic and widespread attacks on the ecosystem and on the indigenous and traditional peoples of the Amazon region. According to the request, the president's set of measures, speeches, and omissions constitute crimes against humanity provided in the Rome Statute.

In the document sent to the Office of the Prosecutor of the ICC, thirty-three facts are listed showing that, on the pretext of generating development of the Amazon region, Bolsonaro's government turned the attacks on the indigenous population and on their lands into an intentional government policy which violates the rights of this population. The criminal intent can be attributed to the presidential statements, in  which Bolsonaro claims that indigenous peoples need to “be integrated into Brazilian society” and in the infrastructure, mining, logging and agribusiness projects in the Amazon rainforest region that are promoted by the federal government.

The legal arguments of the request are based on the framework that the acts committed by  Bolsonaro as the president of Brazil put the indigenous and native peoples of the Amazon at risk of genocide and forced displacement, in the face of a generalized and systematic state policy of the deinstitutionalization of Brazilian indigenous policies and the destruction of the living conditions and forms of existence of these peoples due to the pollution of rivers and the invasion of their lands by miners, loggers and land grabbers.

Since these acts are considered crimes against humanity perpetrated through the destruction of the environment, the case presented to the ICC by CADHu and the Arns Commission shall contribute to the debate on the construal of ecocide and its application at the international level.

Ecocide can be defined as the conduct of someone who intentionally promotes the destruction or extensive loss of the ecosystem of a territory and its biodiversity, preventing the use of water, soil, subsoil, or even the air of the region. The debate on ecocide dates back to the 1970s and, since then, has gained prominence in United Nations’ discussion forums in order to be considered a crime according to international standards.

Despite the fact that ecocide is yet to be considered an autonomous crime under international law, in 2016, the Office of the Prosecutor of the International Criminal Court, under the leadership of Ms. Fatou Bensouda, published a policy paper that recommends prioritizing and investigating cases involving environmental damage, the illegal exploitation of natural resources, and the illegal dispossession of land committed in the context of the crimes provided in the Rome Statute.

This opened a window of opportunity for cases such as Bolsonaro's in the Amazon region to be brought before the ICC, given that in just two years of his administration, the Amazon forest has suffered its record high deforestation.

However, more than the debate on the definition of ecocide, the international community will be able to judge whether the acts of the Brazilian president are causing the genocide of the indigenous and traditional peoples of the Amazon, either by the destruction of their ways of life that depend on the forest and  protected lands, or due to the support for their widespread killings.

Other requests for Bolsonaro's investigation for crimes against humanity were filed at the ICC, including regarding his attitudes of denial towards the COVID-19 pandemic, which have already resulted in the death of more than two hundred thousand people in Brazil. So far, only the case proposed by the CADHu and the Arns Commission has been admitted by the Office of the Prosecutor of the ICC for the preliminary investigation phase.

There is still no evidence that the progress of the investigations in the ICC will inhibit Bolsonaro's actions, however as time passes by, more evidence of criminal acts will be brought to the Court, converting this case into a potential paradigm of international protection of human rights and of the environment. Until then, Brazil will have to look for other alternatives to contain the devastation that is taking place in the Amazon region.

This is yet another case that reveals that current global mechanisms for the protection of the environment and human rights are not strong enough to contain the policies of environmental devastation and genocide, such as those currently promoted by the Bolsonaro government in Brazil. It also serves as an alert to other countries to review their institutions critically and assess whether in fact they would be able to contain authoritarian and criminal measures by democratically elected leaders, as in the Brazilian case.

Flavio Siqueira is a Brazilian human rights lawyer and a practitioner in public interest litigation. He has been litigating in different areas such as human rights, consumer rights, environment, climate and public finance.