By centering resistances on ​​identity, we might unknowingly reproduce the discourses that essentialize it. 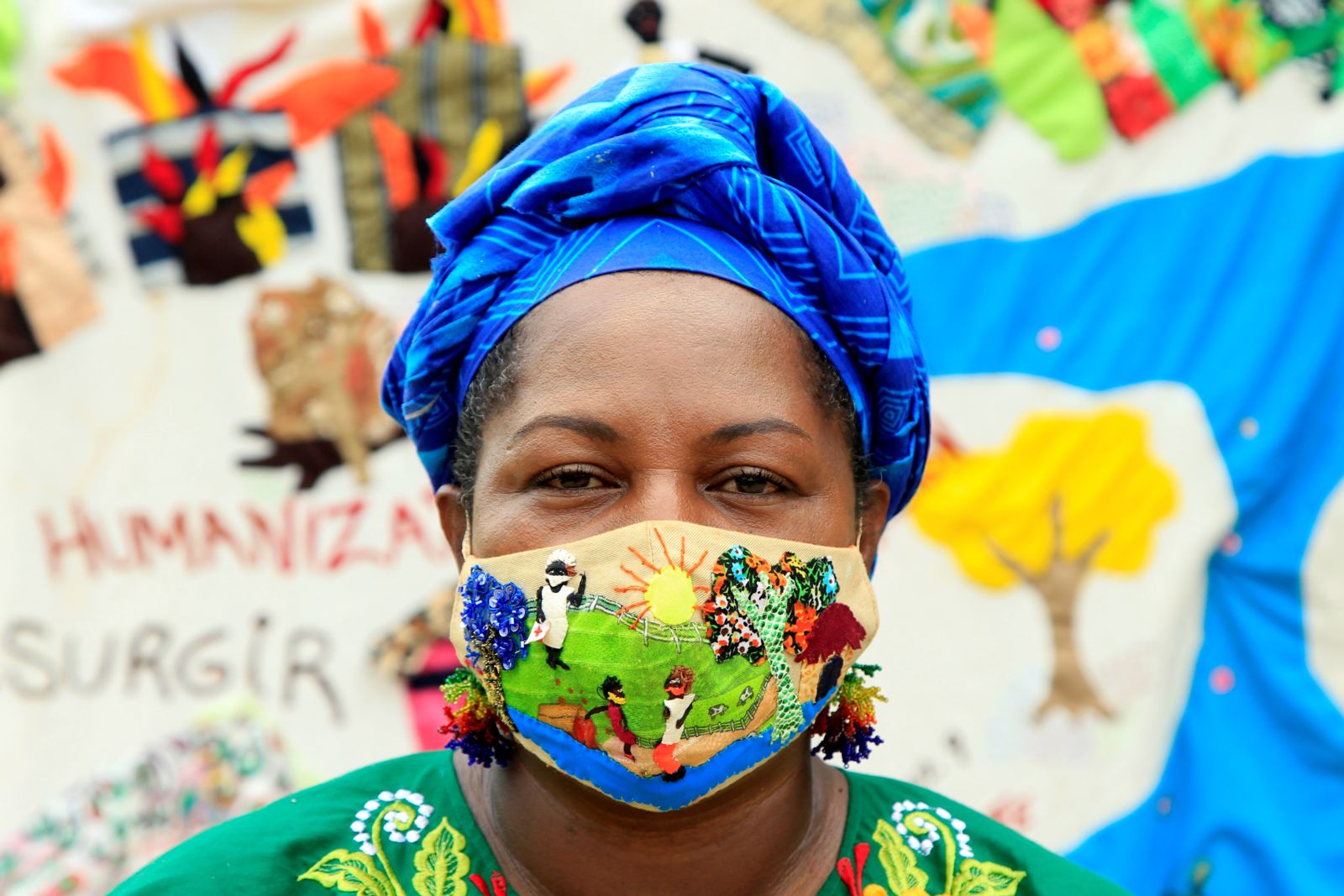 Photo from June 15, 2020 that shows Juana Ruiz, a human rights defender and leader of the Association of Women Weaving Dreams and Flavors of Mampuján, while wearing a mask made by the weavers, who in remote parts of Latin America embroider, paint or carve works that are a sample of their immense cultural diversity. EFE / Ricardo Maldonado Rozo [CHRONICLE ACCOMPANYING: LATIN AMERICA ARTESANOS]

My paternal grandparents migrated from the Middle East and North Africa to the Francophone Caribbean. My maternal grandparents were European immigrants in the Latin American Southern Cone. I lived half of my childhood breathing the thin, cold, dry air of a city sown on the cusp of the Andes mountains, and the other half of my childhood immersed in the warm aromas of tropical flowers and rain forest showers, in a beautiful valley of sweet rivers that bathe the Pacific.

Perhaps these mixed roots are why I feel alien within the discourses of identity and why it seems to me that I can see them from a kind of outside. As I see it, there is currently a broad agreement—across a spectrum of activists, academics, and organizations that defend human rights, promote equality, and work with marginalized communities—about the importance of situating identity as a central standpoint of the narratives of resistance and emancipation.

This is a normal and justified reaction, since the tremendous and tragic inequalities embedded in the legal and cultural codes of societies such as the one I live in—machista, classist, racist, heteronormative, and regionalist—are based on the production and reproduction of hegemonic collective imaginaries. These shared norms perpetuate prejudices anchored in the essentialization of identities, tacitly justifying the imposition of unfair differences and reinforcing hierarchies of power.

There is, though, a tension: by centering resistances on the idea of ​​identity, we might unknowingly be contributing to a reproduction of the discourses that essentialize it.

We must adopt, as societies that are slowly but steadily becoming aware of our historical crimes, abuses, privileges and mistakes, more and more robust affirmative actions and reparation measures to deal with our multiple, deplorable and prevalent structural injustices. These include, for example, the social, political and economic segregation of and violence against Afro-descendants, the extermination and dispossession of Indigenous peoples and peasants, and the mistreatment and discrimination of the poor, women, homosexuals and inhabitants of the marginalized provinces of a centralist state. But we must adopt those measures because they are oriented towards people, families and communities that, in many different ways, have been victims of injustices leveraged upon the social constructions of their “identity”. In doing so we are making the decision, as a more conscious society, not only of our historical responsibilities but also of our historical possibilities, of recognizing the shared humanity within our rich diversity.

As Amartya Sen recalls in his book Identity and Violence, “violence is promoted by the cultivation of a sense of inevitability about some allegedly unique – often belligerent – identity that we are supposed to have and which apparently makes extensive demands on us (sometimes of a most disagreeable kind)”.

By centering resistances on the idea of ​​identity, we might unknowingly be contributing to a reproduction of the discourses that essentialize it.

By adopting a stance of resistance and emancipation based on the essentialization of identity we run the risk of unconsciously reinforcing and legitimizing cultural codes that are imposed upon individuals and communities, both from the outside and from the power exercised by local elites. As Seyla Benhabib points out in The Claims of Culture: culture-based arguments may have illiberal consequences, drawing “rigid and firm boundaries around cultural identities” and leading to the need to “‘police’ these boundaries to regulate internal membership and ‘authentic’ life-forms”. Ultimately, these limitations privilege the “continuity and preservation of cultures over time as opposed their reinvention, reappropriation, or even subversion”, which can legitimatize “culture-controlling elites” due to a lack of confrontation with “inegalitarian and exclusionary practices”. Once I heard an elder leader of an Afro community say about a young man, who had decided to leave his town to study mathematics in an overseas university: “For me, he is no longer a black person”.

The rural communities with which I work in Colombia find it difficult to cooperate with each other in defense of their territories and livelihoods against the global powers of both legal and illegal extractivist forces, because the instruments that national legislation and jurisprudence has put in their hands to do so, are mostly defined in terms of campesino (“peasant”), Afro or Indigenous identities, which produce discord instead of promoting coordination. In 2011, diverse communities of the Montes de María region, came together to negotiate the creation of an “intercultural territory" which aimed to integrate the different kinds of common-property and self-government organizational forms legally prescribed for distinct ethnic groups and rural communities. To this date, that initiative has not prospered, and has experienced increasingly bitter conflicts: the identity-based territorialities produce a misalignment of incentives between different communities, juxtaposing their interests and thus producing political cleavages between neighboring, and even overlapping territories.

In that same region, as in many others, legal instruments, such as the consulta previa (legally mandated consultations which have to be held with ethnic communities that might be affected by development projects), are strategically instrumentalized by cartels of lawyers, governmental agencies and private enterprises in order to pit different communities, or even different groups within the same communities, against each other for economic or political gain. Up to what point do institutional designs for the reparation and protection of identities instead divide persons and communities, producing the contrary effect of facilitating and increasing the global conquest of local territories?

The fundamental capacity that enables people to act against global hegemonic powers and extractivist economies is the ability to draw knowledge from the richly diverse experiences of a common humanity.

The fundamental capacity that enables people to act against global hegemonic powers and extractivist economies is the ability to draw knowledge from the richly diverse experiences of a common humanity, to use international legal and political instruments, and to interact with transnational and multicultural activist networks to defend the small territory each person calls home. In this sense, local emancipation requires cosmopolitan citizenship.

Let us take a moment to rethink the place of ​​identity in our cultural interpretations and in our proposals for social intervention. Perhaps we should not grant “identity” an unquestionable centrality. To what extent, by doing so, do we invite the uncritical reproduction of certain cultural and identity patterns? These patterns can put unjust epistemic limits upon the self-understanding, the awareness of capabilities, and the unchaining of aspirations of individuals and communities that possibly seek—above all—to be free.

Perhaps the most appropriate fulcrum to strengthen the levers of resistance and emancipation that we have the duty to defend is that of our common humanity, and not that of our differences or insularities. Maybe the true decolonialization of our minds and institutions requires the reinterpretation of our local struggles in terms of a cosmopolitan recognition of the universality of our claims for dignity and justice. Human rights and rights of citizenship may be more solid beams to frame concrete claims for justice and equality, than the beautiful but ambiguous, legitimate but confusing, strong but possibly self-defeating fabrics of identity.

We must remember that roots nourish, but that they also anchor.

Pablo Abitbol is a professor of New Political Economy, Big History, and Theories of Democracy and Development in the Faculty of Social Sciences and Humanities of the Technological University of Bolívar (UTB), where he also coordinates the Regional Historical Memory Group.