Understanding the logic of expectations could help us predict why some people follow orders to violate human rights—and others don’t.

Leaders do not generally commit human rights abuses themselves; they order them.

In our research, Tiberiu Dragu and I use a game-theory model to argue that a third mechanism can also work to improve human rights practices under certain conditions: the logic of expectations. A key point in developing this logic is that leaders do not generally commit human rights abuses themselves; they order them. The leader’s agents—be they military, police, or other security agents—are tasked with violations, and whether they follow those orders depends in part on whether they expect others to do so.

Let us conduct a thought experiment. Put yourself in the shoes of a soldier in an authoritarian leader’s army. Protestors are in the streets en masse, and your unit has been ordered to fire on them. If the protest is put down, your boss will stay in power; otherwise, he might be deposed. You must quickly choose whether or not to obey the order. 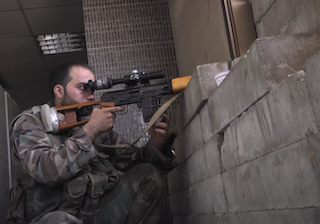 Perhaps you believe that firing on unarmed civilians is wrong, in which case you might revolt. But what would happen to you if the rest of your unit fires and you don’t? You might be next to face the firing line. Your deeply held norms may not be strong enough to prevent you from firing, especially if you expect that others don’t share them.

Perhaps you believe that firing on unarmed civilians could expose you to future legal sanctions.  If the other soldiers obey the order, the protest will likely be put down, and the regime will remain in place.  In that event,  a leader is unlikely to put his own troops on trial for following his orders. Similarly, if you do follow the order to fire but no one else does, the regime may be toppled and you could face trial under the new regime (if the protestors don’t get to you first).

In both cases, your decision depends, in part, on what you expect the other soldiers to do. This is the heart of the logic of expectations. Individuals act, in part, on what they expect others to do. In the scenario above, even if you don’t hold human rights norms, you might disobey the order to fire if you think others hold such norms. Likewise, even if you don’t expect to face consequences for firing on civilians, you might disobey the order if you believe others have such expectations.

The idea underlying our work is hardly new to social science. In game theory, this type of scenario is referred to as a coordination game; its wide-ranging applications to business, politics, and social life have been studied by scholars such as Russell Hardin, David Lewis, and Barry Weingast. In 1960, Thomas Schelling wrote of an experiment he conducted with his students. They were given a hypothetical scenario in which they were to meet another person somewhere in New York City. The students were asked where they would go to meet this person if the location were not explicitly known to them. The most common answer was Grand Central Terminal. Why? Schelling argued this location was not necessarily preferable to others. Instead, students answered Grand Central because they expected the other person to expect to meet there. In this scenario, Grand Central is what Schelling calls a focal point: a choice individuals make because they expect others to make it.

The logic of expectations applies this concept to the human rights context. The central implication of our argument is that the logic of expectations can reduce  rights abuses to the extent that respect for rights protection becomes a focal point among those who have the potential to abuse human rights: government operatives, agents, and soldiers.

This has important implications for human rights advocacy. The potential effects of advocacy are not limited to persuading individuals that human rights abuses are immoral or that such abuses could lead to negative consequences. Advocacy could be highly effective to the extent it can be used to make government agents believe that other government agents expect to face legal sanctions or hold norms against human rights norms.

This means that messaging could focus on influencing regime agents’ beliefs about their peers. Publicizing examples of disobedience among security forces may be especially effective.

But governments can also play the game. Authoritarian leaders, in particular, seem to have an intuition for the kind of argument we make. They organize their security forces in ways that prevent disobedience from becoming focal, like the multiple layers of security forces in the Saddam Hussein regime. They also try to control the information available to their forces, such as when Syria's Bashar al-Assad created a housing complex in a suburb of Damascus specifically for military officers. Among other things, this type of structure can prevent advocacy from reaching its targets.

As many in the human rights community are well-aware, information is crucial. Getting the message to the right audience is often a key challenge. While the logic of expectations does not provide a solution to this problem directly, it helps deepen our understanding of how and when information can be effective in reducing repression.

Yonatan Lupu is an associate professor of political science and international affairs at the George Washington University.