A Colombian lawyer and professor reflects on how research can serve as a complement to peacebuilding, but also as a catalyst for further conflict and trauma. 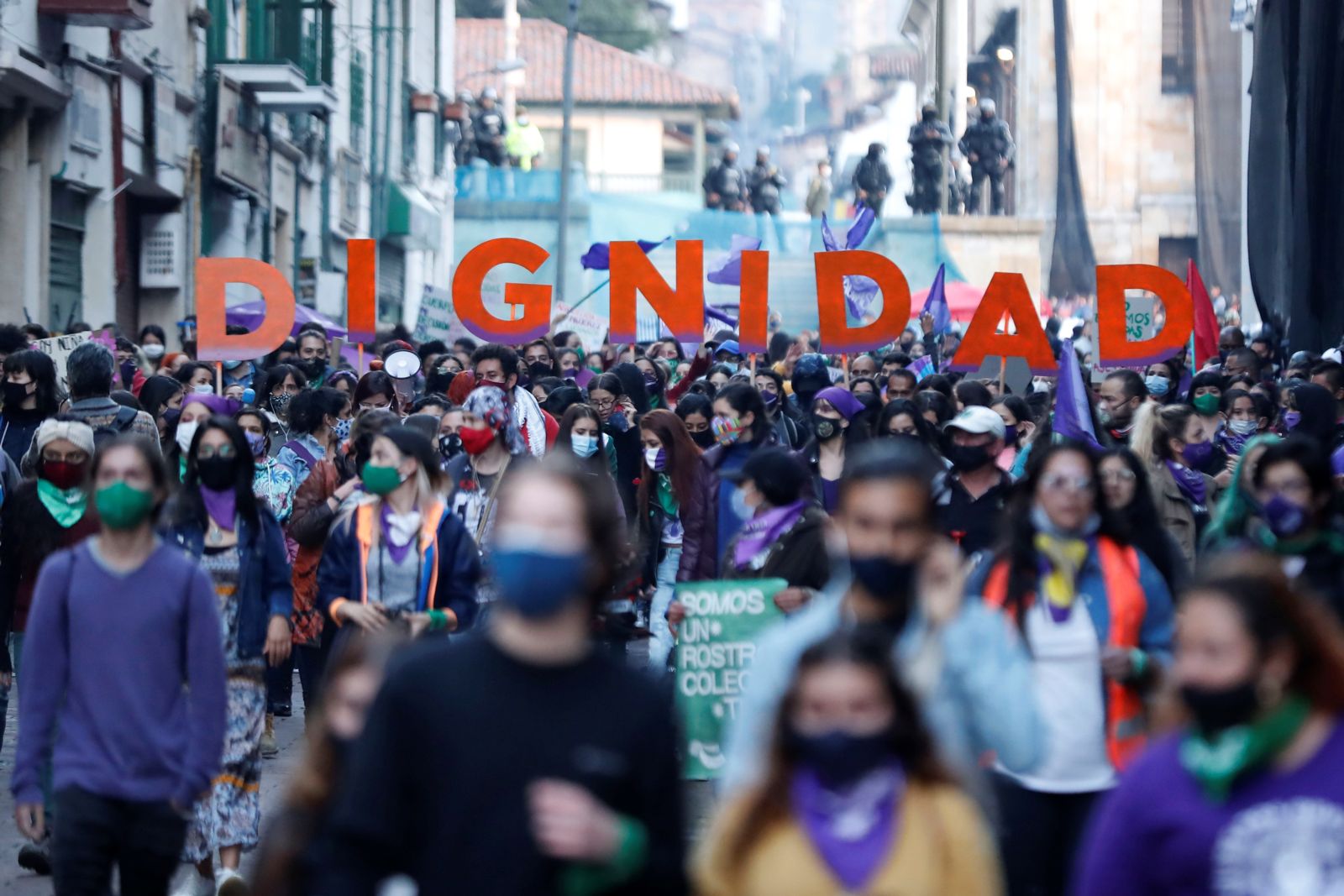 Collectives of women marched through the streets of Bogotá (Colombia) in November 2020 to commemorate the International Day for the Elimination of Violence against Women. EFE/ Mauricio Dueñas Castañeda

The 2016 Peace Agreement in Colombia attracted a wave of foreign and domestic academic research. One of the innovations that has captivated the attention of scholars of transition and armed conflict is the gender focus of the Agreement, a political achievement of Colombian feminist organizations that synthesizes a commitment of more than two decades for the visibility and the judicialization of sexual and gender crimes committed during the conflict, among other aspects.

However, the explosion of research on conflict, transition, and gender led to an overexposure and saturation of local actors such as organizations, victims, and researchers, which generated wear-and-tear and questionable practices on the levels of ethical knowledge production and security. A goal for 2021 is to understand these practices and seek their transformation.

Until recently I worked at an NGO to promote the visibility of the situation of LGBT people who are victims of the armed conflict in Colombia. Those familiar with the work of human rights defenders know that it involves a large number of activities: litigation, investigation, advocacy, attention, and the direct documentation of victims.

After many setbacks in 2017, the implementation of the Agreement during 2018 brought with it a new task that would occupy an important part of the agenda of the team I was working with: countless Colombian and foreign researchers interested in various questions about the relationship between the situation of LGBT people rights and the armed conflict. Making a moderate calculation, between 2019 and 2020, I invested 40 of my working hours conducting interviews with researchers.

Carrying out this type of work creates invisible burdens for those who are in the “passive” place of the investigation: emotional and physical fatigue, anxiety and above all, the feeling that valuable information and time are going from our hands for what will ultimately be a footnote in an article we will never see.

These harmful practices must be part of the conversations that we consider when walking the winding path of transition and which the investigations about human rights must take into account.

On the one hand, it is essential to recognize the reasons for its relevance. Research on sexual violence in war has made it possible to consolidate a robust international agenda that, formally at least, has committed states and international actors to the fight against impunity for these forms of violence. Colombia has not been outside of this global trend. There is evidence of this is in the preeminence of Colombian feminist organizations that made their way into the Peace Agreement and today fight tirelessly for the achievement of justice for the victims before entitites such as the Special Jurisdiction for Peace.

However, considering that the issues and actors involved are sensitive and vulnerable, certain practices can and should be transformed. One of them has to do with sources, a dilemma that plagues academics and journalists alike. What is particularly problematic is the obsession with the direct and raw stories of the victims, since it leads us to think that the collective understanding and processing of the horrors of the conflict is only possible in the presence of an unprocessed tale. In addition to curtailing our imagination, it exposes people to unnecessary forms of re-victimization.

These harmful practices must be part of the conversations that we consider when walking the winding path of transition and which the investigations about human rights must take into account.

A virtuous path ahead involves looking into more detail at what organizations and victims are already producing in order to dignify stories of violence. Last year, for example, Colombia Diversa launched Celeste, an interactive platform through which anyone could find their star in a constellation of the life stories of LGBT people, who were victims of violence due to prejudice inside and outside armed conflict. An investigation that uses Celeste as a source would not only be innovative, but it would contribute to the transformation of the canon by expanding what we consider to be legitimate sources of investigation.

Another issue is related to the direct treatment of domestic investigators. The Bakavu Series (Silent Voices) project, a program of the University of Ghent that brings together academics from the Global north and South who question the ethical dilemmas of this type of research, has found that the practice of assuming that those who work locally are less intellectually and technically qualified is prevalent.

Colombia is not the exception. Last year, for example, a coalition of feminist lawyers, which I am part of, received the support of an international organization to initiate a dialogue with a think-tank from the Global North on expertise in the prosecution of sexual violence in armed conflicts. Upon the arrival of the experts, the exchange became more of an evaluation of our knowledge, so that they could make a diagnosis of how to support our work.

To tackle this problem, it would be worthwhile, first, not to assume that the reason why pressing problems such as sexual violence in conflict are not resolved is due to the intellectual or political weakness of local researchers or activists, or even the victims themselves. Second, do the exercise of getting to know in-depth the context in which it is intended to develop the research and rigorously map out the local intellectual production. This insistence on knowing the context is, in fact, one of the recommendations most frequently suggested by researchers in the Global North burdened by the ethical issues they encounter when conducting their own research.

Colombia is a country that has been producing high-quality analysis of its conflict for at least four decades. Ignoring it is an irresponsible practice that reproduces inequalities from the point of view of knowledge production between the Global North and South, as it favors the vertical and foreign gaze over the local and implicated gaze of those who develop specialized knowledge about a conflict that runs through them.

Finally, as I mentioned in the beginning, these investigations lead to emotional and physical fatigue in a way that impacts the safety and integrity of local actors. The topic of the emotional costs of research is not new, and yet it remains taboo both in academia and in the world of activism. To confront this, it is worth taking a look at the pioneering work that feminist organizations in Colombia have advanced by promoting practices of care, protection, and self-protection as a fundamental basis for the investigation and support of victims of sexual violence.

Therefore, it is essential to ask yourself before oversaturating the emails of organizations with demanding and insistent requests for interviews: 1) have I investigated enough through secondary sources and am I convinced that the information I need I can't get it in any other way?; 2) Can I commit to ensuring that the results of my research will contribute to the work of local actors whom I ask to collaborate with my work? In the event that the second answer is negative, reassess the urgency of that testimony in your investigation, or at least do not commit to sharing the results.

Understanding and transforming these concerns into more ethical, fair, and safe practices for the integrity of local actors is a good way to remind ourselves that research can serve as a virtuous complement to peacebuilding, but also as a catalyst for further conflict and individual and collective traumas.

María Daniela D. Villamil is a L.L.M. (Master of Laws) candidate at Harvard University. Feminist lawyer, professor at @UExternado. Author of The Orders of Prejudice (Los Órdenes del Prejuicio) in @ColombiaDiversa. Her Twitter is @MariaDDVillamil