A transnational racial justice lens is essential to understand recent Haitian migration through the Americas, but also to develop any future policy responses. 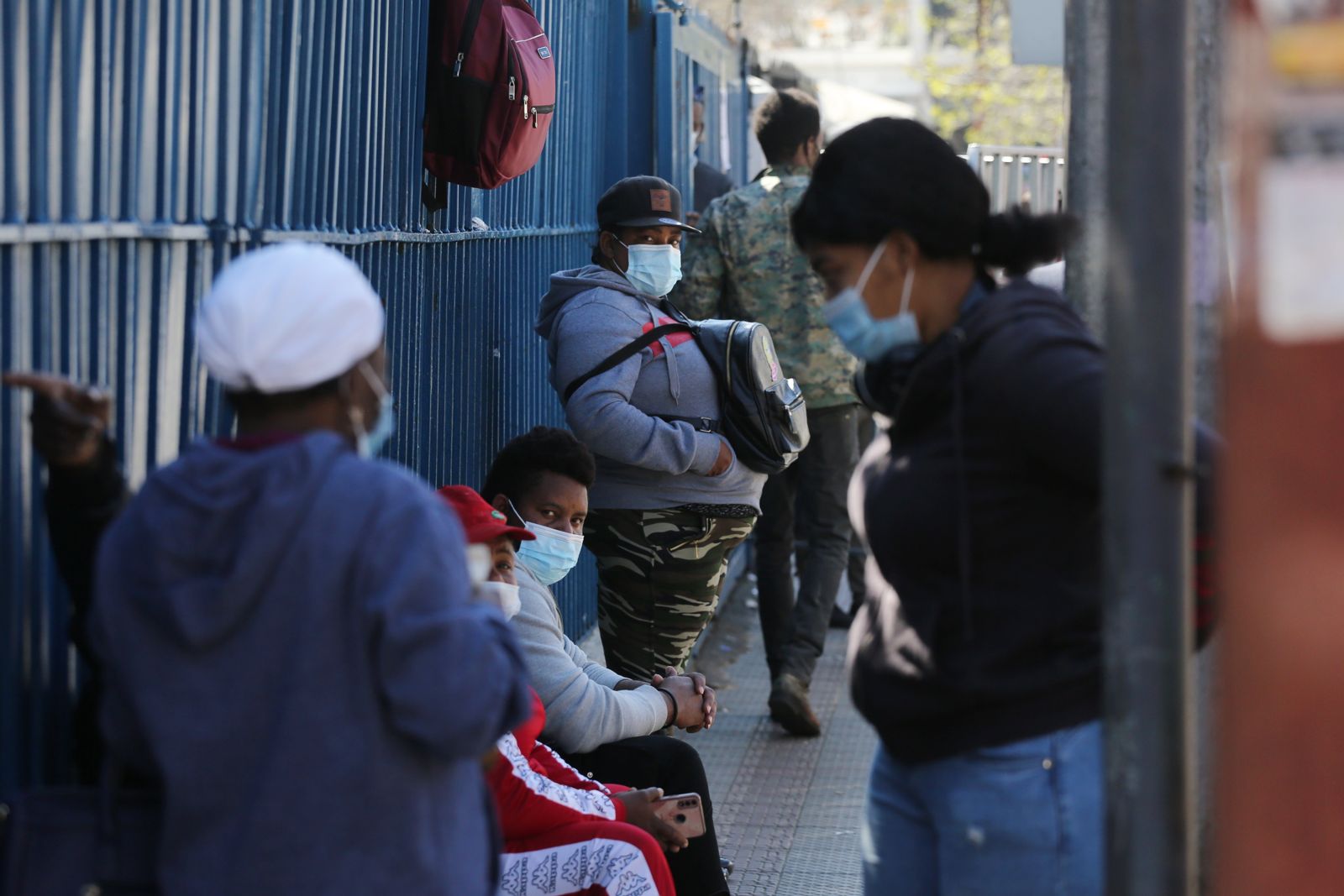 Haitian citizens arrive at the Haitian Consulate to try to regularize their documents in September 2021 in Santiago, Chile. EFE / Elvis González

Many were shocked by the recent ‘crisis’ at the U.S.-Mexico border, when thousands of Haitian migrants attempted to enter the United States and were met with violence at the hands of U.S. Customs and Border Patrol officers. More than 7,500 Haitians have since been deported from the United States under the guise of Title 42, a widely criticized ‘public health’ measure, which likely violates international law (particularly the principle of non-refoulement) and is especially harmful given the “violence, lawlessness, and instability” in Haiti right now.

As many have noted, this response forms part of a long history of anti-Black, and specifically anti-Haitian, U.S. immigration law and policy. What is not getting sufficient attention, however, is how racism and xenophobia have already impacted these Haitians along their migration route. A transnational racial justice lens is essential not only to understand recent Haitian migration through the Americas, but also to develop any future legal or policy responses to migration in the region.

In successive Latin American countries, immigration laws and policies were initially welcoming to Haitians, if only to facilitate the temporary exploitation of ‘cheap’ Haitian labor. Then, as national economies declined, right-wing governments fomented racist, anti-immigrant sentiment and restricted immigration in order to exclude Haitians from legal protections and national territories.

Many Haitians first migrated to Brazil following the 2010 earthquake that struck Haiti, which exacerbated the country’s political and economic instability and led to greater insecurity and violence. Starting in 2011, Brazil issued work visas to Haitians, in part to use their ‘cheap labor’ to prepare for the 2014 FIFA World Cup and 2016 Olympics. Between 2010 and 2018, almost 130,000 Haitian nationals entered Brazil, yet fewer than 7,000 were granted refugee status, in part because fleeing a natural disaster was not an accepted legal basis. When Brazil fell into an economic recession in 2014, many Haitians were left without employment, fewer pathways to permanent legal status, and rising racism and xenophobia in the country.

A transnational racial justice lens is essential not only to understand recent Haitian migration through the Americas, but also to develop any future legal or policy responses to migration in the region.

Starting in 2014, many Haitians began migrating to Chile from Brazil and Haiti. Former Chilean President Michelle Bachelet, as part of Chile’s humanitarian response to the 2010 earthquake in Haiti, made it easier for Haitians who entered Chile on tourist visas to obtain work visas once they found employment in the country. The number of Haitians residing in Chile grew exponentially to more than 185,000, as of December 2019.

But with increased visibility came widespread racial and gender-based discrimination that impacted Haitian migrants’ ability to find employment, access services, or otherwise integrate into Chilean society. According to one 2018 study that surveyed the working conditions for Haitian migrants, of which 33.8% of those interviewed were women, 48% of the sample had experienced discrimination and cited this as a significant barrier to gaining employment.

As the visibility of Haitian migrants grew in Chile’s urban centers, the issue of immigration was thrust to the forefront of public debate. Then-presidential candidate Sebastián Piñera fomented anti-immigrant sentiment in his electoral run and, after assuming office in March 2018, swiftly discontinued the visas that had enabled Haitians to work in Chile. From October 2018 to May 2019, his administration “voluntarily returned” around 1,400 Haitians to Haiti. There is no record of any Haitian being granted refugee status between 2010 and 2019.

Many of these Haitian migrants, often with their young Chilean- or Brazilian-born children, had to leave South America and seek safety and security in the United States. The migration route traverses approximately 7,000 miles and eleven countries, and its horrors—particularly in the 100-mile Darien Gap rainforest between Colombia and Panama—are well-documented. When these migrants reached Mexico’s southern border, they encountered the “Mexican Wall.”

Since 2019, largely due to the U.S. exertion of economic pressure on Mexico, Mexican authorities have stopped issuing the “exit permits” that previously enabled Haitian (and African) migrants to transit to the U.S.-Mexico border to seek asylum in the United States. Instead, Haitians and their children have been entering the Mexican immigration system in higher numbers: as of August 2021, Haitians were the second-largest asylum-seeking group in Mexico after Hondurans.

As documented in our recent report, Haitians face numerous obstacles in Mexico, including: language barriers; racist abuse by immigration officials, other migrants, and Mexican nationals; discrimination in employment and housing; and social exclusion and isolation. Haitian women face gendered forms of discrimination, including when seeking reproductive healthcare. As described by one of the Haitian women interviewed in the report: “It’s like the blood that runs through their veins is not the same as the blood in our veins. They look at you like you are nothing because you’re Black.” Haitian and other Black migrants, alongside Afro-Mexicans and Indigenous Mexicans, are also negatively impacted by pervasive racism and skin-color discrimination in Mexico.

It is in this context, after waiting for months or years to be processed by an under-resourced and over-burdened Mexican immigration system, that thousands of Haitians recently arrived at the U.S.-Mexico border. This is not a temporary ‘crisis’: there are still thousands of Haitians in Mexico, and thousands more on the migration route, who are unlikely to be deterred from seeking asylum in the United States.

As outlined above, a racial justice analysis of Haitian migration in the Americas not only illustrates the racially discriminatory human rights violations they experience, but also uncovers how structural anti-Black racism pervades the region and successive countries’ immigration laws and policies. Going further, a racial justice analysis also illuminates the limits of international refugee law. The definition of “refugee” articulated in international refugee law often excludes Black, Indigenous, and other racialized people who are increasingly forced to migrate because of global inequality (“economic migrants”) and, relatedly, the environmental and human impacts of climate change on the most marginalized nations and populations (“climate migrants”).

These phenomena are the current manifestations of histories of (settler-)colonialism and slavery, (U.S.) imperialism, and (ongoing) natural resource exploitation throughout the region, including in Haiti, and must be understood as racial justice issues at both national and transnational levels. Responding to these phenomena, and specifically the Haitian migration occurring as a result, requires not only a regional response informed by human rights but also a racially just one as well.

S. Priya Morley is the Racial Justice Policy Counsel at the Promise Institute for Human Rights at UCLA Law. She is a Canadian lawyer, with an LLM in International Legal Studies from NYU School of Law and law degrees from McGill University.