Myanmar is taking significant strides towards political and economic liberalization after decades of military dictatorship, yet a series of violent attacks against Muslims is shaking confidence in the country. Surprisingly, Buddhist monks support much of the violence, notes Wai Yan Phone.

Buddhism is widely perceived as a fundamentally peaceful religion. Thus, it has been a shock for many to see Buddhist monks in Myanmar (also known as Burma) take a prominent role in violence against the country’s minority Muslims.

After all, it was less than a decade ago -- in 2007 -- when tens of thousands of Buddhist monks and other anti-government demonstrators peacefully assembled on the streets of big Burmese cities in defiance of the Burmese generals. More recently, the world watched with astonishment and hope as Myanmar began to gradually emerge from decades of military dictatorship following elections in 2010 and 2012. Yet the rise of right-wing religious nationalism is posing a serious obstacle to the country’s democratization process. Buddhist monks are again in a lead role -- this time their target is not a repressive regime, but the religion of Islam.

While Burma’s Buddhist Sangha (the community of monks) technically stays aloof from secular affairs, the Sangha’s role has evolved into a strong institution that is a driving force in the political and social fabric of Burma. The Sangha has stepped into politics because it thinks monks are responsible for protecting the country’s Buddhist identity.

Buddhism and nationalism have long been connected in Burma. The Sangha, which plays a leadership role for the monks, also has an overwhelmingly influential role in Burmese Buddhist society.

Monks have had a role in civic life since Britain annexed Burma in the 19th century. Some of the changes that have impacted Buddhism over the decades include the loss of patronage from the king (who was removed by the British), the growing popularity of Christian missionary schools among wealthy families, and increased migration of Indians and Muslims from India and Bangladesh into Burma.

The trend prompted an increase in anti-Indian sentiment that is both economic and social. Buddhists have claimed that Indians are monopolizing jobs, and social tensions increased when Muslims from India’s Bengal state began to marry Burmese women. Intermarriages with Burmese became a common practice among Muslims, whose religion permitted polygamy. Burmese women who married Muslims converted to Islam; hence, their children became Muslims. These are some of the claims cited by nationalist monks who worry about growing Muslim influence, although it is worth noting that Muslims are a tiny fraction of the population vis-à-vis the significant Buddhist majority.

There have been anti-Indian and later anti-Muslim riots in Burma since the 1930s, when as much as half the population of Yangon, then the capital city, was Indian. There was bloodshed in Rakhine state, in the far west of Burma bordering Bangladesh, during World War II. More recently Buddhist monks participated in riots in Mandalay (1997), Taungoo (2001), and Kyaukse (2003).  The unrest flared on an unprecedented scale in Rakhine state in 2012. In almost all these riots, there are claims that Buddhist monks were involved in attacking mosques and Muslim-owned properties.

There have been claims that members of the Sangha played a central role in fanning these anti-Muslim flames. The Sangha in general does not endorse violence, but members of the Sangha have spread anti-Muslim concerns, such as the view that Muslims are stealing Burmese women and are rumored to be paid to marry Buddhist wives. Given the monks’ high social status in Burma, neither successive governments nor the majority of the population has openly questioned these views.   The 1982 Citizenship Law, which disqualifies nearly 1 million Rohingya Muslims and other Burma-born ethnic Indians and Chinese from citizenship, is evidence that the government shares concerns about non-Buddhists.

The monks’ anti-Muslim discourses range from extreme to milder approaches. Monks like Wirathu, abbot of the large Masoeyein monastery in Mandalay, are extremists. The regime jailed Wirathu in 2003 for inciting anti-Muslim riots in Mandalay and he was released in 2012. He denies links with violence and says he is simply preaching to protect and defend Buddhism, but his sermons call for discrimination against Muslims, such as boycotting their shops and shunning interfaith marriages. Time magazine labeled him “the face of Buddhist terror”.

Other monks take a softer approach to the perceived threat, though some have suggested that Buddhism could disappear from the country if preventive measures are not taken. They point to the demise of Buddhism in India, Pakistan, Afghanistan and Indonesia. Scholars contest the argument that Islam is to blame for the demise of Buddhism in these countries, yet monks in Burma cite them as examples of Muslim persecution of Buddhists. They also voice concerns that the Muslim population is growing faster than the Buddhist population, and about illegal migration from neighboring Bangladesh.  Radical or liberal, monks agree that Burma and Buddhism must be fortified against Islam. 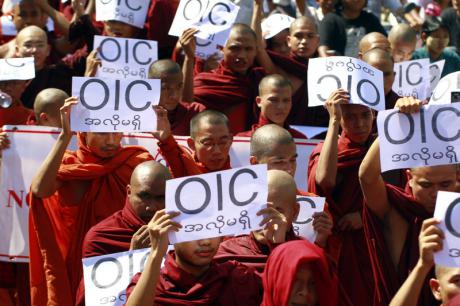 Thousands of Buddhist monks protest over the Organisation of the Islamic Conference (OIC) opening an office in Myanmar. Htoo Tay Zar/Demotix. All Rights Reserved.

Amid mounting fear and growing nationalist sentiments, the Sangha, Burmese authorities and general public are becoming united in combating the Muslim influence. Some members of the government, such as religious affairs minister Sann Sint, have defended Wirathu and other anti-Muslim monks. In a country that has long been tightly controlled by the government, it is also notable that officials give the monks tacit backing by allowing them to give anti-Muslim speeches.

Even monks who have criticized the government in the past have thrown themselves behind this Buddhist nationalist movement. Among them is the Ven. Thitagu Sayadaw, a revered monk who oversees the Thitagu Buddhist Missionary University near Mandalay and is involved with many charity programs. He courageously condemned the junta after it violently broke up anti-government demonstrations in 2007 yet also supports Burma’s widely-criticized Citizenship Law. As cited in the Rathapala Meint Khun Mya, a book published in Burmese, the Thitagu Sayadaw has said publicly that when it comes to survival of a nation, “human rights come only second to national security,” noting that “even the United States puts national security above human rights norms.”

A monk’s conference in Yangon last year suggested that parliament pass a law requiring non-Buddhist men to convert to Buddhism if they want to marry a Buddhist woman, with a prison sentence if they fail to convert. Though many educated women in Burma opposed the suggestion as a violation of human rights, supporters claim that millions of people have signed a petition to show parliament their support of the proposed law.

Not all Burmese monks agree with their colleagues’ involvement in politics. In an interview with the media, Badanta Panna Wuntha, a leading monk from the 2007 Saffron Revolution, observes: “We can’t always think with a religious slant. If we do … [we]’d become a theocratic nation. … We’d be right back at the feudal age.” Yet such voices are drowned out by the radical monks, who have influenced not only members of the public but also members of parliament – including lawmakers planning to submit the interfaith marriage law with the blessing of monks.

There will be doubts about the prospects for of Burma’s peace and prosperity as a multi-ethnic, multi-cultural society as long as fear, hatred and discrimination are wrapped in the disguise of nationalism. Both the Sangha and lay society have to ask themselves what sort of national identity they want. In a country with such diverse ethnicities and cultures, a peaceful, prosperous and democratic nation will not result from building national identity around the majority ethnic group and religion. In the future, Burma’s national identity should encompass its unique multi-ethnic and multi-cultural characteristics, yet need not discount Buddhism’s important influence on many aspects of Burmese culture.

Wai Yan Phone is editor-in-charge of the Journal of Human Rights and Democracy, published by the Myanmar Knowledge Society, based in Yangon, Myanmar (Burma).