Human rights—as a movement that critiques systemic inequalities and affirms our common humanity—offers a transformative alternative to a politics of fear and exclusion.

The election of Donald Trump is the most recent manifestation of a politics of fear and exclusion that is affecting every region of the world. This politics taps into serious concerns that arise from a faltering economic model and growing inequality, corporate capture of state institutions, and uncertainty in the face of rapid and precarious change. However, Trump and others address these legitimate anxieties and grievances with a deliberately misplaced analysis of both the root causes and the solutions, which promise to further entrench the socioeconomic and political insecurity that threaten so many communities within and beyond the United States.

Trump has emboldened an overtly anti-immigrant, anti-Muslim, racist and misogynist rhetoric. Hate crimes have already begun to grow.  As Inga Winkler suggests, we must confront stigmatization and “othering” in both the private and public spheres, strategically utilizing domestic and international tools. A small percentage of voters embraced the more disturbing of Trump’s statements and personal past. Many—who were safely white and often male—too easily overlooked them. Yet they were arguably most drawn to his promises to bring jobs back to the United States and his positioning as an outsider versus Clinton, who was depicted as coopted by Wall Street interests and part of a corrupted political system. 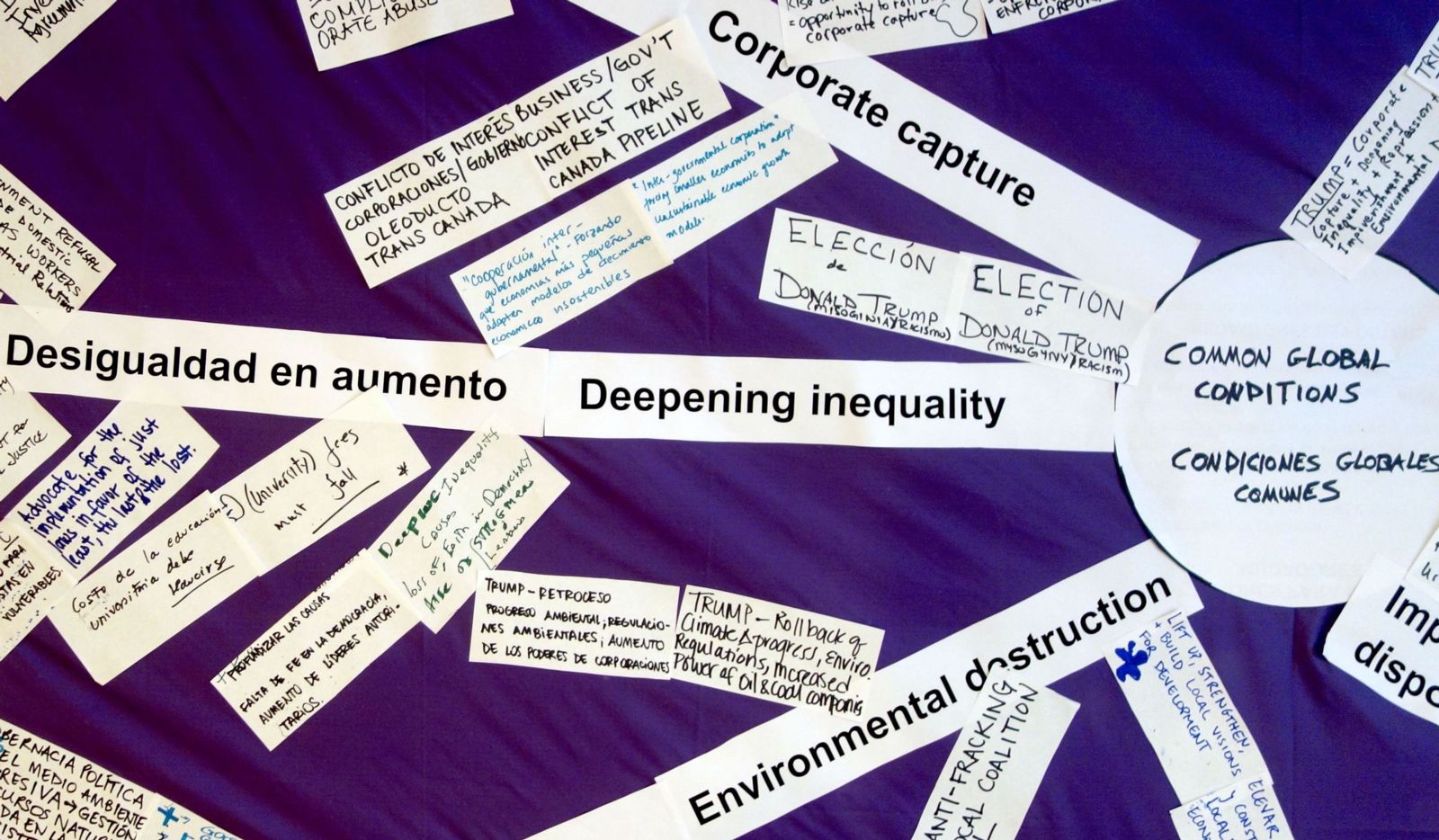 Trump and others address legitimate concerns with growing inequality and uncertainty in the face of rapid and precarious change with a deliberately misplaced analysis of both the root causes and the solutions.

An increasingly precarious middle class—Trump’s primary base among white voters—arguably clung to the small privileges or position they have left via the troubled history of the United States. Yet Trump—echoing many others in or seeking power in multiple countries—actively directed their frustration, anger and fear against immigrants, Muslims, women and people of color instead of towards the systems that made him a billionaire and undermine human rights globally. In doing so, he made a cynical and deeply dangerous call to reclaim an “America” in which many were excluded domestically and US power was often utilized to suppress peoples’ movements around the world. In the United States, we have seen the likes of Trump before, whether in the backlash against the abolition of slavery or in the many political leaders who denounced Rev. Dr. Martin Luther King, Jr.’s call to link struggles against racism, impoverishment and militarism.

In the hands of Trump and his emerging cabinet appointees, the failures of the neoliberal economic model will likely be further twisted to undermine civil rights and inclusive social values. Even for the white working and precarious middle class, he is not promising economic and social rights amid his proposed corporate tax cuts, new pushes for privatization of public goods and services, and denial of climate change.

Significantly, one third of the nearly 700 counties that supported President Obama, in both 2008 and 2012, voted for Trump. Perhaps even more striking, the poor and working class—black, Latino, and white—often didn’t vote, in part due to widespread voter suppression (such as legislation restricting how, where and when people could vote) and in part because neither of the major parties spoke to their concerns. Clinton beat Trump among voters making less than $50,000; Trump won among white voters without a college degree. However, the turnout of voters both without a college degree and making less than $50,000 fell significantly. Neither Trump nor Clinton effectively mobilized these voters.

Human rights hold the potential of moving our vision and action beyond failed political parties and deep polarization.

In confronting impoverishment and exclusion, human rights hold the potential of moving our vision and action beyond failed political parties and deep polarization. When we demand material well-being, participation in decisions that affect our lives, and dignity for ourselves, our children and ultimately for all communities, we embrace the founding impulse of human rights. In this regard, the story of human rights is foremost a history of social movements and includes the abolition movement; anti-colonial struggles for the right to self-determination; the anti-apartheid struggle in South Africa; the ongoing advocacy for memory, truth and justice in Argentina; the long history of women’s, workers’ and indigenous rights movements, among others. Particularly in this moment, the realization of human rights will seemingly require similar popularization, mobilization and struggle to transform social systems.

As a result of peoples’ struggles for freedom and equality in particular historical moments, governments have accepted international legal obligations to respect, protect and fulfill human rights, and the resulting standards and mechanisms are often useful in advancing social justice. Over 160 countries have ratified the International Covenant on Economic, Social and Cultural Rights and thus have legal obligations to utilize their maximum available resources—including via international assistance and cooperation—to realize human rights in practice, and most notably in this context, the right to an adequate standard of living. The UN Committee on ESCR and other treaty bodies have also emphasized both formal and substantive equality. These standards have been integrated into many constitutions and influenced jurisprudence, policy and practice within numerous countries.

Internationally and nationally recognized human rights standards have been informed by and in turn provided a source of moral, political and legal legitimacy to movements for social justice. César Rodríguez-Garavito highlights the powerful ways that indigenous peoples transformed human rights standards and action into effective tools to fight extractive projects and climate change, effective national campaigns for socio-economic rights, and the potential of transnational collaborations. If human rights treaties and laws are less respected and implemented than trade and investment treaties and commercial laws, this serves to highlight the immense inequality and power imbalances that human rights advocates must confront. Beyond static standards, human rights are a powerful and living means to analyze and develop societal structures and practices, facilitate connection across diverse experiences and unite purportedly distinct struggles towards transformative change.

Over the past 18 months, some 20 social movements—members of ESCR-Net—have deepened a shared analysis of common global conditions via the human rights framework, questioning impoverishment and dispossession amid abundance, corporate capture of the State, deepening inequality, degradation of the environment, and growing repression. They also articulated emerging points of unity among their  movements, creating the Common Charter for Collective Struggle. This charter was affirmed by 150 representatives of ESCR-Net members—both social movements and NGOs—from over 40 countries, who met in Argentina, in November 2016. These members also underscored the necessity of integrating an intersectional analysis throughout their collective action—attentive to how policies, practices, laws, budgets affect differently situated communities—necessarily foregrounding the perspectives and leadership of those who have long resisted exclusion and dispossession.

As Jim Goldston highlights, critiques of mainstream human rights organizations and international institutions, which portray the movement as elitist and out of touch, contain “a glimmer of truth.” Yet he emphasizes that most advocates around the world are poor or modestly paid members of communities on the frontlines of struggles for justice, often confronting both hate crimes and economic dislocation. In the US, this is evident in many community-led struggles, including attempts to launch a new nationwide Poor People’s Campaign.

These emerging human rights movements in the US and their connections to similar movements in all regions of the world have perhaps never been more important. In the short term, Trump may fulfill some promises to rebuild infrastructure and save some jobs, even while projecting a narrative that continues to scapegoat migrants, Muslims, communities of color, women and “others” for any failings.  In the wake of his election and attempt to reclaim a troubling version of “America”, I am open to Samuel Moyn’s suggestion of looking to other tools and to creating diverse alliances to advance social justice. Yet I am convinced that human rights—as a movement emerging from those affected by injustice, actively critiquing systemic inequalities, and affirming of our common and interdependent humanity—offers a transformative alternative to a politics of fear and exclusion.

Chris Grove is Director of ESCR-Net, which connects over 270 NGOs, social movements and advocates across 70 countries to advance human rights for all.