‘If I lose my freedom’: preemptive resistance to forced confessions in China

Human rights defenders in China are increasingly using pre-recorded statements to control narratives to protect themselves against forced confessions.

On May 3, 2017 security forces in Southern China abducted human rights lawyer Chen Jiangang and drove him over 3,000 kilometres back to Beijing. He remained in their custody for over 80 hours, missing the trial of his client, Xie Yang, whose torture he had exposed in January.

At his trial, Xie Yang “admitted” to having been brainwashed by foreign agents, and on Hunan state TV repeated that he had sensationalised cases and denied having been tortured. But Xie Yang had anticipated this forced confession.

“If, one day in the future, I do confess—whether in writing or on camera or on tape—that will not be the true expression of my own mind."

Xie, detained in July 2015, wrote in a January 2017 affidavit: “If, one day in the future, I do confess—whether in writing or on camera or on tape—that will not be the true expression of my own mind. It may be because I've been subjected to prolonged torture, or because I've been offered the chance to be released on bail…”. Soon after his trial, Xie was released on bail, but he remains under constant surveillance.  Speaking to Radio Free Asia, his wife, Chen Guiqiu, who escaped to the United States with their two daughters, put it bluntly, “They are pretending to set him free. It's a joke; I want to make that very clear. He must be under unimaginable pressure.” 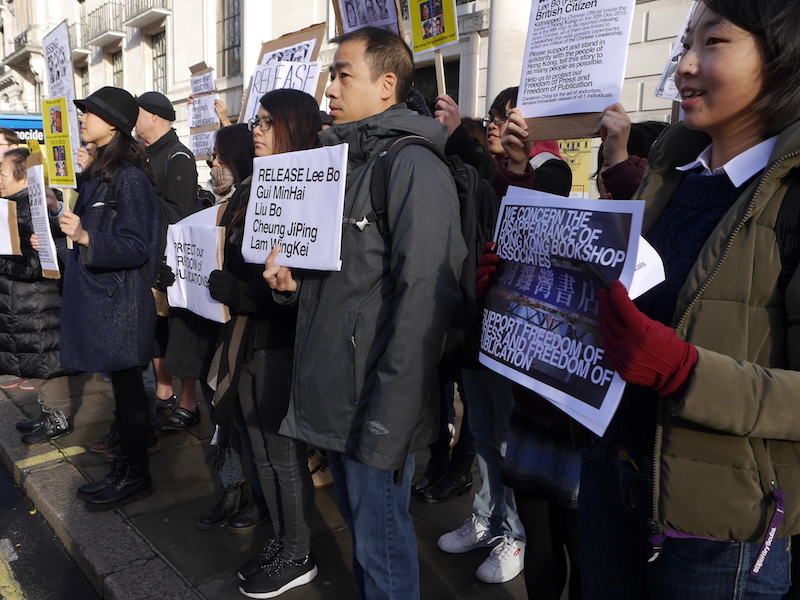 By Chris McKenna (Own work) (Some rights reserved)

It seems that the police abducted Chen Jiangang to ensure his silence during Xie’s trial, but as soon as he was taken, reasonable fears circulated that he would be “disappeared”. Like Xie, Chen’s understanding of the cruelty of China’s police state bred prescience. Three months earlier he had recorded a video statement to be released if he lost freedom. It was published on the China Change website soon after he was taken.

In the sombre five-minute video, Chen states that he has committed no crimes and would not accuse others. He states that any spoken, written, or video confession would only have been made under duress, threat or torture. He also asks for forgiveness if in the future he ends up on television accusing others or revealing names. Emotionally, he ends with, “If I am seized, dear kids, your father loves you. If I lose my freedom, release this video.”

While such pre-recorded statements are becoming more common for human rights defenders in China, others can learn from those like Chen Jiangang that protection also involves controlling narratives. Such statements are an important innovation in protection tactics in response to China’s increasing use of disappearances and forced confessions.

Forced confessions clearly violate Chinese law and international norms. For those awaiting trial, broadcasting forced confessions violates their right to a fair trial. Many forced confessions come following hundreds of days in pre-trial detention, which itself should be the exception, never the rule, and only for the shortest time necessary. The risk of torture is high in a criminal justice system reliant on confessions, while the pursuit of forced confessions drastically increases the risk. Victims of enforced disappearance and secret detention are especially vulnerable to torture.

Emblematic is the case of my friend and former colleague, lawyer Wang Quanzhang, whose exact fate and whereabouts have not been verified since police abducted him in August 2015. In January 2017, it was revealed that he had been tortured. Likely, Wang’s ongoing abuse is due to his refusal to perform a forced confession.

Following the “709 Crackdown”—a sweep by Chinese authorities that began on July 9, 2015 and resulted in nearly 300 lawyers and activists being questioned, detained or charged—several prominent human rights lawyers have been forced to deliver televised confessions. These include Wang Yu, parts of whose “confession” were so flagrantly similar to China’s then recent denouncement of a Hague Tribunal decision on the South China Sea that nobody questioned who had designed her “confession.” It also includes Zhang Kai, who later disappeared a second time after he publicly recanted his initial “confession.” A couple of months before Zhang’s disappearance, in June 2016, Hong Kong bookseller Lam Wing Kee also revealed that he and his colleagues at Mighty Current publishing had been forced into confessing, including Gui Minhai, a Swedish citizen, who remains incommunicado.

In his televised “confession,” Gui asked not to receive diplomatic assistance and renounced his Swedish citizenship. This was rightly dismissed as arising from coercion but what if Gui, like Chen Jiangang, had left a video preemptively dismissing such absurdity? For many who disappear into China’s Orwellian darkness, and re-emerge to “confess”, their last credible speech act may be what they leave with others, which in turn may offer some protection.

Contentious politics scholar Doug McAdam, and others, have identified the dramatisation of glaring state contradictions as creating opportunity for resistance. In terms of practical protection for rights defenders in hostile environments such as China, if preventive measures against certain forms of repression are increasingly adopted, the authorities are more likely to abandon them, ultimately protecting human rights defenders from being subjected to them in the first place

Once taken, it is often too late to ask that person what assistance they want. Even if allowed to meet a lawyer, pressure often limits what one is able to say. This is why recording in advance is crucial. Gui Minhai, for example, could have expressed that he had already given up Chinese citizenship and would never renounce Swedish citizenship. For others it could be stating that they would never accept a state appointed lawyer. Some might want to issue a statement about family members, that except if subjected to threat or torture they would never deny access to the family bank account, a measure the state has used to target family members’ economic livelihood.

Video is more powerful than written statements, and rights defenders at risk of disappearance or forced confession should record their statements—after conducting a thorough threat assessment—rather than just writing them down.

It is, of course, a damning indictment of China’s war on the rule of law that human rights defenders need to think of preemptively recording their own defence against baseless charges and forced confessions. But if more human rights defenders did so then the power of these repressive measures could ultimately be lost through the unmasking of contradictions.

This piece was adapted from an article originally published here on the Hong Kong Free Press.

Michael Caster is a human rights advocate, researcher, and civil society consultant. He holds an MA in Law and Diplomacy from the Fletcher School at Tufts University and an MA in Conflict Studies and Human Rights from the University of Utrecht. He has worked in China, Turkey, Tunisia, Thailand, and Myanmar. Follow him on Twitter: @michaelcaster.