Crypto markets for buying drugs might make things safer for consumers, but they do nothing to protect people in producer or transit countries.

The creativity and resilience of drug markets makes drug policy developments immensely challenging. One of the most interesting innovations in recent years are crypto markets, a kind of eBay for drugs, that provides participants with anonymity, uses crypto currencies for payment, and aggregates and displays customer feedback ratings and comments.” The question many are asking now is whether crypto markets permit drug transactions without violence, or at least with less violence. Drug trafficking, after all, is responsible for a wide variety of human rights violations, from farmers being driven from their land, or air sprayed with toxic agrochemicals that contaminate riverbeds and licit crops, to minors being exploited for labour to citizens being executed. Can a shift towards deep web trading mitigate any of these problems?

Research from academics in Australia and the UK, based on data from the Global Drug Survey, concludes that buying and selling drugs online is in fact significantly safer than doing so in offline markets, with fewer threats, intimidation, and violence. The research, while promising, is biased in the same way that crypto markets are: it is skewed toward a predominantly male, young, and educated sub-sector of the drug market located in the global North.

Protecting the health and safety of drug consumers is certainly important; however, the veritable absence of crypto markets in the global South means that those most affected by drug violence are still vulnerable. To argue that crypto-markets make drug trafficking safer is to distract from a much larger problem in the global drug trade, and in fact could further downplay drug-related human rights violations. 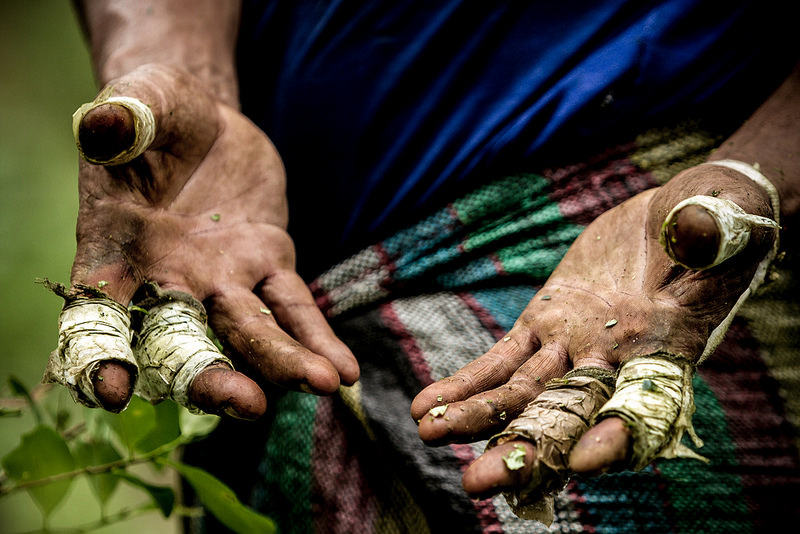 A coca farmer in Colombia. Drug trafficking is responsible for a wide variety of human rights violations, from farmers being driven from their land to minors being exploited for labour to citizens being executed.

In the global South, the present human rights crisis is the violence associated with offline drug markets. In Mexico, for example, the 2015 male life expectancy decreased due to mounting levels of killings and violence involved in the drug wars. The World Drug Report, and many countries, measure drug related deaths only in terms of drug use (overdose, for example), but we also need to account for deaths caused by violence in the drug markets. There is an opportunity here for human rights advocates to collect better data on deaths related to drug violence (both directly and indirectly) and with this information advocate for better protections of those most vulnerable. To this extent, the drug policy reform movement must insist on amplifying the ways impact is measured in drug policy, so that we account not only for the plants destroyed, or the shipments caught, but also for the side effects of such measures in the respective societies.

The drug policy reform movement must insist on amplifying the ways impact is measured in drug policy.

Online drug trading emerged in 2011 with the rise of Silk Road, a huge bazaar of drugs located in the deep web. Between 2011 and 2013, wholesale transactions in Silk Road were for substances sent from Canada, China, the Netherlands and Belgium, all producer countries of the drugs found in most deep web markets: cannabis, ecstasy/MDMA, stimulants, pharmaceuticals, psychedelics and opioids.

Crypto markets offer advantages such as better drug quality, anonymity and dealer accountability. Upon monitoring forums in the deep web, researchers have seen efforts in pedagogy and harm reduction measures from vendors, who recommend safe dosages, safe drug intake methods, and signs for identifying and preventing negative side effects. In this world, vendors serve as allies to consumers.

However, as Judith Aldridge and David Décary-Hétu (2016) recognize, “the utility of crypto markets…for drugs like heroin or cocaine seems likely to be limited at best.” This is due to the disparities of access in the technologies and infrastructure needed to participate in such a trading scheme, such as internet connection, secure postal systems, and knowledge of crypto currencies and the deep web. Certainly, these countries are participating in other online markets that require the same infrastructure to a certain degree, but just as the deep web is new to us all, the expertise required to participate in it is just starting to trickle down. As a result, producer countries of heroin and cocaine, such as Afghanistan, Colombia, Peru and Bolivia, are not trading in the deep web. These countries’ participation remains limited to traditional routes, while vendors in countries where crypto markets are trending take charge of the international trade.

According to UNODC, there is a clear association between higher homicide rates in transit countries, and higher still in cocaine producing and transit countries than in opioid producing and transit countries. The uses of violence in physical markets respond to the demands of illegality: territories must be controlled (with innocent civilians often caught in the crosshairs), discipline must be enforced by non-conventional means, and the constant threat of law enforcement leads to battles and confrontation. In Latin America, for example, 30% of homicides are related to gangs and organized crime, and torture related to drug trafficking is a well-known problem in Mexico particularly, but we lack sufficient information given that the World Drug Report does not measure solely drug related homicides. Rape, sexual assault and other gender-based violence—including sexual torture of female detainees—are also frequently associated with gang activity in the region.

Crypto markets do nothing to protect victims of these violent crimes, nor do they resolve the disparities that have made the war on drugs much more devastating in some countries than in others. The people who produce, distribute, and sell drugs in the Americas are largely absent in the deep web. The people who purchase drugs produced by these countries in the deep web, are, for the most part, shielded from violence due to their pre-existing privilege of living and consuming drugs in the global North. In this sense, crypto markets widen disparities even further between producers and consumers of drugs.

The real problem is that there is a huge policy bias regarding the interests of the global North vis-à-vis the global South with respect to which drugs should be controlled, and through which means. There is an excessive focus on the plants grown in the global South (coca, poppy, marihuana), and very little attention to synthetic production, which occurs in the global North (amphetamine-type stimulants, psychedelics). While the first are eradicated with militarized campaigns, the second are managed by shipments seized. For example, it seems highly unlikely that the Netherlands or Belgium would ever consider a military strategy to destroy producing labs.

This is another gap in which human rights advocates can stand: advocating for more attention on human rights protections for those involved in the global South, while highlighting the discrepancies in drug policy attention and enforcement. Reforming drug policy requires the constant reminder of the human rights violations in producer countries, for the sake of protecting “the health and welfare of mankind”. But eradicating these plants cannot come at any cost, nor can we continue to ignore that drugs are being produced in places other than Afghanistan and Colombia. Reducing the social costs of controlling and regulating drugs will need much more than an online marketplace reserved for a privileged few, along with abandoning the goal of a drug-free world.

A version of this article first appeared on Dejusticia’s Global Rights blog.

Isabel Pereira is currently a lead researcher for the Drug Policy Area at the Center for Law, Justice and Society (Dejusticia), based in Bogotá, Colombia. She is also coordinating the Dejusticia project: “Palliative Care and Human Rights in the Americas”.