In Africa and other regions in the global South, religion and human rights support similar values. For years, religion has helped disenfranchised groups the way human rights activists now hope to do. Some religious values pose challenges, but there is substantial room for collaboration. 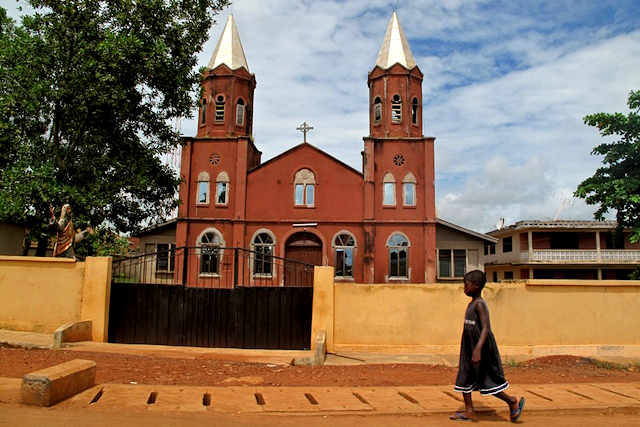 Ghana's religious institutions have a long history of protecting and promoting human rights in the country, writes Professor Atiemo.

Religion matters, these experts say, because its resilience is proven, as is its positive influence on group and individual behaviour.

This is especially true for countries in Africa and elsewhere in the global South, including my own Ghana. For much of our history, religion has been a force for human dignity and social justice. Human rights collaboration with religion may be new to this generation of Northern rights activists, but it has long been commonplace in my country.

It was through grassroots ecumenical bodies such as the Local Councils of Churches, for example, that notions of male-female equality spread in Ghana. State and non-state agencies relied on these religious bodies and their networks to promote gender equality.

Discussion of the rights-religion link often focuses on great personalities, including Mahatma Gandhi, Martin Luther King Jr., or Desmond Tutu. Yet religious institutions and ideas are just as important.

Human rights collaboration with religion may be new to this generation of Northern rights activists, but it has long been commonplace in my country.

In the heat of my country’s 1981 military coup by the “revolutionary” Jerry Rawlings, for example, the new leaders effectively barred all political dissent. It was the leaders of these ecumenical bodies and their newspapers, the Christian Messenger and the Catholic Standard, who filled the gap, ensuring that a dissenting voice remained alive.

In the global North, many value the protections of international human rights law. In Africa and elsewhere in the global South, however, many of us rely on God’s protection, including His support for our basic human dignity.

Secular rights workers often accuse religious communities and actors of discrimination, exclusion, division, hatred, violence and intolerance. But the struggle against these ills has long been part of our religious tradition, and has a longer religious than secular pedigree.

Long before secular NGOs in Ghana ever thought of creating space for vulnerable persons such as the blind and the deaf, our Presbyterian and Methodist Churches established schools for the disabled in Akuapim and Wenchi. Working through women’s groups in Ghana’s churches, moreover, social activists drew attention to the cruel aspects of widowhood rites, pushing for reform and even abolition.

For the average Ghanaian, moreover, it is not easy to distinguish between religious and secular behaviours. Indeed, most people draw on their religious belief for strength and motivation in almost every aspect of their lives.

Despite all this, many human rights workers and scholars remain suspicious of religion. Recently, for example, both local and global human rights activists criticized religiously-inspired camps in Ghana for persons accused of witchcraft.

This attitude is wrong-headed. These camps provide refuge for vulnerable girls and women, many of which were attacked by village mobs. These prayer and healing camps also provide succour for psychiatric patients, who otherwise have limited access to mental health services.

The Ghanaian state is not able, or willing, to provide alternative support, and so these religious camps fulfill an important need. Human rights activists should view these camps with sympathy, rather than suspicion.

Human rights work is a networked enterprise in a globalized world, and developments in the more powerful global centres have impacts on actors in the periphery. And since Southern human rights projects are funded by Northern agencies, Southern NGOs often strain to resemble their Northern counterparts. As a result, the antireligious stance of Northern rights professionals increasingly influences their Southern colleagues.

Yet across much of the global South, human rights collaboration with religious communities and institutions is vital. It will give human rights projects greater local credibility, and will widen the public’s discussion of, and engagement with, human rights ideas. This greater engagement, in turn, will revitalize the humanistic dimensions of religion’s mission, as expressed through its humanitarian and social justice activities.

Of course, the dominance of religion in some societies also means that religion and its related phenomena, typically described as “culture,” “tradition” and “custom,” can become major sources of abuse.

Yet Southern societies have made, and continue to make, great progress towards reinterpreting, rearranging, disregarding or even discarding the more abusive aspects of religion.

Changes of this sort take time, but this is also true in the global North, where many religious groups still hold attitudes, and engage in behaviours, that cause real harm.

In Bavaria, for example, the Twelve Tribes Christian sect has repeatedly gotten into trouble with the police for its child-abusive doctrines and practices, while in the United States, many Christians remain faithful to biblical injunctions about corporal punishment for children. And religiously inspired discriminatory attitudes toward gays, lesbians and transgender persons persist among many religious denominations throughout Europe and the United States.

Collaboration between religion and human rights is the best way forward. In societies in which human dignity is often expressed through religion, it would be a mistake – and indeed a violation – to undermine or ignore faith.

Professor Abamfo Ofori Atiemo is Senior Lecturer and Head of Department for the Study of Religions at the University of Ghana in Legon, and author of Religion and the Inculturation of Human Rights in Ghana.