Social movements in Haiti are reimagining justice in order to fight back against exploitation by the mining industry. 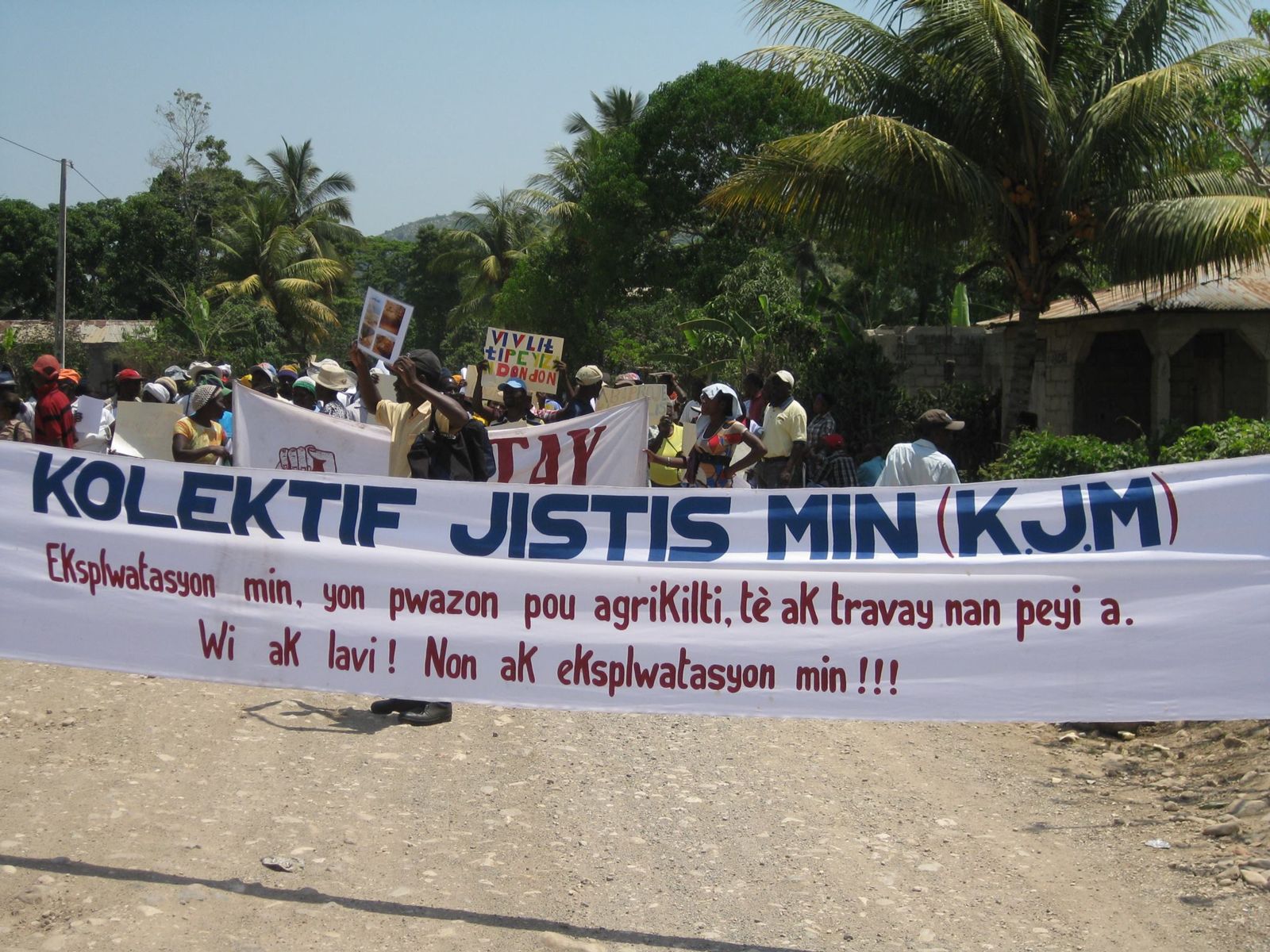 Inclusive efforts to empower communities to know and demand their rights are crucial in the context of an absent state.

Although there is no gold mining in Haiti today, the government has been encouraging investment in mining for gold and other metals for decades, prescribing it as necessary for economic development, with little consideration to the resulting exploitation of the people or environment. In our work as community organizers with the Kolektif Jistis Min (Mining Justice Collective or KJM), our primary goals have been to support rural, remote communities where mining activity has occurred—or is proposed to occur—to organize, to know their rights, and to work collectively to demand that they participate in decisions about their future.

Gold and human rights have long been part of Haiti’s history: the early colonizers stayed in part because the native Taíno were adorned with gold from the soil and rivers. The colonizers killed the Taíno and then brought workers from Africa to Haiti through the slave trade.  More than 300 years later, the slaves overthrew the French army to become the first black republic, and the only nation born of a successful slave revolt. Haiti’s creation—and the revolution that led to it—was founded on an early articulation of universal human rights.

Unfortunately, powerful countries collaborated to strangle the new Haitian State and its project of universal well-being.  Foreign powers propped up dictators and continue to interfere in Haitian politics in ways that hurt the poor majority.  To this day, the country has yet to have a government that respects, protects, and fulfills the human rights of its people.

Although the term legal empowerment has not yet become part of the language of the social movement in Haiti, the principles of popular education are key to efforts of resistance and preservation of the collective. In one of the most unequal countries in the world, people are too accustomed to exclusion—from schools, from the formal economy, from participating in politics, from even knowing their basic rights. Legal empowerment is fundamental to challenge this exclusion; people must have a basic understanding of their rights, and they must see themselves as agents rather than strictly victims. As Gandhi said, “Whatever you do for me but without me, you do against me.”

KJM uses the spiral method of popular education to practice inclusion, and to place the experiences of the oppressed at the center of our work. The spiral method has the following steps:

The spiral method has provided a powerful framework for KJM. In the north of Haiti, for example, KJM used the spiral method to unite a diverse collection of organizations in one community where a company holds a permit to construct a mine, also called an exploitation permit. The organizations—farmers’ unions, workers’ rights groups, Voudou priests, the Catholic church, local schools and hospitals, women’s rights groups—included a wide variety of people: women and men, those who can and cannot read, laborers, students, and more. After four consecutive meetings, the group had written an open letter to government officials, stating common concerns and denouncing the presence of metal mining in the area. The letter, dated May 2018, includes reference to the experiences of communities in Latin American and African countries with mining with multi-national mining companies. The group then delivered the letter to local authorities and worked with KJM to deliver the letter to government officials in the capital, an eight-hour bus ride away. The letter serves as a unifying declaration of community consensus, and the process of drafting it will guide future community decision-making, including the common demand to participate in decisions about mining activity.

To date, no government official has responded to the letter.

However, KJM and local organizations are accustomed to silence from the Haitian State. In 2015, KJM and the Global Justice Clinic testified to the lack of access of information in the context of mega-projects in Haiti at a thematic hearing before the Inter-American Commission on Human Rights. The Haitian government did not attend the hearing. KJM has made repeated requests to meet with members of Parliament that sit on the committee that oversees the mining sector. Parliamentarians have never responded.

The following proverb guides our engagement with the Haitian State: “When sharing food with the devil, eat with a long spoon.” KJM is measured in selecting advocacy tactics and making alliances; the government is not an ally but an unscrupulous actor that we must treat with caution.

Local, inclusive efforts to empower communities to know and demand their rights are crucial in the context of an absent state. Haitian communities are building their power, and making demands not only of the government, but of other relevant actors—for example, companies and international financial institutions (such as the World Bank supporting the redrafting of Haiti’s mining law). Legal empowerment is not only about concrete outcomes—preventing mineral extraction or preventing companies from operating in certain communities—it is also about process. As community members practice the spiral method, working together to articulate common problems and proposing common solutions, meanwhile reifying the local, specific knowledge that rural farmers hold, they become better equipped to confront injustice.

Although government authorities have not responded to the open letter, the act of its creation has supported—if not transformed—local organizing efforts. The struggle to assert community’s rights in the face of mining activity now includes many new organizations and individuals. Other communities that live within or in proximity to mining permits have recognized the letter as the product of a rare and important space of inclusion and common articulation of goals. More concretely, in the coming months, residents of the community in the North that drafted the open letter plan to visit Port-au-Prince to seek meetings with government officials and to hold a press conference to share what they learned or, more likely, to publicly denounce the government’s refusal to listen to the concerns of its citizens.

Mining projects around the world show that companies are often made rich while communities experience greater injustice and rights violations. Bryan Stevenson, founder of the Equal Justice initiative, has said that the opposite of poverty is not wealth but justice. KJM and other social movement organizations in Haiti are reimagining justice by making the concept accessible. Justice is not only fought for in court. Justice is about knowing our rights, learning how we may suffer the same rights violations as others, and working together to demand change.