Despite tension between western notions of individual freedom and Muslim tenets of communal responsibility, there is much common ground to be found in the fight against oppression and discrimination.

There is growing consensus in support of the UN Bill of Rights, whose fundamental principles are set forth in the Universal Declaration of Human Rights (UDHR), and further specified in subsequent UN treaties. Increasingly, the language of rights and the instruments of the international rights regime are employed – at both national and global levels – in response to oppression and discrimination. The rights-based approach to development has gained momentum as a concept that achieves synergy between human rights, democracy and development.

This support for human rights comes from people of various faiths, as well as nonbelievers. However, this backing is neither total nor unconditional, for there are significant constituencies that experience real tension between universal human rights and their own beliefs or way of life. This is most prominent with respect to religious groups – particularly Muslims.

Before beginning an analysis on the tense relationship between human rights and normative Islam, we would like to emphasise that we strongly believe there is much common ground between the two. In the current and dominant development paradigm, the economy is an overwhelming (if not the strongest) influence, and secularism leads some to believe, or interpret, that morality has little or no place in the public sphere.

Human rights discourse runs counter to this dogma and supports the position of Muslims and other faith-based groups, which places moral values and obligations at the centre of any political, economic, and social system. Thus, the global human rights framework conforms with Islam in its explicit commitment to the importance of morality in the public sphere, and to the values of compassion and social justice.

An even closer connection between the UDHR and Islam is the mutual recognition that respecting and fulfilling human rights is a means to upholding the dignity of human beings.  Both share the same objective of ensuring that everyone’s basic rights, irrespective of status, are protected.

At a doctrinal level, both Islam and the UN Bill of Rights are in agreement on human dignity as the foundation of human rights. However, for Muslims, this does not go far enough. In Islam, as in many faiths, the root of human rights lies within theology and begins with faith in God, who is the source of transcendent value. It is God who bestowed dignity on human kind (Qur’an 17:70) and who makes it unacceptable for anyone to violate human rights and take away a person’s dignity. Therefore, our conception of an individual’s rights will be in our relationship both with God as well as people within the community. This differs from the thrust of the UDHR, which appears to utilise a libertarian notion of an individual divorced from his/her social commitments and/or relationship with the collective.

In practice this has two implications. First, the belief that God is the source of human rights leads to the conceptualisation of the rights of others as obligations on all believers. In Muslim understanding, all deeds (including unfulfilled obligations) are recorded and weighed on the Day of Judgment. Second, these social obligations form both the rights of others and ultimately the rights of God over us, which are actually manifest to us indirectly through creation and society. This is amply explained in the saying of the Prophet Muhammad in Sahih Muslim Book 032, Hadith Number 6232, which illustrates that we fulfil our duties to God through granting the rights of others.

The Islamic paradigm, whilst often respected and admired by secular countries for its emphasis on social obligations, is contentious for the very reason that it is based on divinely revealed sources, the status of humans as being in servitude to God, and the omnipotence of a Divine authority that obliges obedience. This flies in the face of Western notions of the right to absolute freedom for the individual.

While the UDHR tends to place government as the primary guardian of human rights, Islam emphasises responsibility for all levels and individuals in society. The government, as the national representative of the human family, is the ultimate guarantor of protection and justice. But this does not abrogate or necessarily outweigh individual responsibility and the role of family, neighbours or the wider civil society. Many Muslim countries today have comparatively weak central government authority and capacity to provide both social welfare and justice. This is balanced at a local level by the strength of social obligations and understanding of rights within the wider family and community, which ensure that the poor are fed, the vulnerable protected, and the law generally respected. Therefore the government is not the first port of call but rather the ultimate guarantor of rights. The prophet Muhammad is reported to have said: The sultan (government) is the guardian of he who has no guardian.

A duty toward others

An example of the way rights and obligations are shared is the care for the elderly. The right to and cost of care in old age for the growing percentage of elderly people in Northern societies falls legally on the state as the principal duty-bearer in cases where support is required. In Muslim societies however, family members are perceived as the primary duty-bearers for care of their elderly parents, and parents in turn have responsibilities for their children’s emotional and physical care. 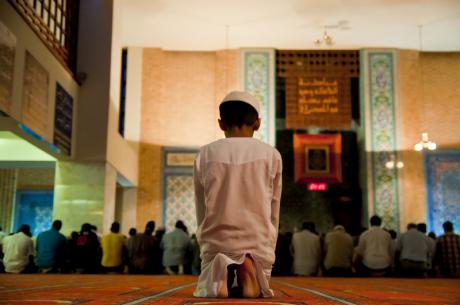 The growing emulation by developing nations of the dualist state-individual model of rights has very real threats for the stability and social health of these societies, which in most cases will be unable to deliver. Islam recognizes the need to ensure the development of socially responsible citizens fulfilling their role as complete, spiritually cognisant human beings with a duty of stewardship toward God’s creations (Khulafaa).

In summary therefore, according to Islamic teaching, rights are linked with a duty toward others. Muslim jurists have accordingly devised a rights framework that attempts to uphold and balance the common good and private interests of society. The framework envisages a continuum, with private rights (huquq al-ibad or al-nas) on the one end, and public interest (huquq Allah) on the other. Those in which both public and private interests are at stake fall in the middle.

A second level at which tensions manifest between Islam and human rights is in regards to certain provisions within Shari’ah law, which appear to be, or actually are, in contradiction with the human rights norms primarily led by Northern states. Non-Muslim human rights scholars have been critical of Muslim law in three broad areas, including perceptions that:

Some of these issues have received extensive discussion, clarification and reformulation. For example, slavery was a pre-Islamic institution in Arabia, and the coming of Islam not only moderated its practice but imposed conditions that encouraged its eradication. So while Islamic law did not ban slavery, it imposed conditions that will make it illegal to continue the practice in modern times (BBC).

Questions related to the status of women in political life also have been extensively debated. Denying women the right to become head of state is based on a particularly controversial Hadith (narration of the Prophet), and its interpretation and authenticity always has been contentious.

The Organisation of Islamic Countries’ (OIC) Cairo Plan of Action for Womensays that “women should be  respected, developed, empowered, considered full active participants in social, political, cultural and economic spheres.” A major objective of the action plan is to “eliminate all forms of discrimination including combating violence against women.” Such broad consensus from an organisation representing Islamic states was the result of strenuous efforts by Muslim women, feminists, and scholars of Islamic studies to arrive at contemporary interpretations of Shari’ah in order to promote greater equality and remove the vestiges of "discrimination."

Much of this discourse has taken the form of highlighting controversies that have always existed in certain interpretations of Muslim law, questioning the reliability of certain reports of the Prophet’s traditions, critically examining the (in)contestability of certain conclusions, and/or placing juristic rulings in their appropriate historical context.

Other aspects cannot be easily resolved by simple “my verse-against-yours” re-interpretations. Like many religions, foundational tenets remain problematic due to Muslims having reached a consensus around certain provisions in the Qur’ancenturies ago. Examples include female inheritance, Shari’ah punishments and polygamy. We take the view that even as these issues are resolvable, they cannot be resolved with secular theories or with arguments that the law – and thus religion – is “outdated.”

Instead, we argue for an approach that examines the Shari’ah from the perspective of its objectives (Maqasid) and seeks to identify in its rulings the purpose they serve, usually either the promotion of a positive good (Maslaha) or the elimination of corruption (Mafsadah) or both. Renowned Islamic scholars such as Jasser Auda and Hashim Kamali have extensively explored these issues and taken informed positions to resolve them.

The truth is the truth

The constant appraisal of changes to the context in which Muslims live has enabled Muslim scholars and societies to continually reassess the appropriateness of implementing Shari’ah using an ethical framework known as the “Maqasid al-Shari’ah” (underlying divine purpose of Islamic law).

Muslim societies thus have remained relevant, beneficial, and adaptive to societal changes. However, Muslims will distrust any interpretation that is not based on the primary sources of the Qur’an and Sunnah. Correspondingly, Muslims must also reject the notion of finding fault with something just because they believe it came from the West. The truth is the truth, no matter who proposes it.

Ultimately, Islamic law is a complete system that recognises an ideological framework of truth emerging from divine revelation. Freedom of thought, and of religious practice, is for the most part sanctioned and protected within Islamic law. There is recognition that diversity is part of human nature and that justice must prevail in order to protect individual rights, so long as it doesn’t encroach on the common good.

Muslim countries throughout the world have ratified international human rights covenants, and as a group their implementation of these is no better or worse than that of non-Muslim countries.

A cursory look at the 2014 Economic Freedom Index Heat Map shows remarkable similarities in the indices of neighbouring countries, and in the cases where neighbouring countries have significantly different indices, such countries are not necessarily adherents of different religions. Further, we undertook a preliminary analysis of the data that make up the map and found that there is no significant difference between the mean freedom index of OIC member countries from that of non-member countries.

This suggests to us that politics and culture, rather than religion, are the key determinants of human rights violations in the Muslim world and beyond.

On a wing and a prayer: can religion revive the rights movement?