Many human rights advocates work with people and/or communities who believe in a God or gods, but few are actually talking about the specifics of those beliefs. Understanding the people and communities with whom they work, however, is the foundation of effective human rights practice.

Growing up in a small upstate New York town, it was common knowledge that there were two things one didn't talk about in polite company: politics and religion. My family violated this rule constantly with respect to politics, and I grew up understanding that politics were a crucially important topic, rather than a forbidden one. This remains true in my intellectual and advocacy communities today, both in the United States and in Latin America, where I have done research and advocacy work for many years.

Religion, however, suffered a different fate, particularly in the human rights community. For most, it became the domain of the right – of regressive policies against abortion and contraception, against the LGBT community, against "non-traditional" families, against science. And, of the attempt to mix religion with politics, which was understood as an assault on the secular state. To the extent most human rights advocates have wanted to get behind religion, it has been to defend the freedom to practice the religion of one's choosing.

There are many good historical and political reasons for the human rights community to be wary about engagement with religious organizations and institutions. Some of these reasons are outlined in Nida Karmani’s discussion of the potential for damaging consequences, particularly for women and sexual and religious minorities. That said, organized religion has also played an important role over time in human rights advocacy, as discussed in Larry Cox’s post, which names figures such as Mahatma Gandhi, Martin Luther King, and Shirin Ebadi. To this list, I would add the many religious institutions and efforts that have been central to the human rights movement in Latin America, from religious organizations’ engagement with truth commissions, to the role of indigenous religious and spiritual practices in human rights advocacy, to the widespread influence of liberation theology on human rights and social movements across the region.

Pope Francis – the first Jesuit Pope as well as the first Pope from Latin America – has of course made the most headline-grabbing of these interventions recently, including supporting anti-fracking campaigns in Argentina, hosting a conference at the Vatican on Sustainable Humanity, Sustainable Nature, and just this month, hosting the Israeli and Palestinian presidents at the Vatican for a "prayer summit meeting". Human rights advocates’ responses to these initiatives and collaborations have largely been positive, seemingly indicating a move toward strategic engagement of religious organizations in advocacy campaigns. This openGlobalRights forum itself is a testament to the shift toward considering what “points of collaboration” there might be between religion and human rights.

That said, I would argue that the question of whether and how to strategically engage religion in human rights misses one of the most important reasons why religion should be a topic of conversation in the human rights movement. And that reason has very little to do with movement-wide strategy, and everything to do with on-the-ground efficacy.

At first, I considered this faith in God to be perhaps important personally to some of the displaced people with whom I was working, but peripheral to my own work. ... But increasingly, I noticed what a crucial role faith in God played in the very processes I was attempting to understand.

How many human rights advocates work with people and/or communities who believe in a God or gods? I would argue that they are many. How many human rights advocates (with a few important exceptions, including those dealing with religious war) are actually talking about the specifics of those beliefs? I would argue that they are few. This is a mistake, not only for strategic campaigns, but also for the extent to which advocates in such circles – be they believers or non-believers themselves – can understand and effectively work with people of faith. Understanding the people and communities with whom we work is the foundation of effective practice.

I conduct research in a region of Colombia where a significant percentage of the population has been displaced as a result of the internal armed conflict. Some families have lost multiple loved ones to murders, forced disappearances, and recruitment by armed groups. The state has made efforts to provide reparations and compensation for some of these losses in recent years. However, its own acts and omissions over the course of the conflict have engendered a lack of confidence on the part of much of the displaced population, particularly regarding the likelihood that the state will protect them from further harm or ensure their welfare. In the absence of confidence in the state, I have found that many people instead place their hopes for their lives and livelihoods elsewhere: in God.

At first, I considered this faith in God to be perhaps important personally to some of the displaced people with whom I was working, but peripheral to my own work. I was studying processes of displacement and dispossession, and whether or not people believed in God was their own business, not mine. But increasingly, I noticed what a crucial role faith in God played in the very processes I was attempting to understand. Displaced people attempting to reclaim their land – an often dangerous proposition in Colombia – explicitly called upon God to help them have strength, security, and material sustenance. When they were denied protection by state-sponsored bodyguards, they stated they would rely on God to keep them safe. When they did not have enough to feed their families or pay for their children's education, they asked God to provide for them, and thanked God when resources came their way. Some even held prayer sessions prior to my interviews with them, asking God to bless my work and the knowledge that it would produce, and to protect me from harm.

A few weeks ago, I attended a meeting of displaced people who were putting together a proposal for things they needed in the urban slum where they now live. An activist who had been working with them presented a list of needs: home improvements, a school, garbage collection, a health clinic, a library, a space for urban gardening. Was anything missing, he asked? One of the participants raised her hand. A chapel, she said. A place to go and pray. The activist said that he couldn't address this. That a chapel was a private thing, and we were talking about public things. The woman, chastened, said she hadn't known there was a difference, and apologized for mentioning it. The meeting proceeded, and the discussion of religion and the need for a place to practice it was off the table.

I, like many in my intellectual and human rights advocacy circles, do not identify as a person of faith. But I want to argue for the importance of talking about religion as part of advocacy work. Not just to defend the freedom to practice it, not just in the context of religious war, and not just because religious organizations might be strategic allies. But rather, because faith in a God or gods is often a crucial part of the social worlds in which we work. To understand these social worlds and effectively work with and within them, religion needs to be on the table as a topic of discussion, along with politics. To do so does not mean advocates must found their practice in religious principles, satisfy religious needs, or have faith themselves. But it does mean inquiring about, discussing, and attempting to understand the role that faith might play in the decisions, hopes, fears, and lives of the people with whom we work. This means going beyond an understandingof religion as institutions that might be rights violators or strategic partners, and beginning to think about the specifics of faith in the lives of people and communities, and how that might affect the potentialities and limits of our work with them. 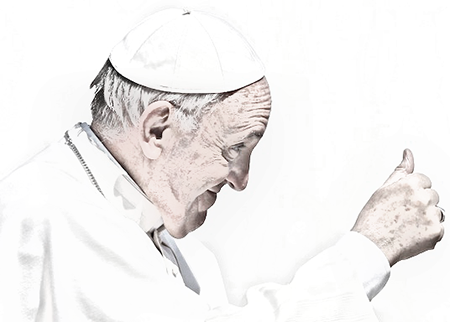 In the meantime, we can also go ahead and celebrate the “coolest Pope ever,” and hope that his efforts to combat climate change and move toward peace in Israel-Palestine are more successful than our world politicians' have been. That is – as the communities I work with would say – if God wills it so.

Meghan L. Morris is an Affiliated Researcher at Dejusticia, a human rights research center and human rights NGO based in Bogota, Colombia, and a Doctoral Candidate in the Department of Anthropology at the University of Chicago.