The Pope’s first official visit to Mexico was all talk and no action, but it was exactly what many Mexicans expected.

Filled with contradictions, Pope Francis’ first official visit to Mexico was disheartening in relation to the human rights situation that is taking place. But at the same time, anything else would have been totally out of character. Upon arriving to Mexico two weeks ago the Pope found a country immersed in a serious human rights crisis characterized by forced disappearances, femicide, racism and socioeconomic inequality. On top of all that, he faced multiple reports of pedophilia among Catholic priests in Oaxaca and Michoacán, among other places. As a Jesuit priest but also the ultimate hierarch of the Catholic Church, the Mexican people expected a lot, and many were disappointed.

Many Mexicans hoped that the Pope would take a clear stance politically about the human rights violations for three simple reasons: 1) the Compañía de Jesús (Society of Jesus) in Mexico and its social ministry organizations has headed the defense of human rights for decades; 2) the groups of victims and their families, many of them Catholic, requested that he intervene on their behalf in order to advance justice and to talk about the national mood; and 3) avoiding the crisis is essentially to avoid the country with the second largest number of Catholics in Latin America.

Many Mexicans hoped that the Pope would take a clear stance politically about human rights violations.

Indeed, shortly before arriving, and later on with the mediation of Mexican Jesuit priests, the family members of the 43 missing students from Ayotzinapa explicitly requested an audience. To their disappointment, Pope Francis refused the visit. At first his spokespeople said it was because there were divisions and interests between the different groups of victims, and then later they said that due to their large numbers he couldn’t receive them all. For his last Mass in Juarez City, he did offer a few seats for the families, but they turned down the invitation—not out of pride, but because they were seeking more than a mere visit—they wanted his solidarity. What they hoped for—and did not get—was an agreement to bring their demand for justice before the Mexican president and other indolent politicians.

The Pope was also not receptive to speaking out and condemning the hundreds of cases of rape and other sexual abuses committed by Catholic priests against girls and boys. He didn’t even bring it up in Morelia, home to the largest pedophile in Mexico and the founder of Legionarios de Cristo (Legion of Christ), Father Marcial Maciel. He also never made mention of the femicides and missing women despite having officiated Mass in Ecatepec, State of Mexico, the municipality with the most recurring cases of femicide in the country, replacing Juarez City. In regard to racism and the oppression of the indigenous people—one of the central focuses to the ministry in Liberation Theology, including the Jesuits’—Pope Francis prayed before the tomb of priest Samuel Ruiz, famous for assisting in both the indigenous and Zapatista causes, in San Cristóbal de las Casas, Chiapas. He also apologized to indigenous people because of their systematic exclusion. Still, he didn’t appear perturbed by the inequality symbolized by the welcoming committee of kneeling indigenous peoples with which the governor of Chiapas received him. 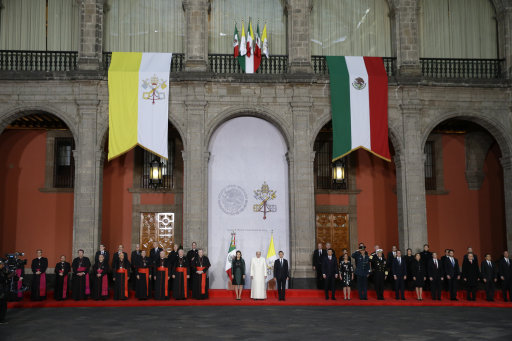 The boldest thing anyone heard from the Pope on the topic was in Juarez City was when he criticized the greed of businesses that exploit their employees and condemned them to hell. But these words had little effect in a city like Juarez, where work labor exploitation has become alarmingly commonplace, including femicide, kidnapping, extortion, forced disappearances, executions, and forced displacement of the poor and marginalized—violations the maquiladora industry left in its path before gradually leaving the country. Mexico needs far more from the Pope than spiritual condemnation of its undesirable elements.

Pope Francis defenders say that the fact that he chose these cities for his visit—Ecatepec, Morelia, San Cristóbal de las Casas, and Juarez City—is in itself an acknowledgement of the serious human rights crisis that is taking place in Mexico. Yet in his sermons he did not explicitly condemn the human rights violations that characterize this crisis: forced disappearances, femicide, racism, social inequality and pedophilia. His most radical action in that sense was to criticize the corruption of the political class and its role in the spread of drug trafficking and violence. But at the same time, he allowed a lavish reception and a millionaire’s worth of spending of public resources for a security detail fit for the president of the United States. The central-south of Mexico City was militarized and deadlocked during his five-day visit—many residents felt that they were under siege and that the number of heavily armed officers (estimated at 60,000) on the streets was unreasonable and downright scary. This fact, criticized widely on social media—which his advisors must surely go through—didn’t appear to affect any his plans, giving the impression that the discomfort of many Mexicans over the massive display of force didn’t really bother him. At the end of his tour, Pope Francis wore out a politically uninspiring and philanthropic agenda with a visit to the domesticated poor, romanticize, folklore-esque indigenous peoples, and cancer patients.

Today it is very clear that—despite accusations at the beginning of his tenure—Pope Francis was not one of the priests who collaborated with Argentina’s dictatorship, but it’s also evident that he was involved in some very questionable practices of the Catholic Church during that time. He was not one of those working in the chabolas or villas de miseria (shantytowns or slums), assisting the dispossessed in the organization for their rights. Yes: Pope Francis is a Jesuit. Yes, he lives with greater modesty than his predecessors. But he is not the kind of person who professes to the praxis of the preferential option for the poor, nor one who intervenes for their rights. His visit revealed a lot about his stance on human rights and how symbolic his influence really is. He didn’t meet with victims of human rights abuses, and he only met with the sick and the poor that the Mexican government wanted him to see. There were many things he could have done—but didn’t—in Mexico. In this regard, Pope Francis demonstrated exactly who he is. At least he was consistent.