Bangladeshi activists work around religious elements, sometimes even collaborating with them. The rise of religious groups, however, is becoming both a challenge and a threat.

The recent spate of gruesome killings of bloggers critical of Islam—Bangladesh’s state religion—is a timely reminder of the potential perils that rights and development activists face in this country as they navigate an increasingly intolerant and more hazardous landscape.

In just over a month, two bloggers were hacked to death in public places, following three similar attacks in 2013, in which one blogger died. A decade back, a famous author also fell victim to a similar attack for his critical views on Islam. Indeed, over the last decade, Bangladesh saw a rise in the number of large and small militant Islamist organizations, who carried out explosives attacks on courts and at cultural events around the country.

And yet, in the decade before this shift into darker terrain, Bangladesh could have staked a claim as the poster child for a relatively tolerant and pluralistic society among majority Muslim countries in the world. The country has enjoyed democratically elected governments headed by women for 22 of the last 24 years. This is home to Nobel prize-winning Grameen Bank, which provides microcredit to more than seven million rural Bangladeshis, 97%of whom are women. It is also the second-largest ready-made garment exporter in the world, an industry that employs 80% women. 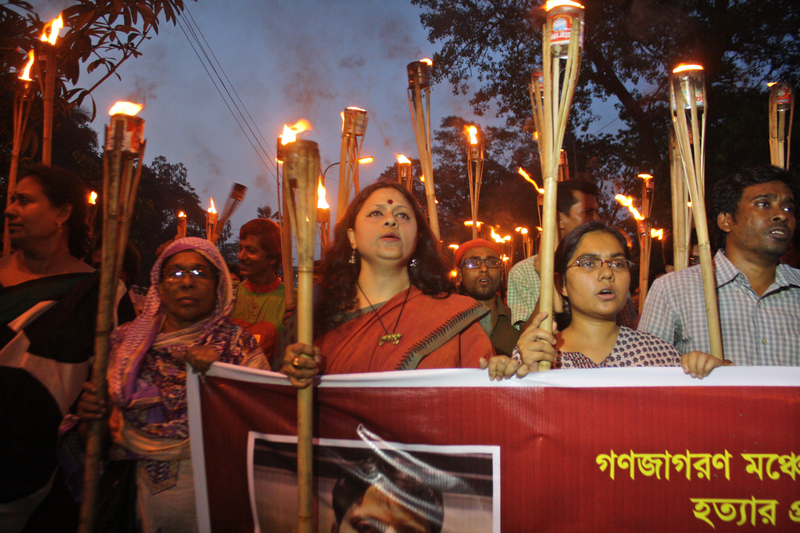 The country has more than 2,300 non-government organizations registered with the NGO Bureau and around 100,000 organizationsworking in the development and rights field, dealing with issues such as women’s rights, family planning and minority rights. Foremost among them is BRAC, the world’s largest NGO.

It would be difficult to point to instances of religious leaders playing an active role in upholding rights. However, Sara Hossain, honorary director of Bangladesh Legal Aid Services Trust, observes that clerics(who sometimes act as community leaders) have successfully served as instruments in the implementation of numerous projects, especially development projects.

One such project was the family planning program actively pursued by the government since the 1970s in one of the most densely populated countries in the world—160 million people over 147,570 km. Successive governments implemented a birth control policy which saw fertility rates fall to 2.3 children per woman in 2011 from 6.94 in 1971, the year of the country’s birth. Among many actors who contributed to this drop through awareness-raising were local imams and muezzins, incorporated into the program by the Ministry of Religious Affairs. By all measures, it was an astounding achievement given the religious group’s natural aversion to birth control. What seems to have worked in this instance is that unlike Catholicism, Islam’s position on birth control is more fluid, allowing the government and activists space to work around an otherwise sensitive issue.

Contrasting that are cases where human rights activism directly conflicts with clear religious edicts, and in these instances cooperation is usually a non-starter. A case in point was the long-awaited 2011 Women Development Policy outlining a number of steps to improve the situation of women in politics, education and other areas: it left out a critical equal inheritance right, much to the chagrin of women’s rights activists. When activists raised issue with this conspicuous absence, a minister is said to have quipped, “when you can get the numbers on the streets like the clerics can, we will also give you what you want.” On the other hand, the Prime Minister called a special meeting with leaders of the clerical community to assure them that the policy did not contain anything against Islam, after rumblings of discontent reached the government’s trepid ears.

While successful coexistence and cooperation between rights activists and religious groups can be traced back many years, a conflicting relationship has recently become the norm.

While successful coexistence and cooperation between rights activists and religious groups can be traced back many years, a conflicting relationship has recently become the norm. Religion no longer seems to be only a question of belief, but also one of organized politics—a view espoused by Ms. Hossain. Over the last decade and a half, religious leaders and their followers have organized themselves as pressure groups and militant organizations, employing many of the same methods of organization and dissemination used by rights and development activists. While state organs, cultural organizations, the media and certain individuals have so far been their targets, activists are in constant fear of straying into their path.

For a country that has made impressive strides in the fields of health, education and the employment of women in its first four decades, it would be a sad outcome indeed if rights and development work were to clash against growing intolerance and religious extremism. After all, Bangladesh is among the few Muslim majority countries with secularism written into its constitution.

One way to avoid this outcome would be to stop taking up language or positions that could directly flare up religious sentiments. After all, these sentiments still have a monopoly over people’s sympathy in Bangladesh, as opposed to values associated with global human rights. For example, while the success of family planning has made abortions a fairly acceptable and prevalent phenomenon in the country, field workers are often the first ones to resist proposals advocating for broader legal coverage on abortion. If they did so, it would invariably set back their successes and turn them into targets of religious groups.

However, the risk here is that activists will get too cautious and fail to take a stand on issues that really matter. In the end, the challenge that rights activists now face is finding that balance between accommodating religion—or at least not aggravating religious groups—staying safe, and standing up for human rights.