Using extreme examples to justify a purely secular human rights approach does a disservice to the many religious leaders doing progressive work.

Many contributors to openGlobalRights, including Achieng Maureen Akena and Karoline Kamel, have argued strongly that religion and human rights should not be mixed. These two authors in particular agree that the only appropriate approach for human rights promotion is a purely secular one. But this angle is based on picking out only fundamentalist examples to support their point of view, which is misleading and harmful to the entire discourse on religion and human rights.

In many African communities, human rights make their strongest showing as constitutional and legal standards with which most ordinary citizens are only vaguely familiar. While the law might deter some would-be violators, it is not able to explain or inspire ethical behavior that respects human rights on a daily basis. The law is even less effective when it is perceived as sinful, unethical or the imposition of an alien culture. Religion may not be the only avenue for a richer human rights and ethical discourse in Africa, but in a region with high levels of religiosity, it is certainly an important one.

Akena and Kamel’s arguments that human rights suffer when mixed with religion is partially supported by empirical data, some of which are pointed out in their articles. The problem with this position, however, is that it depends on an essentialized version of religion that does not portray what religious discourse on human rights actually looks and sounds like. In order to argue that religious discourse is harmful, both authors take fundamentalist expressions as the only legitimate expression of religion.

To contend that religion does not support human rights ignores the fact that the natural rights tradition itself emerged from Christian ethics and twelfth century canon law. The American Constitution was influenced by Protestant ethics as much as it was influenced by enlightenment philosophy. One could not imagine human rights and social activism in South America without liberation theology; the fall of communism without the impact of the Second Vatican Council; or the American civil rights movement without Black Liberation Theology or the Nation of Islam. As far as religious discourse on human rights goes, the list is long and stretches from the likes of critical theory of religion and queer theology to the radical conservative ideologies described by Akena and Kamel. To pick only from the most extreme end of the religious spectrum is biased and highly unjustified. 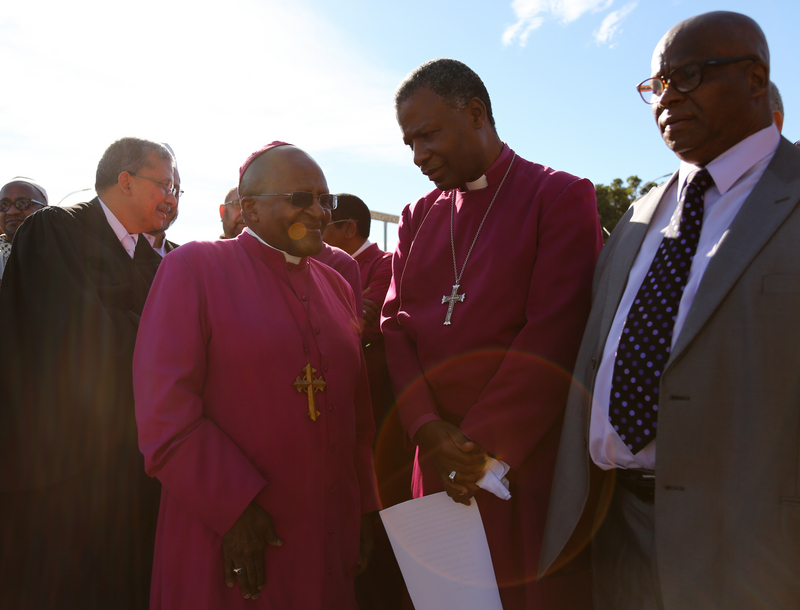 South African Bishop Emeritus Desmond Tutu has long served as an example of how religion can be an ally to the human rights cause.

Kamel, for example, argues that the discrimination against Egyptian Copts and the actions of some radical Salafi preachers is evidence that human rights discourse needs to be secular. What she does not point out, however, is that the Egyptian radicals and the state have also been persecuting Muslim scholars such as Nasr Hamid Abu Zayd for arguing in support of human rights on a religious basis. Kamel also does not mention the wasatiyya movement of Egypt or the youth movement within the Muslim Brotherhood, which are quite politically progressive, especially with regards to minority rights, women’s rights, human rights and democracy in general. Akena also points out that the Ethiopian state (pretty much a Marxist-Leninist regime) has been violently suppressing Muslim protests without mentioning that these protests were led by scholars and Imams calling for secularism and human rights in Ethiopia.

While every example showing that religion is inimical to human rights can be met with a counter-example, my point is that when it comes to religion and rights there simply isn’t one right answer.

African history is replete with examples of how religion has mobilized ethical disgust against human rights violations and rallied millions against repressive regimes. For example, the South African Council of Churches played a pivotal role in the international divestment/sanctions movement, in marshaling moral outrage against apartheid by announcing it to be a sin and a heresy, and organizing marches and protests. In Ghana, the Calvary Methodist Church and the Christian Council were at the forefront of not only protesting painful structural adjustment plans but also challenging the moral legitimacy of dictatorship. Nigeria’s Council of Ulema and its Christian counterparts played a seminal role in opposing human rights violations during the dictatorial era. Many other religious organizations, such as the Nasr Allah al-Fatih Society of Nigeria, have been playing a significant role in preventing communal violence. And despite many arguments about religion and homophobia, Archbishop Desmond Tutu has become an LGBTI rights advocate of global significance.

While every example showing that religion is inimical to human rights can be met with a counterexample, my point is that when it comes to religion and rights there simply isn’t one right answer. The Dutch Reformed Church of South Africa, for example, initially supported apartheid on a theological basis, and then “repented” and announced that apartheid was sinful and an insult to human dignity. We must see the diversity and nuances of this debate—and the constant evolution of religious bodies—to properly understand it.

Finally, to contend that the fundamentalist versions of religion are the legitimate representations of religious discourse is not only misleading, it is irresponsible. To present fundamentalist or homophobic views is only helping extremists by repeating their views and giving them a greater audience. Secular human rights advocates should not inadvertently amplify and support those who are working to convince their followers that God wants us to hate. African activists such as Archbishop Desmond Tutu and Abdullahi An-Naim, dismayed that their God is being used to justify human suffering, have set out to contest these intolerant narratives and promote human rights in indigenous discourses. Those of us who do not need religious reasoning to uphold rights should either support these leaders from a distance, or stand aside so they can do their work.

Abadir M. Ibrahim has a JSD from St. Thomas University School of Law. He lectures in the areas of human rights law and human rights and religion. He is an African/Ethiopian human rights activist who represents victims of human rights violations at the African Commission on Human and Peoples’ Rights and the United Nations Human Rights Council.