A deeper history of social rights can help us identify the factors that have impeded the human rights project. 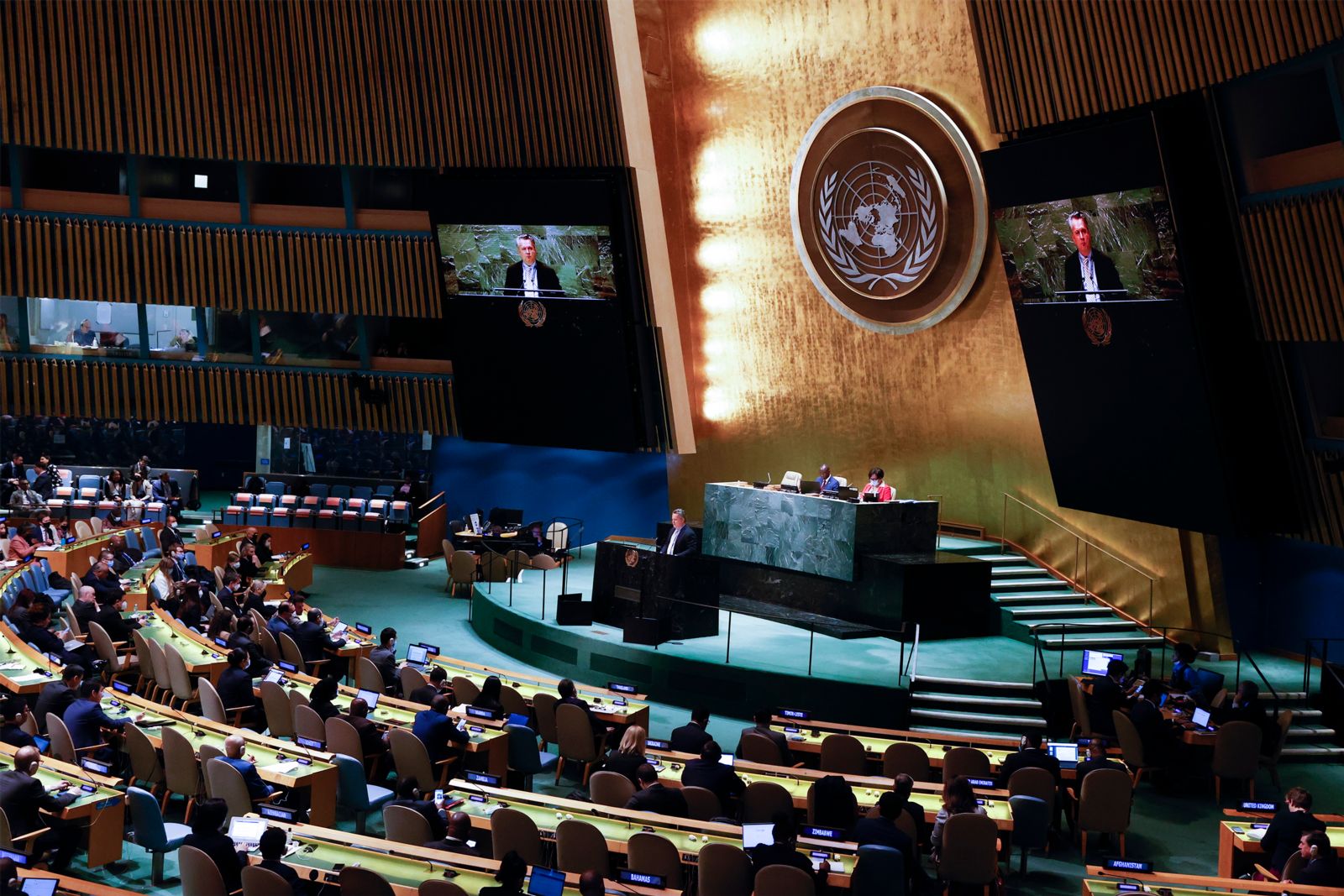 Ukraine's Ambassador to the U.N. Sergiy Kyslytsya addresses the United Nations General Assembly meeting where member countries are scheduled to vote whether to suspend Russia from the Human Rights Council caused by Russia's invasion of Ukraine at United Nations headquarters in New York, in April 2022. EFE/EPA/JASON SZENES

Social and economic rights—social rights for short—were never “second-generation rights.” Since the 1970s, it has been widely assumed that social rights (such as the right to food, work, education, and healthcare) emerged in the 20th century, as socialist additions to liberal “first generation” civil and political rights of the Enlightenment and Age of Revolutions. The persistence of this flawed chronology has obscured a much deeper history, one that the new book Social Rights and the Politics of Obligation in History explores.

To illuminate the challenges to realizing social rights across the centuries and across the globe, the volume focuses on the struggles over determining the duty bearers for these rights and the means by which these rights were to be implemented. These “politics of obligation” changed substantially over time.

In late medieval and early modern Europe, the poor were legally entitled to social assistance. Although the term ‘charity’ was used to describe this assistance, the obligation to be charitable was not just moral but legal as well, and courts enforced these laws.

The advent of principles of freedom, equality, national sovereignty, and international law in the modern era disrupted these older patterns of social rights and obligation. Surprisingly, it was the Enlightenment advocates of a free-market society – the French Physiocrats – who first articulated social rights in a constitutional idiom.

These political economists and their French revolutionary followers believed that social rights would be achieved once property was freed from the inefficiencies of feudal obligations and monopolistic privileges. Because the economy would grow, they argued, workers would have jobs, food, and general well-being. Those unable to work due to age or infirmities might still receive charity, but charity was now to be freely given and no longer a legal duty. In this new world of individual freedom, the voluntary means of markets and philanthropy would secure social rights.

Rather than grow, however, the French revolutionary economy crashed. By 1793, Jacobin revolutionaries opened up the possibility—highly contested and unevenly implemented—that the state would provide the means of well-being. But this necessitated taxes and market regulations, which many viewed as a threat to property rights. Violent struggles over property, taxes, and redistribution followed, enflaming the politics of the Revolution’s ‘terror’ phase.

In the aftermath, both liberals and radicals of the 19th century turned their backs on social rights. Liberals either clung to their faith in free markets (supplemented by philanthropy) or they conceded that the state might provide assistance but only as a matter of discretionary policy, not as a matter of constitutional right.

Meanwhile, socialists either dismissed human rights altogether as the claptrap of the capitalist bourgeoisie or, like the Physiocrats a century before, persuaded themselves that social rights would be achieved once societal institutions were grounded in the right principles—in this case, reciprocity and solidarity rather than private property and market competition.

The revival of social rights by the turn of the 20th century owed to liberals finally conceding that the state owed individuals well-being as a right and to socialists and organized labor finally trusting the state to guarantee it. Such a consensus emerged on social rights that even totalitarian regimes, such as the USSR, felt obliged to recognize them.

Yet, even as this consensus formed, older views persisted, chipping away at it. Some continued to insist that markets were more effective than states in ensuring well-being. Others believed that democratizing economic power would go further than the social state to mitigate the inequalities produced by capitalism.

In other contexts, social rights have reinforced social differences, as in mid 20th-century France or Japan, where husbands and fathers received special compensation that was denied women, who were expected to stay at home. One can sympathize with social rights while nevertheless acknowledging their potential to perpetuate, or even exacerbate, unequal power relationships. In short, the way social rights are implemented matters.

Social rights were an integral part of the internationalization of the human rights project after the Second World War. Their meanings were contested but the 1948 Universal Declaration brought a measure of definitional clarity, linking them more firmly to the principle of non-discrimination. In this context, social rights helped advance work on civil and political rights and were clearly beneficial to the evolution of the larger international human rights framework.

One can sympathize with social rights while nevertheless acknowledging their potential to perpetuate, or even exacerbate, unequal power relationships. In short, the way social rights are implemented matters.

Our volume examines global ideological divergences over social rights in the postwar period. It also examines how the politics of obligation began playing out on the international level. For example, the case of African inhabitants of the United Nations trust territories petitioning  to the UN Trusteeship Council in 1950s, seeking protection of their lands and livelihoods against the predations of colonial powers, illustrates the internationalization of struggles over social rights and the nature of state obligations in the context of late colonial rule.

And indeed, the post-1945 story of social rights very much hinges on the question of decolonization and its aftermath. With decolonization, former colonial powers could dodge responsibility for the extreme inequalities they had created in their former colonies and hand over neglected responsibilities for human rights to the new independent nations.

Yet, the leaders of these new nations used their sovereignty to push state-developmentalist agendas and avoid scrutiny for a broad range of human rights violations. In this sense, decolonization proved to be the perfect storm for denying social rights. This was the sad context in which human rights entered the 1970s.

A deeper history of social rights can help us identify the factors that have impeded the human rights project. It attunes us to the importance of social obligation. Understanding the politics surrounding obligation throughout history can help us better calibrate our human rights discourse for an age of climate change, pandemics, and increasing global inequalities.

At its core, Social Rights and the Politics of Obligation in History shows that social rights have always been important to the story of human rights and why there are wider research and practice agendas to develop. Most importantly, it calls upon us to recenter social rights in the global human rights imagination.

Charles and Steven are co-editors of Social Rights and the Politics of Obligation in History.