While the progressive Catholic Church is on the frontline of defending human rights in Latin American, its conservative branch still attacks reproductive rights and sexual diversity. How do rights activists engage with religion to reconcile this conflict?

Activists frequently refer to the theological work of Fray Bartolomé de las Casas, Francisco de Vitoria and even Fray Matías de Córdova, but it was liberation theologians such as Ignacio Ellacuría that served as the true inspiration for the region’s human rights movement. Even today, liberation theology continues to be a major influence on grassroots human rights defenders. This comes at a time when national NGOs have become small bureaucracies dedicated to lobbying political elites, and certain segments within the human rights sector oppose women’s reproductive rights based on conservative Catholic understandings of the right to life. 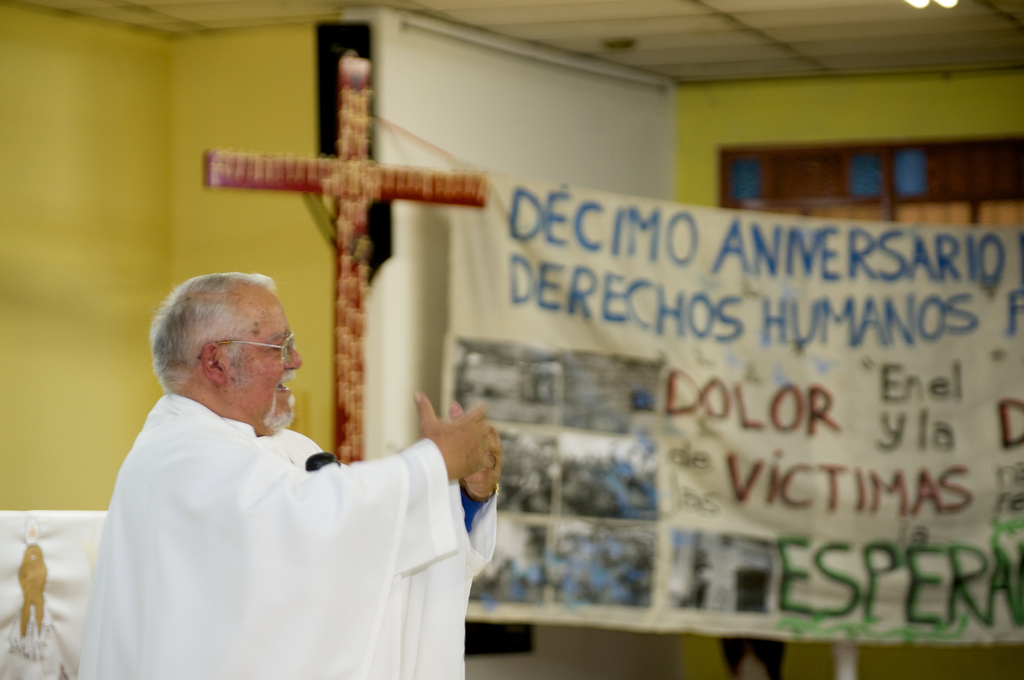 There is a strong religious influence in Latin American human rights, but this does not really come from scholastic thought so much as from progressive the Catholic Church

Catholic and Secular NGOs in Mexico

In the early stages of the Mexican human rights movement, liberation theology was very influential despite the fact that the framework was not naturally linked to democracy. As a result of the generalised repression and violence that extended throughout Central and South America, supporters of liberation theology used human rights discourse to search for the disappeared and defend those tortured and arbitrarily detained under the regimes of the national security doctrine of Chile, Paraguay, Brazil, Uruguay, Argentina and Bolivia). Scholars consequently became more receptive: Ellacuría in particular advanced the idea of human rights as the “rights of the poor”, following the liberation argument of “God’s preferential option for the poor”.

In Mexico, a hybrid view of human rights—mixing liberation theology ideas of social justice with the transition to democracy—established that violations of civil and political rights (torture, assassinations, arbitrary detentions and forced disappearances) were the obvious expressions of widespread violations of economic, social and cultural rights. However, the primacy of the “transition to democracy” in the 1990s soon converted economic and social rights into nothing more than a secondary goal. By the following decade, as Barbara Frey indicates, the  entire Mexican human rights movement became obsessed with reproducing itself as a bureaucracy and abandoned its original goal of social justice.

Today, the difference between secular and Catholic organizations, especially local ones, is that the latter are in touch with the suffering of the people, and the former are not. For Mexican human rights NGOs, the use of data and legal minutiae has replaced politics. Torture and massacres are widespread throughout Mexico, and women, migrants, children and journalists are the targets of both organized crime and corrupt law enforcement officials. But many human rights NGOs focus too heavily on the construction of indicators and political lobbying while competing for international funding.

In other words, secular national NGOs do not work with victims as much as they did before the 1990s, and the work they do no longer alleviates suffering as much it helps the government administrate it. The NGO idea of justice has become managerial: how many victims? How do we measure violence against women? What are the indicators for the right not to be tortured?

For Mexican human rights NGOs, the use of data and legal minutiae has replaced politics

Again, it is the grassroots organizations, many of them linked to the progressive Catholic Church, that are on the frontlines defending the “rights of the poor”. For instance, local NGOs such as CADHAC, headed by sister Consuelo Morales, are the ones helping relatives of the forcibly disappeared at the grassroots level. The “Miguel Agustín Pro Juárez” Human Rights Centre—linked to the Society of Jesus—is one of the few national NGOs still providing legal aid and political partnerships for cases such as opposition to mining, hydroelectric projects and other similar “development” projects on the land of indigenous people.

Another example is the organizations that help Central American migrants passing through Mexico en route to the USA. According to Mariana Celorio, even though more than half the human rights organizations specializing in migrants’ rights are non-religious, most of the organizations providing shelter, legal aid and humanitarian help—that is, those that move beyond press releases and reports or workshops for migration officers—are linked to Catholic social teaching.

While it is true that the praxis of the progressive Catholic Church has always been at the centre of human rights activism in Mexico and Latin America, its conservative sector has also exercised a pervasive influence. To be more specific, a very conservative wing of the Catholic Church opposes women’s reproductive rights, a stance reflected in certain segments of the Latin American human rights sector, especially the government.

Lynn M. Morgan claims that, with the help of conservative human rights scholars, the conservative Church in Argentina has adopted human rights language to advance a pro-life agenda. One example of this is the awarding of the Rosa Parks prize to Liliana Negre de Alonso, a conservative senator who systematically opposes women’s reproductive rights and prevents Argentina from attending CEDAW (Convention on the Elimination of All Forms of Discrimination against Women) meetings. Senator Negre has said that “the struggle against abortion is a matter of human rights”, and frequently refers to international human rights covenants.

In Mexico, the pro-life human rights agenda is also gaining ground: in 2007 the National Human Rights Commission (CNDH), which is supposed to ensure that government policies are consistent with human rights standards, challenged the constitutionality of a law to decriminalize abortion in Mexico City. The CNDH’s position on abortion has become a problem for women’s rights NGOs—both Catholic and civil—that oppose the conservative trend in certain states to criminalize women who terminate their pregnancies or who miscarry. In 2010, women’s groups campaigned against the incarceration of six indigenous women accused of murder for having had miscarriages or abortions.  Although the ombudsman’s opinion usually legitimizes such demands, the CNDH said and did nothing.

None of this should come as a surprise, since conflict is the nature of human rights discourse itself. Human rights, after all, represent a site for struggle, for disputing power and fixing meanings. Given the strong influence of religion in Latin America, it is inevitable that Catholic discourses will clash with human rights discourse. But as human rights activists, it is our job to engage with these disputes and advocate for the powerless, regardless of what theology might say.