Most Israeli Jews support the Gaza war, but the justice of self-defense has created a spiritual myopia among my people. As community and religious leaders, we rabbis must teach Jewish sources prohibiting the harming of innocents.

Support among Israeli Jews for the Gaza war is over 90%, chiefly due to Hamas’ barrage of rockets and attempts to murder and kidnap Israeli civilians via underground tunnels.

Yet Israeli Jews have fallen into a spiritual myopia that is just as bad as the one afflicting those who refuse to condemn Hamas’ actions. We in the Israeli human rights community condemn the targeting or disproportional harm to either Israeli or Palestinian non-combatants. I believe that Israel has a right to defend herself, but red lines must be respected. Furthermore, as an Israeli rabbi, I must say this loud and clear: my country’s attitude towards the killing of Palestinian civilians is deeply troubling.

Those of us who try to argue for a “sane” middle position are often called traitors. I am attacked by those who do not criticize Hamas’ tactics, as well as by those who say I am "shooting Israeli soldiers in the back". Most Israelis want to first avoid being killed, but also do not want to kill others. Why, then, is Israel causing so much death, injury and homelessness among Gaza’s civilians?

Israelis deal with the contradiction between their unconditional support for the war and saying that they wish Gazans no harm by saying that they are heartbroken by the death of innocent civilians, but that Hamas is to blame. “They started it," Israelis say. “They use their people as human shields.”

Indeed, many Israelis have begun to argue that the Palestinian civilians who voted for Hamas are legitimate targets. Sadly, some rabbis even desecrate God's Name by sanctioning this unjustifiable equation of civilians with combatants.

Consider these examples: citing Simeon and Levy’s Biblical massacre of non-Jewish Caananites for raping their sister, Rabbi Dov Lior—a religious leader living in a West Bank settlement—wrote two weeks ago that Israeli military commanders may punish Palestinian civilians and destroy Gaza entirely. But what Rabbi Lior fails to acknowledge is that in that same Biblical story, Jacob—Jewish forefather and parent to Simeon and Levy—rebuked their violence, saying, "[t]heir weapons are tools of lawlessness…Cursed be their anger so fierce, and their wrath so relentless."

Another popular rabbi, Shlomo Aviner, recently wrote on his Facebook pagethat while it is normally wrong to harm an innocent Arab for another’s sin,  "war is war", citing the Allies’ bombardment of Berlin during the second world war. Theoretically, he says, Israeli soldiers should refrain from endangering civilians. But not when “terrorists hide among civilian populations”.

Or consider Rabbi Yisrael Rosen, who writes that those who murdered the Palestinian boy, Mohammed Abu-Khadir (may his memory be blessed- z"l) are more despicable than the murderer of the former Israeli prime minister, Yitzhak Rabin (may his memory be blessed - z"l). However, Rosen also cites the 11thcentury Torah commentator Rashi on starving an enemy population to death, and advocates making Gazans suffer until they turn on Hamas. Better we should harm civilians than risk our own soldiers. We must fight Hamas the way they fight. 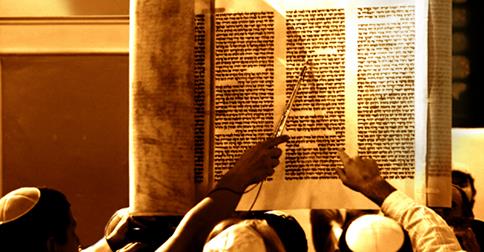 Members of a Jewish Temple study the Torah.

If these rabbis had no influence, there would be no pressing need to respond. They do, however, and we must speak out. During the 2008-09 Gaza war, for example, the army rabbinate distributed a pamphlet to soldiers praising revenge and mercilessness. My organization, Rabbis for Human Rights, was an important part of the public outcry against this policy.

One of our members, Rabbi Yehiel Grenimann, says quite simply that calling for the death of innocent Gazans is a desecration of God's Name. He recalls the words of [former chief] Rabbi Kook, who said that Jewish law should never be distorted to justify that which contradicts “natural morality”. Grenimann also argues that we Jews, who have suffered so much throughout history, ”cannot allow such ideas to cross our lips.” As part of the "Tag Meir" coalition, we have been asking people to write Israel's chief rabbis, requesting that they publicly decry these desecrations of Judaism. Our colleagues in Truah, an American rabbinical group similar to ours, have issued a similar statement.

To justify his radical views on Gazan civilians, Rabbi Yisrael Rosen cites the rabbinic axiom, “If somebody is coming to kill you, get up earlier and kill them first.” The same claim appears in the Talmud, an important Jewish holy book, and every Jewish Israeli schoolchild is familiar with the statement. Few, however, know what follows: the Talmud does order us to kill the rodef—the person pursuing another with the intent of murder—only if there is no other, less lethal way. If one kills the rodef even though one could have used other means, one becomes a murderer oneself.

We Israelis once believed in "Purity of Arms." This exacted a terrible price, because many soldiers died rather than harm civilians. Today, many say this concept is not Jewish. However, the Talmud next recounts that a man asked one of the rabbis (Rabbah) what to do when the strong man in his village says that he will kill him if he doesn't kill an innocent third person. Rabbah would have had no problem permitting self-defense, but regarding the innocent third person, he replies "Let yourself be killed, rather than kill. Who says your blood is redder than his?"

A section of the Talmud, (Sanhedrin 72a-74a), suggests three tests for even the most legitimate of military goals:

After the fighting, as the side with overwhelmingly greater power, we must ask whether ending the occupation and the blockade of Gaza might break the cycle of violence.

Rabbis for Human Rights recently sparked an intense Facebook discussion by posting a quote from Abraham's Biblical debate with God over his decision to destroy Sodom and Gomorrah, as its people were evil. Abraham, appalled at the impending destruction, asks God, "Will you destroy the righteous [along with] the wicked?" (Genesis 18:23) God agrees to spare the cities if they contain at least ten righteous people, but since none can be found, God proceeds with the destruction. God wanted Abraham to argue with him, however, to display his capacity for moral reasoning, questioning and compassion.

Rabbis must not be cheerleaders for war's logic

When Hamas rockets are falling and Israel must decide how many non-combatants to endanger in Gaza to protect our own civilians, we are all losers. There will be grieving loved ones on one side, or on both. But even without clear and simple answers, we need more Abrahams. We need more people to force our military commanders and government ministers to engage the public in debate about the use of force and its limits.

Rabbis must not be cheerleaders for war's logic. Rather, we must advocate for the innocent on all sides, so that they are not swept away with the guilty. Like Abraham, we must argue tenaciously with the powers-that-be.