Religion may help to control behavior and justify human worth and dignity, but in Nigeria, the co-existence of Sharia law with English Common Law has had serious human rights implications. Nigeria is now a prime example of why we must keep religion out of the law.

Without doubt, religion is an important value system influencing the general attitude, behavior, and ethos of any given people or culture. Since most of the world’s religions teach love, tolerance, and peace, religion can help to control behavior and give meaning to people’s lives. In fact, Daniel Philpott recently argued that without God, there is no real justification that humans are unique and inherently worthy of respect and dignity, concepts that are at the very core of human rights. Similarly, Larry Cox points out that human rights and religion often converge because of their shared belief in protecting human life and dignity. In Nigeria, however, allowing religion to influence the law has often achieved quite the opposite.

Nigeria is a prime example of how religion’s impact on lawmaking can impede equality and peaceful co-existence, and can even hamper economic and technological development. As Africa’s most populous country, Nigeria is approximately 50 percent Muslim and 48 percent Christian, with the remainder holding indigenous beliefs. This pluralism has had serious implications for using religion as the basis for human rights or any other sort of law. Nigeria’s legal system is complicated by the fact that Islamic or Sharia law co-exist with English Common law, a result of the significant influence that religion had on the 1999 Nigerian Constitution.

While the foundation of human value and dignity may be found in religion, patriarchy is also deeply rooted in many religious tenets. Christianity and Islam, especially in fundamentalist forms, are both known for their unequal treatment of the sexes. Indeed, in the orthodox and traditional Christian religions, the role that women can play within the Church is limited and controlled, as they are frequently excluded from leadership and other powerful positions. For example, in the Catholic Church, women can be nuns but never priests or bishops, and they are not allowed to conduct Mass (religious worship). In Islam as well, there is an ongoing debate on whether or not women can be imams. Even in traditional African religions, women are excluded from performing important religious functions such as pouring libation or any form of invocation of the spirits for blessing or protection. 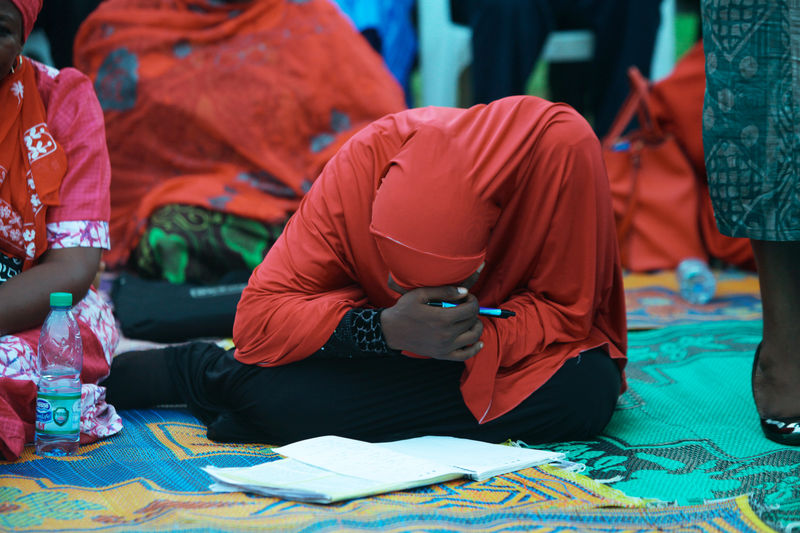 The Bring Back Our Girls campaign continues in Abuja, Nigeria. A woman mourns during a recent town hall meeting.

In Northern and Southwestern Nigeria, Islam is so widely practiced that the Sharia legal code has been officially adopted by five states in Northern Nigeria. The entire Sharia system has had negative human rights impacts, not least of which is the sanction of child marriages. This practice clearly violates multiple human rights charters, including the African Charter on the Rights and Welfare of the Child, as well as the Protocol on the Rights of Women in the African Charter on Human and Peoples’ Rights.

In fact in 2013, during the constitutional review process in Nigeria, the biggest debate surrounded the legal age of marriage. The controversy erupted because section 29(4)(b) of the Nigerian constitution considers a woman to be at the age of majority when married, irrespective of her actual age. This means that an eight-year-old child bride is an adult in the face of the law and would be tried as such if she committed a crime. Child marriage also causes serious mental, emotional, psychological, physiological, and medical consequences for young brides, who are more vulnerable to sexually transmitted infections and diseases such as HIV/AIDS and Hepatitis B. There is also the high likelihood of developing birthing complications such as VVF/RVF (tearing of the vagina and urinary passage) and even death.

Other human rights violations linked to Sharia law include the public flogging of women accused or found guilty of adultery or prostitution; segregation between men and women in public transportation; punishment for gambling; prohibition of drinking alcohol regardless of religious affiliations; defined mode of dressing for women in public spaces; and restriction of movement for women. In two well-publicized examples from 2002, two northern Nigerian women, Safiya Hussaini and Amina Lawal, were sentenced to death by stoning for the crime of adultery under Sharia law. After a massive public outcry, the Sharia court of appeal later overturned both sentences.

In addition, the recent promulgation of the Same Sex Marriage Prohibition Act  (SSMPA) 2013 by Nigeria was supported overwhelmingly by both Christians and Muslims, who argued that homosexual practices are not acceptable or tolerated by either religion. This stance denies sexual minorities their rights to privacy and freedom of association.

In all of these cases, religion had significant influence on the law to the profound detriment of human rights.

Finally, the Boko Haram Islamic terrorist sect exemplifies the most extreme religious fanaticism and fundamentalism in Nigeria. This group has been responsible for a series of bombings and kidnappings aimed at forcing the Nigerian government to relinquish power to the Islamists. Their stated agenda is the end of “western” education in Nigeria and the forceful conversion of the country to an Islamic state, irrespective of the religious plurality of the country.

Clearly, religion has had many detrimental influences on human rights in Nigeria, and human rights activists must therefore be vigilant in keeping religion separate from the state. Philpott may argue that reason is not enough to justify human rights, but I contend that laws should be based on sound reasoning and humanism alone. Of course, religious practices that are consistent with international human rights laws should be encouraged, but religious teachings that stifle development and progress on rights must be avoided in legislative actions.

There are over 400 different religions in the world, each believing to be superior to the teaching of the other. Many of these religions are autocratic in their principles and hardly observant of human rights. When making laws, whose religion wins? In order to safeguard fundamental human rights and privileges, we simply must keep religion out of the law.

Geraldyn Ezeakile lives in Lagos, and holds a post-graduate diploma in peace and conflict resolution. She is the secretariat focal point for the Nigerian Feminist Forum (NFF).