The withdrawal decision is the most recent step on the part of the ruling circles, personified by Turkey’s president, in their policy practices against gender equality, mostly based on Islamic moralistic grounds for justification. 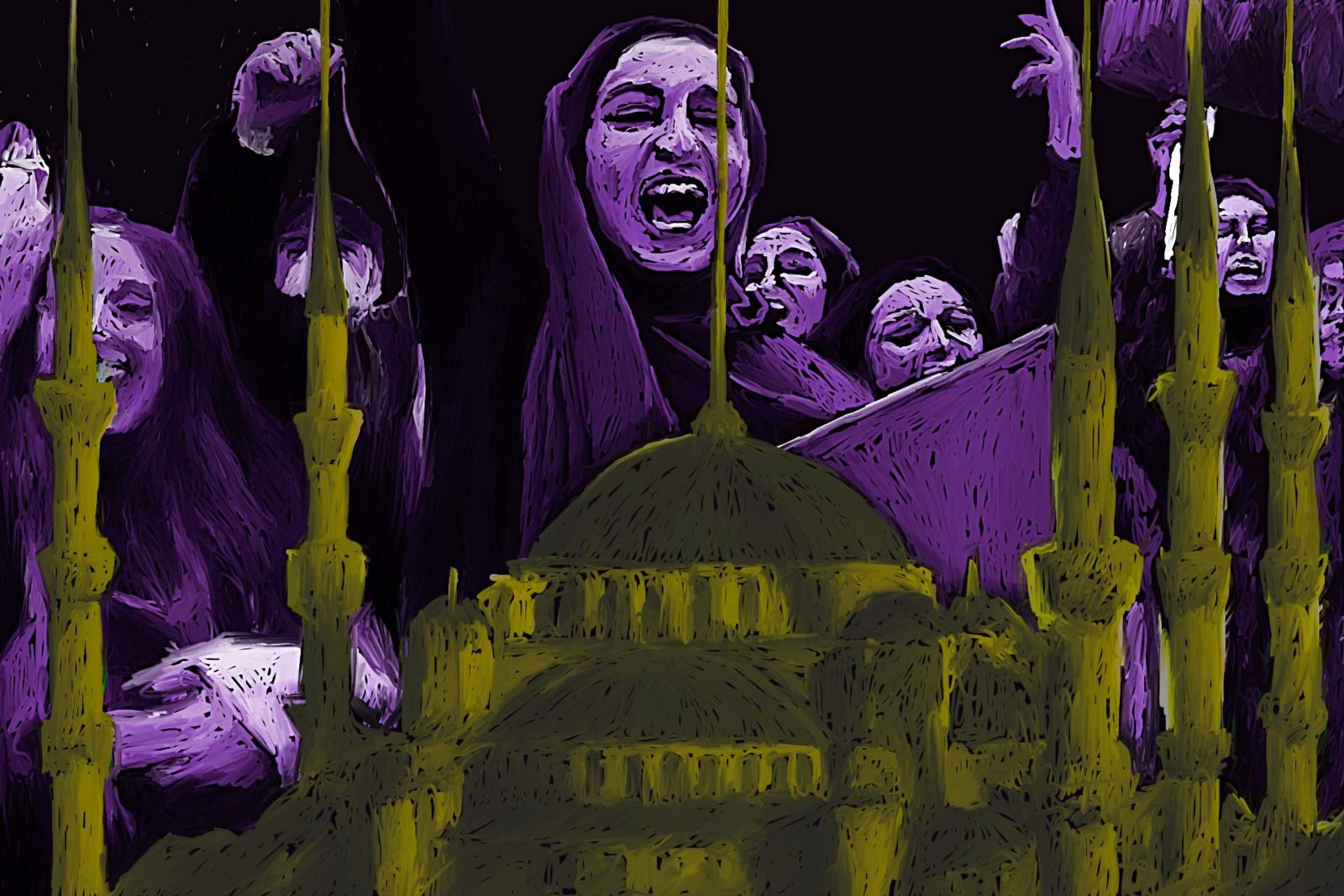 On July 01, 2021 Turkey withdrew from the İstanbul Convention. The withdrawal process started by the release of a presidential decree, on March 20, 2021, at midnight. The Convention is the main international legal document that holds the member states responsible to ensure the protection of women and the LGBTIQ+ community  against domestic and intimate violence. The announcement came just as the European Council was preparing to celebrate the 10th anniversary of the Convention in May. It took a month for European  Union bodies to express their concern about the implication of this decision. On  April 22, the Parliamentary Assembly of the Council of Europe (PACE) declared that it would bring the withdrawal  decision to procedural scrutiny at the Venice Commission. According to the PACE, the presidential decision  to withdraw from a major human rights convention, excluding parliamentary debate and opposing voices, is against democratic credentials. Thus, it should be debated at the Venice Commission within the scope of a “comparative study on the modalities of ratification and denunciation of the Council conventions.”

This is hope-giving at a time when feminist and women’s movements are on the edge of burnout in their struggle against conservative-authoritarian measures, threatening women’s and non-heteronormative people’s right to life, to live safely and free from violence. The withdrawal decision is the most recent step on the part of the ruling circles, personified by Turkey’s president, in their policy practices against gender equality, mostly based on Islamic moralistic grounds for justification. The Justice and Development Party governments have consistently pursued anti-right discursive practices in their gender policies, frequently marginalizing feminists as immorals and/or radicals.

Recently, Turkey underwent  the last phase of regime transition from a republican form of governing that was rooted in the early-twentieth century nation-state construction process. All the while, the feminist and women’s movements in the country have been contesting varieties of republican patriarchy for over nine decades. They developed strategies, tactics of struggle, and styles of cooperation against the patriarchal readings of equality and freedom. The regime change hosted new challenges for feminist and women’s movements. It necessitated that feminist activists and women’s rights advocates interrogate their established forms of struggles, tactics, and strategies that appear to fall short of responding to emerging modes of patriarchy.

From day one of the withdrawal decision, R. T. Erdoğan, the president of Turkey, and his supporters have claimed that the Convention is foreign to the majority culture in the country. They base their claims on a homophobic approach–that the Convention promotes immoral relationships.

Some civil society organizations risked falling into the trap, arguing that the Convention mainly  concerns women, not LGBTIQ+ rights. Some others reproduced issue-based activism of the 1990s, once more by claiming the need to reorganize in new forms to challenge the decision. This bears the pros and cons of what Unal refers to as two different forms of coalition  building–strategic and transformative– which can be manipulated to work against each other in  authoritarian regimes.

A feminist political struggle built on historical experience is crucial for acting in concert against state anti-equality manoeuvres in the gender regime of the country. The women’s Coalition is an important example for this concerted action. The Coalition was founded in 2002 and since then, has worked side by side with women’s rights organizations within the scope of the European Women’s Lobby Coordination in Turkey. It is an integral part of the international women’s movement, which actively monitored and contributed to the constitution of İstanbul Convention.

Primarily  through social media campaigns, the Women’s Coalition offers a venue to unite women around the world in rejection of the most recent step back by the state and in support of a life without violence. In their viral campaign one twitter thread read as follows:  “Devlet kadına şiddetsiz yaşam  hakkını tanımadı” (The state did not recognize women’s right to life free of violence”) #İstanbulConventionIsOurs, #WeClaimIstanbulConvention.

At the national level, the Coalition tries to access all relevant bodies, organs, platforms, and initiatives by mobilizing working groups. It has so far approached bar associations, gathered the MPs, and met with law professors. The Coalition constituents meet regularly every week and engage in practices for collaborative reflection on the next steps to take.

The Coalition is also involved in a search for (new) means to pressure the state to retreat from the withdrawal decision, to prove that it is against the rule of law. In its pursuit, it reviews the lawsuits brought to the Court of State. It addresses the public at national and local levels.

A feminist political struggle built on historical experience is crucial for acting in concert against state anti-equality manoeuvres in the gender regime of the country.

The Coalition did and still does spread its word to multiple sites at the international level, from civil society organizations to regional decision-making bodies like the EU (specifically, European  Parliament, European Commission, European Union Council) as well as to the general public in different countries. It does so by using written, oral and visual material.

It participated in the Generation Equality Forum, prepared informative visuals, featuring political actors in and outside Turkey who shared their support to present at the UN Commission for the Status of Women. The diversity of Coalition members is helpful in acting at multiple levels, and their established horizontal working patterns facilitate coordinated action. The Women’s  Coalition is determined to continue its multi-level, multi-dimensional activities to keep the İstanbul Convention as a basic international legal document for women’s and LGBTIQ+ rights in Turkey. It is determined to advocate for women’s and LGBTIQ+ people’s right to  life, to live free from violence and the threat of violence, locally, nationally and transnationally until they “build the world for such life.”

Backlash to gender equality is  rampant all around the world, and Turkey is not exempt. And regime transition that the country has been witnessing over the last decade hosts a conservative discourse that justifies authoritarian policy preferences. The recent presidential decree to withdraw from the İstanbul Convention symbolizes the denial of gender equality, the dismissal of coordinated legal measures to guarantee women’s and  LGBTIQ+ people’s safety and well-being. A transnational feminist struggle is urgent against such attacks on women and LGBTIQ+ rights, which are part and parcel of anti-democratic policy practices.

Finally, histories are easily lost during regime transitions. The history of the Women’s Coalition relies on its constituent organizations’ past and present activities as well as their collaboration practices. They refrain from starting feminist history all over again by themselves; rather, they  attend to past feminist experiences – a significant leverage at times when facts are so bare clear  that it becomes risky to access them. The decisiveness of Women’s Coalition relies on its hold on  to feminist history despite different modes of patriarchy.

Simten Coşar is a visiting professor at the University of Pittsburgh (2020-2021). She has published in English and Turkish on politics in Turkey, intellectual history, feminist politics, and feminist theory.