The idea of a “global middle” assumes that human rights transcend borders. But do they really?

The best of all possible worlds for human rights advocacy is presumably a single global movement, with common goals. This ideal movement would have a shared internal economy where need—not fundraising or donor inclinations—sets priorities and directs the flow of money. The movement’s direction of travel would be the result of democratic deliberation. We might argue that the reality, or possibility, of a singular global human rights movement is a core belief for many prominent human rights advocates—that everyone in “human rights” is in it together, on the same team and united by “the values and cause that we serve in common.”

Global social media and mobile technology appear to give transnational activists the tools for this job, promising increasingly effective communication and action that dispenses with national borders. Now we get multiple boomerangs and virtual networks where information is widely shared and campaigning pressure comes from sources inside and outside the state. This kind of lasso effect tightens the noose around reluctant governments from all sides—a welcome step forward in improving human rights outcomes.

Such a “convergence towards the global middle” offers many possibilities, as others in this debate have recognized, but it also presents clear problems. Some come from within the global human rights movement, especially over funding and priority setting. Yet these accounts still assume that the border itself, the distinction between inside and outside the state, can be overcome, and the state tamed. Human rights are, after all, about the moral irrelevance of that border when it comes to a person’s fundamental entitlements.

This vision, of progress in social and criminal justice with the bad guys getting their just desserts, is deeply appealing even for those of us skeptical that human rights advocacy is still the most effective way to go about it. But what looks like the global middle is really still just international space with enhanced local legitimacy. Here the myth of a single global movement comes under scrutiny. If the state boundary is real, there remain two movements with the state standing between them.

Institutions of the state continue to control demographic, social and economic space in ways that make them major players in the great human rights convergence. It is the state that signs treaties and enacts laws, that collects taxes and polices borders. This control of “the middle” is the state’s whole business model. In allowing, denying or regulating flows of people, money and goods in and out of its territory, the state exercises its core power.

Inevitably the state has significantly more control inside its borders where it has legal and executive jurisdiction. It is the pre-eminent power here. In Russia, the state defines human rights NGOs as foreign agents. In Hungary, Egypt, India and elsewhere, restrictions on foreign funding stifle the activities of human rights organizations. The state may kill human rights protestors or turn a blind eye to those who murder them. It can, of course, simply lock them up or publicly brutalize them. Communications restrictions are common. And the state can always make political capital out of opposing human rights. 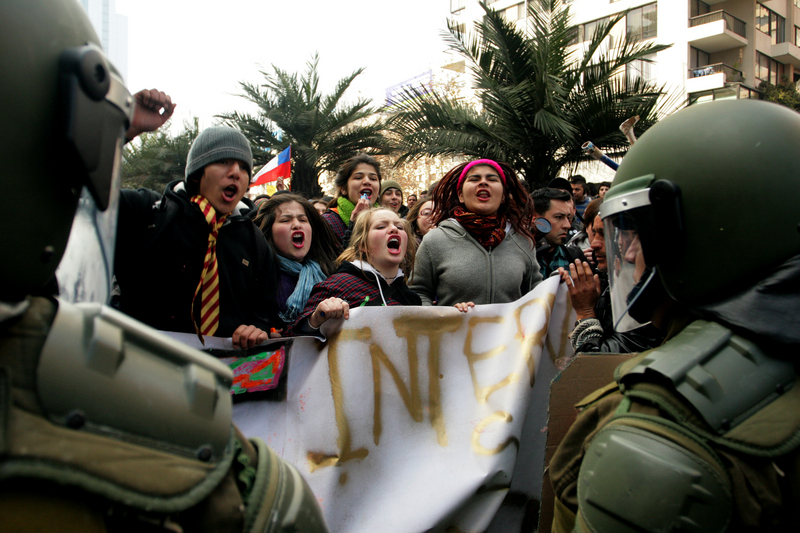 Police disperse a Chilean student rally. "Inevitably the state has significantly more control inside its borders where it has legal and executive jurisdiction. It is the pre-eminent power here."

The global middle also cannot straddle the border for the same reason—entering and leaving a state, holding property, moving money, all require state permission. Humanitarians have understood they might sometimes need to acquiesce to state demands to continue giving aid, while high-profile international human rights advocates have recently been denied entry to states like Egypt and the UAE. Even in states like Brazil and South Africa, which are broadly supportive of global human rights and registered as “free” by Freedom House, significant abuses by the police and others continue to occur. There is no diplomatic immunity, no extra-territoriality, no diplomatic bag for human rights groups that removes the border.

In international space the state lacks such executive power. To hinder the actions of international human rights groups it can only condemn them publicly, seek allies to frustrate them and support legislation and regulation that either hampers human rights efforts or redefines them. This is the terrain that gives global NGOs their platform. Yet here is the twist. These large NGOs thrive because they are based in the states that, hitherto, have been most influential in the international system. Imagine if Amnesty International were based in South Africa or if Human Rights Watch were Brazilian? Would they retain the same level of influence or would they be subject to a sovereign counter-discourse from British and American citizens asking by what right they criticized the US and UK governments? Amnesty’s moving closer to the ground strategy is a fascinating test case of this. I’ve argued elsewhere that Human Rights Watch’s real power comes from the blue passport. Imagine Brazil’s Conectas moving closer to the ground by opening offices in New York and London to report on US and UK human rights abuses.

The link between Western liberal democracies, their foreign policies, and human rights goes deep. International space is sustained because these states sustain it (and thus, is it really international?). It works for their international goals whether directly (by using rights conditionality to pressure others) or indirectly (because globalization opens up markets and cheap labour for Western economies). Human rights are the benefactors. The middle, while international, is really rooted in this Western power. It remains a space that is open for now but not necessarily indefinitely. And as we know, when it seems useful to engage in a massive invasion of privacy globally (nationalizing the international) both the US and UK states have few qualms.

There remain, in other words, two worlds. The international, conditional on Western support, and the national, where living in a democratic state with rising per capita incomes is the key to better human rights outcomes.

This is where the myth of one human rights movement will be tested. Members of the growing middle class in the South are likely to prefer civil and political rights—those rights that protect their person, free expression and assets—over those that require expanded welfare and taxation and even redistribution of wealth. This middle class is a democratic state’s core constituency. Good news for LGBT rights and women’s rights, bad news for social and economic rights. Global class relations replicate themselves within human rights at international and national levels, in other words. The split between civil and political and social and economic rights might be structural and not transitory: one set of human rights for the wealthy, the other for the poor. In a world of rising inequality this tension can only increase.