Contractual arrangements, insurance, and tort law, all private law tools, fail to address the awful threat of hazardous substance leaks because  they are unable to identify the companies responsible for the chemical leaks. 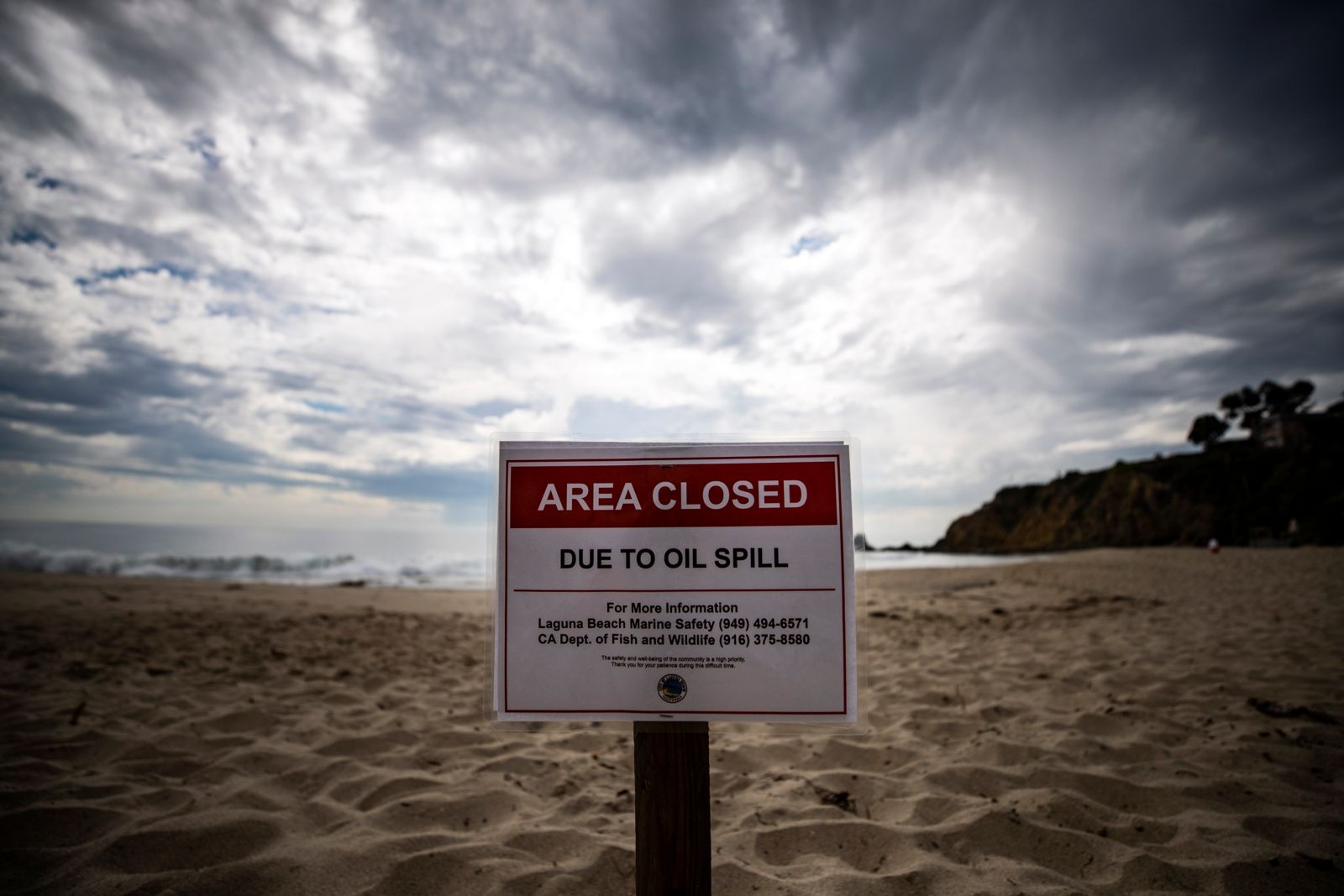 A sign on Crescent Beach read 'Area Closed Due to Oil Spill' after an oil spill off the coast of Newport Beach, California, in October 2021. Roughly 126,000 gallons of oil spilled into the Catalina Channel from a pipeline running from the Port of Long Beach to the Elly offshore oil platform.  EFE/EPA/ETIENNE LAURENT

Climate change has escalated decade by decade since the Industrial Revolution. This worldwide phenomenon with terrifying consequences for the environment is unequivocally the result of reckless human activity, such as excessively cutting down forests and burning fossil fuels. Its consequences are undeniable—Greenland lost roughly 279 billion tons of ice every year between 1993 and 2019, and the global sea level rose approximately eight inches over the last century.

One of the most devastating effects of climate change is the increased frequency and intensification of natural disasters like hurricanes and flooding, which pose a significant threat to chemical facilities located in low‐lying coastal areas. On top of the destruction brought on by natural disasters alone, when extreme weather  collides with industrial plants it can lead to industrial disasters such as explosions, fires, and chemical releases. These industrial disasters not only present a tremendous danger to the environment, but they  also threaten communities living near such facilities.

For instance, there are 872 chemical facilities within 50 miles of the U.S. Gulf Coast, a place often struck by  hurricanes. If a chemical spill were to occur, triggered by a natural disaster, more than 4.3 million people who live close to these chemical plants would experience severe toxic exposure to hazardous floodwaters. This threat extends far beyond the United States as chemical plants across the world are at high risk of releasing toxic substances and  by no means adequately prepared to deal with such crises.

When a technological accident occurs as the result of a climate-change-triggered chemical release, it is known as a “Natech” event, or natural-hazard-triggered technological event. Even though chemical facilities worldwide are instructed to evaluate all potential causes of emergencies, many reports have found that risks related to natural disasters stemming from climate change are rarely considered.

This leaves vulnerable chemical facilities at a loss in responding to severe threats such as hurricanes.

The impact of Natech events on chemical installations, offshore platforms, and other infrastructures that process, store, or carry hazardous substances can cause fires, explosions, and toxic leaks. Some of the most eye-opening examples of recent major Natech events are the 2002 river floods in Europe, which resulted in considerable hazardous substances releases, including that of chlorine and dioxins; the 2011 Tōhoku earthquake and tsunami, which caused a meltdown at a nuclear power plant and explosions at oil refineries; and Hurricane Sandy, which occurred in 2012, triggering multiple hydrocarbon spills.

Toxic floodwaters affect communities because of poor decisions regarding land use, facility siting, engineering, and environmental regulation. Contractual arrangements, insurance, and tort law, all private law tools, fail to address the awful threat of hazardous substance leaks because  they are unable to identify the companies responsible for the chemical leaks and hold the right people accountable.

For many countries, the existing regime regulating chemical facilities has existed for decades. Because it was developed for a different time, it reflects other priorities and is no longer effective for the status quo. The regulations governing chemical facilities in the United States, for instance, date back to the 1972, when the Clean Water Act was enforced. Back then, climate change was not perceived as such a serious, impending phenomenon. As a consequence, it does not make it mandatory for chemical facilities to consider Natech events when developing their emergency plans. Most nations have been relying on private law to govern chemical storage for a long time. Yet, there are no mandatory storage tank performance, inspections, or record-keeping standards. This lack of regulations leads corporations to store millions of gallons of chemicals in areas prone to natural disasters caused by climate change without the necessary preparedness.

In contrast, public law is a viable and effective alternative to private law for regulating chemical facilities and protecting the nearby communities. This is because public law concerns issues that affect society as a whole and includes administrative and municipal law. Public law bodies and officials have the authority to make decisions and take action from Parliament. Some public bodies that can help tackle the issue of outdated regulations for the chemical industry are departments, agencies, and health authorities. Instead of regulating the relationship between individuals or industries, public law regulates the legal system itself.

It is undeniable that private law is failing, so countries need public law endeavors to prevent chemical disasters, including standards for hazardous substances storage and other reforms to close the gaps in the chemical management statutes.

Chemical industry executives often argue that new regulatory regimes are unnecessary because companies have their own programs meant to prevent accidental releases of hazardous substances during natural disasters. They also believe this because companies are subject to safety mandates from their own insurance carriers. Nevertheless, despite these beliefs and private law mechanisms, more and more Natech events are occurring worldwide. Up to 86% of these industrial disasters are the result of storms, extreme temperatures, and lightning, which are becoming increasingly frequent due to climate change.

It is undeniable that private law is failing, so countries need public law endeavors to prevent chemical disasters, including standards for hazardous substances storage and other reforms to close the gaps in the chemical management statutes. Authorities should reduce the vulnerability of communities residing near chemical plants, and the government should strengthen the current chemical regulatory regime to become more responsive to natural disasters caused by climate change. As a consequence of terrible Natech events, Japan and some EU countries have introduced building codes and land use controls that specifically address potential chemical leaks.

Policymakers and emergency managers should compile a full inventory of vulnerable chemical facilities as a first step in the right direction. They should also have a rigorous understanding of the hazardous substances stored in each chemical plant and the facility's extent of exposure to natural disasters. Additionally, environmental agencies must set performance, construction, and leak detection requirements for chemical storage tanks and require facilities that store chemicals above a specific volume to prepare spill prevention and response plans.

Authorities and policymakers should learn from past catastrophes

The impact of climate change on the environment will escalate with each passing decade, and there is nothing we can do to stop it. Still, we can urge authorities and policymakers to take radical measures as soon as possible to prevent vulnerable communities from toxic floodwaters exposure in the event of a chemical release. The higher-ups should learn from past catastrophes such as the Tōhoku earthquake and Hurricane Sandy and take radical measures to prevent future Natech events.

Policymakers and authorities should not assume the present weather conditions or the infrastructure of chemical facilities will remain the same. For this reason, they must build adaptability and resilience into emergency responses. Likewise, they should not assume chemical facilities that have not experienced a toxic substance leak in the past will not face one in the future, as climate change causes natural disasters to occur more often.

Good examples of international endeavors meant to promote Natech risk management and to raise awareness include the Natech addendum of the Organization for Economic Co-operation and Development (OECD) Guiding Principles for Chemical Accident Prevention, Preparedness and Response and the United Nations Sendai Framework for Disaster Risk Reduction 2015–2030, which focuses on the need to enhance preparedness for Natech events.