McKay and Heisler reflect on the role of medical personnel when treating patients victims of excessive police force. 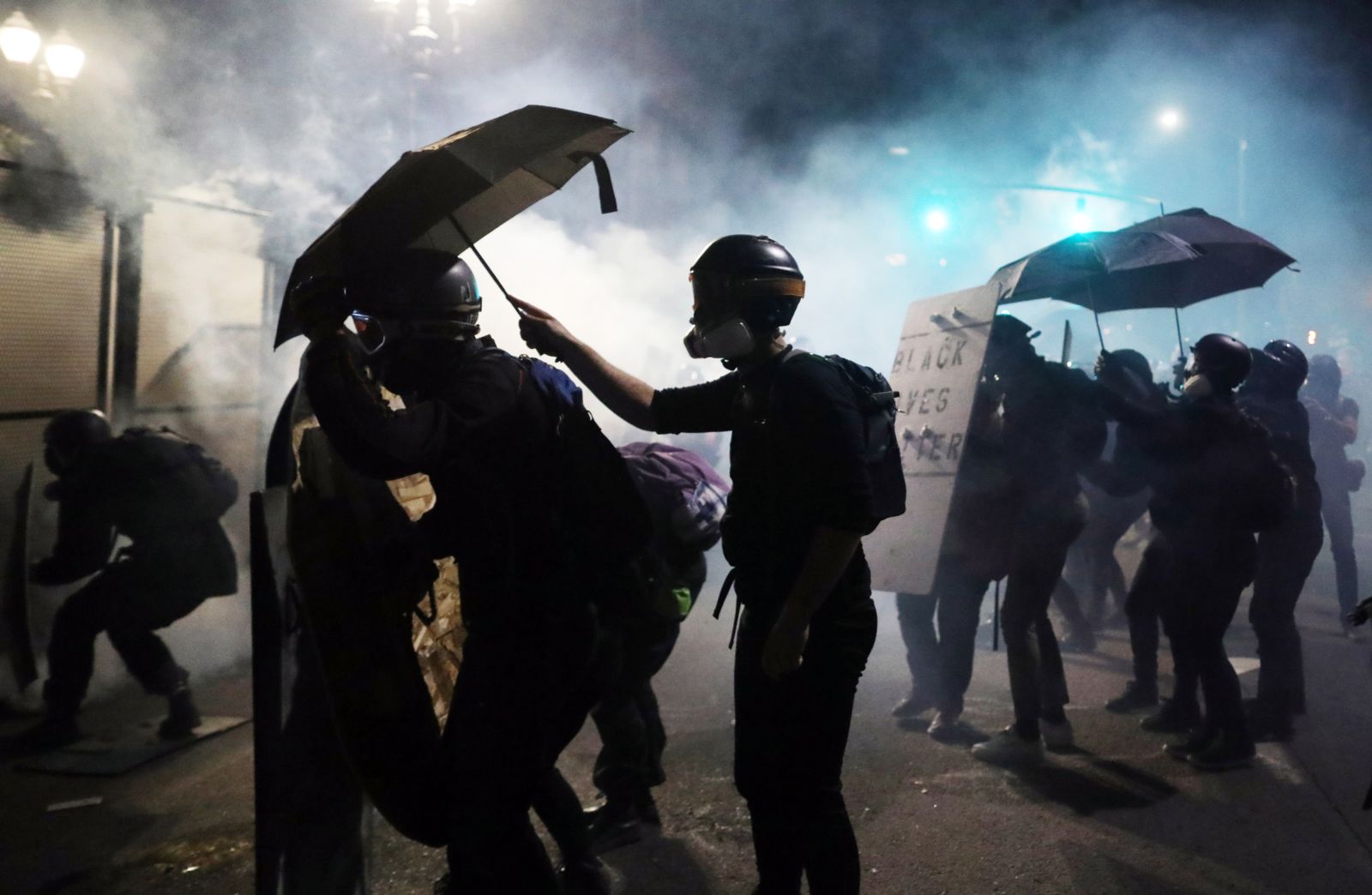 Residents of communities of color in the Portland area of Oregon have been far more likely to contract COVID-19, become hospitalized, or die from the virus than people living in the city’s less diverse areas. The pandemic has exposed Portland and Oregon’s deep-seated inequalities and structural racism, which further fueled the city’s months-long racial justice protests

Many white Portlanders and their counterparts across the country are beginning to confront the United States’ racist roots and their own privilege. Often, this has involved joining the protests in response to the police killing of George Floyd. But instead of facilitating this ongoing reckoning with U.S. racism and respecting the right to safely protest, law enforcement from Portland to New York to Austin has all too often met demonstrators with excessive, indiscriminate, and dangerous abuse of so called less-lethal weapons.

For example, law enforcement shot at least 115 people in the head with kinetic impact projectiles (rubber bullets and other projectiles) across the United States during the first two months of the George Floyd protests, according to a visual analysis conducted by our team at Physicians for Human Rights (PHR). And this is likely an undercount.

Law enforcement agents shooting crowd-control weapons at protestors’ heads is indeed a global phenomenon. In Chile, medical researchers documented how the use of kinetic impact projectiles during the country’s period of civil unrest in 2018-2019 “resulted in severe ocular trauma, visual impairment and permanent disability” among hundreds of people who protested. So-called “pellet guns” have killed and blinded dozens of people in Kashmir in recent years. In Colombia last November, a teenager who demonstrated for better education was struck by a projectile and killed, igniting further unrest. Since the 1980s, our colleagues at PHR have documented governments’ excessive use of crowd-control weapons in Bahrain, Georgia, Israel and the Occupied Palestinian Territory, Kashmir, Panama, Thailand, Turkey – and now in the United States.

Small wonder that some people have been deterred from protesting, fearful of the severe injuries that can result from being gassed or shot at during demonstrations. But a country where people do not feel safe to protest is a country that risks losing its most precious freedoms. Regardless of one’s politics, we should all value being able to peacefully assemble or express ourselves without the possibility of losing an eye or having our skull fractured by these weapons.

Regardless of one’s politics, we should all value being able to peacefully assemble or express ourselves without the possibility of losing an eye or having our skull fractured by these weapons.

In Portland, however, protestors have often had to resort to donning protective equipment – ski goggles, helmets, gas masks, shields, even leaf-blowers – to shield themselves against a barrage of tear gas, stun grenades, and rubber bullets. This echoed some of the creative tactics adopted by demonstrators in Hong Kong and elsewhere last year. As Portland journalist and organizer Mac Smiff, who is Black, keenly put it:

Indeed, it was law enforcement – particularly the federal agents – who escalated the situation in the Portland streets.

We investigated the protest policing practices of the Portland Police Bureau and federal agents and found a consistent pattern of disproportionate and excessive use of force. Our extensive report, published in October, documents how law enforcement’s deployment of crowd-control weapons and their obstruction of medical care at the protests resulted in severe injuries and psychological trauma to both volunteer medics and protestors.

Under international guidelines developed by the United Nations (UN), when law enforcement uses force during protests, government officials are obligated to ensure effective access to medical care and transport for injured protestors.

Yet in Portland, except for rare exceptions, official paramedics with the city and county did not provide care to injured protestors, medics, journalists, or legal observers at the protest site, nor did ambulances come right to those injured at the protest site. This illustrates reports by Black Portlanders of ambulance services delayed in arriving in response to calls from Black neighborhoods and areas deemed “not safe” for years, a phenomenon all too familiar for communities of color across the country.

Instead, an impressive and complex ecosystem of volunteer medics stepped in to try to fill these gaps in medical care. However, these medics were often subjected to violence and obstruction by law enforcement.

When we observed the Portland protests and interviewed medics there in July, we were stunned by the government’s failure to protect those providing emergency medical services and transport to the injured. Frankly, it reminded us of situations we’ve documented in authoritarian countries around the world, like Turkey.

In our work researching crowd-control weapons and attacks on health care across the globe, we’ve seen how excessive force corrodes the human rights that are foundational to any democracy. Crowd-control weapons should be an absolute last resort, only used when dealing with genuine and imminent public safety threats, and after all other means for de-escalation have been exhausted. The unprecedented deployment of “less-lethal” weapons by U.S. law enforcement in response to largely peaceful protests in the wake of Floyd’s death is not just a grave threat to the human body, but to the foundational values of our country.

All tiers of government should work to make anti-racism protests safer and more respectful towards human rights.

With the contentious U.S. election now over but a continued potential for protests about the transition of power, racial justice, and other issues, it is imperative that cities, states, and the federal government reform their approaches to policing protest. Based on our learnings from Portland, we call on cities to establish medical safe zones close to any protest area, where medical personnel can safely attend to any injured person (whether acting officially or as volunteers) and transport them to emergency departments.

Local, state, and federal law enforcement officers alike must exercise restraint and be held accountable if they abuse crowd-control weapons or attack medics. The incoming Biden-Harris administration should direct the Department of Homeland Security to open an inquiry into the conduct of federal personnel during their operations in Portland and Washington, DC last summer. Urgently, the federal government should revise training, policies, and practices on crowd-control weapons to comply with international human rights and policing standards. All tiers of government should work to make anti-racism protests safer and more respectful towards human rights. And trailblazing, Black-led activist organizations such as Don’t Shoot Portland should be supported in their work to build a city and a country where Black Lives Matter.

Health workers have a vital role to play not just in providing care to injured protestors, but in documenting crowd-control abuses and advocating for justice. Their skills, efforts, and voices are needed now more than ever.

Donna McKay, MS is the executive director of Physicians for Human Rights (PHR). She joined PHR in February 2012, bringing more than 20 years of international and domestic nonprofit experience to the organization. She provides overall leadership and strategic direction and manages PHR’s staff and volunteers globally. You can follow her on Twitter at @DMcKayPHR.

Michele Heisler, MD, MPA is the medical director at Physicians for Human Rights and a professor of internal medicine and of public health at the University of Michigan. As a primary care physician, her research centers on development and evaluation of effective programs to improve health, health equity, and protection of human rights. You can follow her on Twitter at @MicheleHeisler.