Time will tell whether Resolution 43/1 will dispose Human Rights Council membership to address situations of gross and systematic violations in other countries around the world. 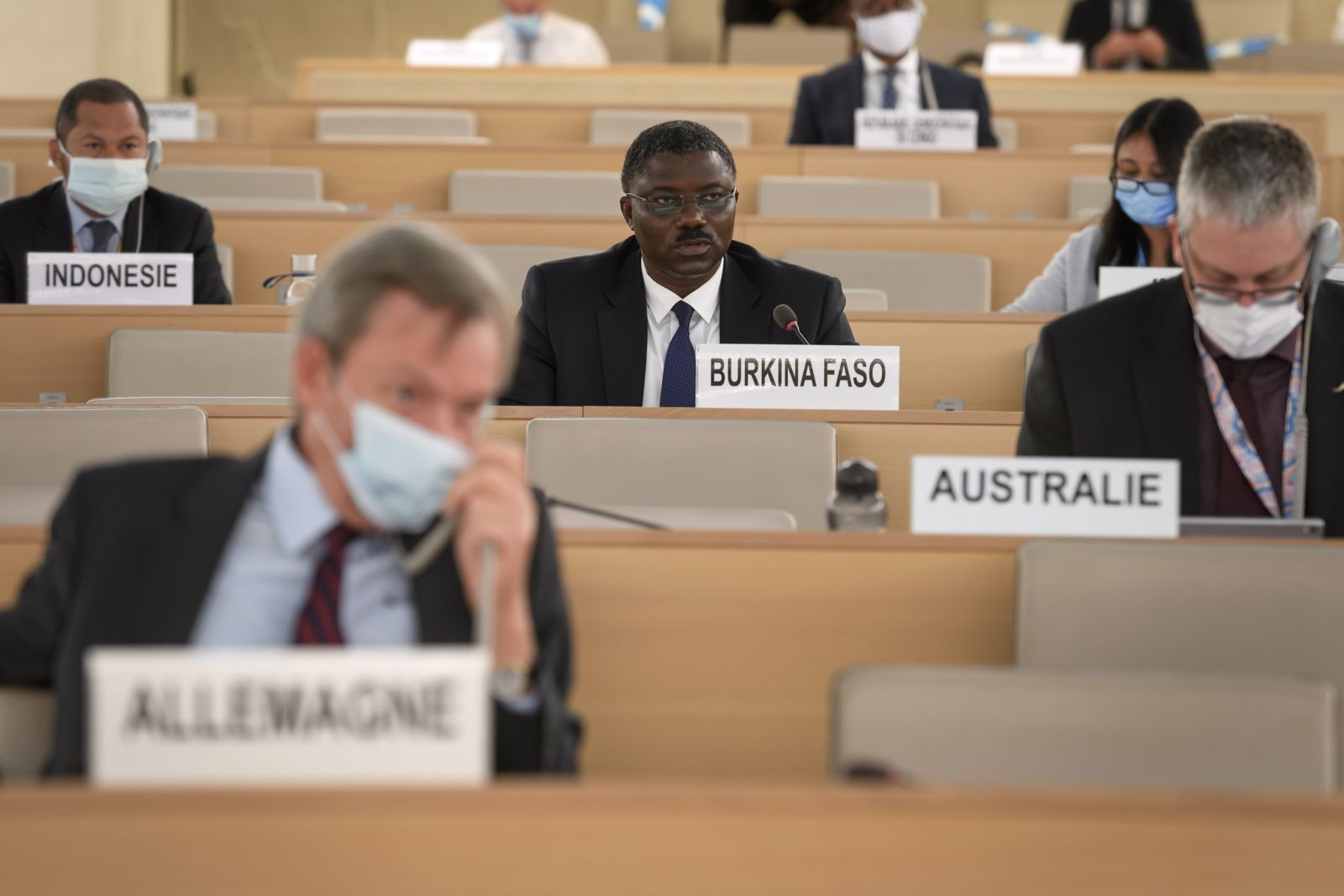 Ambassador Dieudonné W. Désiré Sougouri of Burkina Faso delivers a speech during the vote of a resolution condemning structural racism and police brutality in the wake of the death of George Floyd at the United Nations Human Rights Council in Geneva, Switzerland, 19 June 2020. EFE/EPA/FABRICE COFFRINI / POOL

On June 8, 2020, the family members of the victims of police killings in the United States and more than 600 civil society organizations from around the world opened a new chapter in the fight against racism. They wrote to members of the United Nations Human Rights Council to request them to urgently hold a special session on the US to respond to the grave human rights crisis of repression of nationwide protests following the police murder of George Floyd and other unlawful killings of unarmed Black people by police and armed white vigilantes.

In response, on June 12, Ambassador Dieudonné W. Désiré Sougouri of Burkina Faso, acting on behalf of the African Group on human rights in Geneva, wrote to the President of the Council, Ambassador Elisabeth Tichy-Fisslberger, to request an urgent debate on racially inspired human rights violations, systemic racism, police brutality and violence against peaceful protests.

The Council held that urgent debate on June 17 at its resumed 43rd regular session. Two days later, it adopted a consensus resolution A/HRC/RES/43/1 to promote and protect the human rights and fundamental freedoms of Africans and people of African descent against the excessive use of force and other human rights violations by law enforcement officers.

In that resolution, the Council “strongly condemns the continuing racially discriminatory and violent practices perpetrated by law enforcement agencies against Africans and people of African descent, in particular which led to the death of George Floyd on 25 May 2020 in Minnesota … and the deaths of other people of African descent, and also condemns the structural racism in the criminal justice system”.

The resolution also mandated the UN High Commissioner for Human Rights, Michelle Bachelet, assisted by relevant Special Procedures, to prepare a report on systemic racism and violations of international human rights law against Africans and people of African descent by law enforcement agencies. The report is to be presented to the Council in June 2021.

The urgent debate and the resulting resolution are exceptional for addressing a human rights situation in a permanent member of the UN Security Council for the first time since the Council’s creation in 2006. Although neither the request for the debate nor the resolution specify that they pertain to the US, both clearly implicate that country. Time will tell whether this precedent will dispose Council membership to address situations of gross and systematic violations in other hitherto untouchable countries like China, Egypt, India, Russia or Saudi Arabia.

One wonders what effect the debate, the resolution, and the forthcoming report will have on the attitude of the US towards the Council, which it quit in June 2018. The hostility of the current US administration to the Council was already clear, and the new resolution will only reinforce its disdain. Friends of the US and human rights champions should actively encourage a new US administration to engage positively with the High Commissioner in the preparation of her report as a step towards US re-engagement with the Council.

Resolution 43/1 presents the High Commissioner with both opportunities and thorny challenges in the report that she must write. The report represents an occasion to draw focused global attention to racism and related police brutality in the lead-up to the twentieth anniversary of the Durban World Conference against Racism in 2021. However, one year is little time to prepare such a potentially complex report. The High Commissioner needs to act quickly and decisively.

Will the High Commissioner be able to resist the pressure that the US will place on her to tread lightly?

At the adoption of the resolution, the Council secretariat explained that resources required to prepare the report will not be available until the General Assembly approves them toward the end of 2020. In the High Commissioner’s first oral update on the preparation of the report on  October 1, she announced that her Office has established a dedicated team for the implementation of resolution 43/1, but also recalled the importance of obtaining resources. This is a time for the High Commissioner to explore new alternatives, such as crowd funding, to obtain the resources necessary to fulfill her responsibilities under the resolution.

Putting aside the major technical challenges, preparing the report also comes with substantial political challenges. Will the High Commissioner be able to resist the pressure that the US will place on her to tread lightly? While the report must address the effects of systemic racism and violations of human rights law in the US, the mandate is not limited to the US. The High Commissioner is tasked with looking into systemic racism and police brutality against Africans and people of African descent wherever they live, be it in the US, Brazil, France, China, Jamaica, Libya, South Africa, Nigeria, Kenya or elsewhere. Will African countries accept that the resolution they piloted leads to such examinations in African countries? Will other countries and civil society organizations accept that it does not?

While the report must address the effects of systemic racism and violations of human rights law in the US, the mandate is not limited to the US.

To make the best of the opportunities created by the resolution, the American Civil Liberties Union (ACLU) and other civil society organisations have important responsibilities to use it in their national and local advocacy against racism and police brutality; to encourage their national authorities to engage with the High Commissioner; and to contribute the timely high-quality information that the High Commissioner and the Special Procedures require to fulfill their responsibilities under the resolution.

Since the adoption of resolution 43/1, the ACLU has written to the High Commissioner, on behalf of the families of victims of police brutality in the US and nearly 400 NGOs, with valuable recommendations and suggestions for the preparation of her report. Those recommendations were reiterated in the Human Rights        Council. The ACLU and other organisations  have proactively engaged the Inter-American Commission on Human Rights on systemic racism and police brutality in the US—they need to do likewise with the High Commissioner—and parallel efforts by civil society are required in other countries blighted by systemic racism and police brutality against Africans and people of African descent. The High Commissioner and her Office must also reach out actively to engage civil society.

The criteria for evaluating the urgent debate, the resolution, and the High Commissioner’s report will be their contribution to combating systemic racism and police violence against Africans and persons of African descent on the ground, wherever those violations occur. That contribution will depend largely on how the UN and civil society implement the resolution. Concern with providing accountability and redress for the victims of racism and related police brutality must remain their guiding principle.