Appeals to humanity and the pronouncement of universal standards are empty (or worse) if they don’t begin with the difficult work of identifying and dismantling structures of oppression. 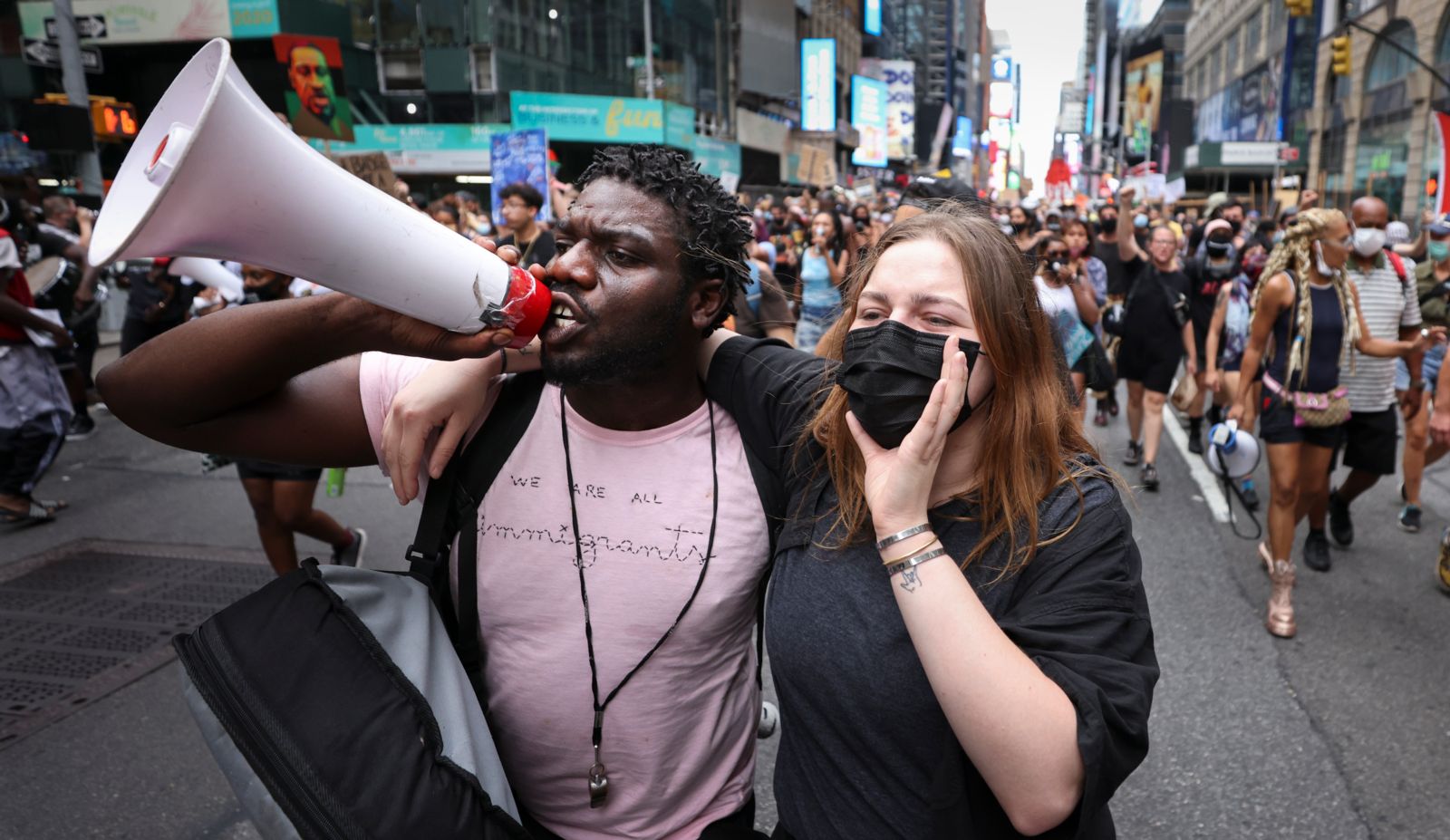 People march during a protest in response to the shooting on 23 August by police officers in Kenosha, Wisconsin of Jacob Blake, a Black man who was trying to get into his car with his children, in New York, New York, USA, 24 August 2020.

In unjust times, we dream of escape to a harmonious world, where suffering, violence, and oppression are unknown. For several decades we have been told that the path to that better world is a cosmopolitan one. But the promise held out in this story is false if we neglect the harmful exclusions at the centre of the cosmopolitan ideal. To speak against universality now, with violent identity conflicts proliferating, may seem obscene. However, if it is to provide hope, cosmopolitanism must be critically re-examined, as the experience of communities fighting against xenophobia, systemic racism, gender violence, and deprivation reveal a fundamental inadequacy.

Once a marginal concept in Western thought, cosmopolitanism returned to prominence in the 1990s, as the economic, social, and political changes of neoliberal globalisation came to the fore. The central claim of this new liberal cosmopolitanism is that progress requires universal moral concern for every individual, regardless of their diverse identities and affiliations. As a political project, this requires a move from exclusive identities and rigidly bordered states, to a global society of free individuals, a utopian ideal practically expressed in human rights, international law, and global governance. It’s a story promising universal respect for humanity and a rational global order based on the rule of law.

But as we survey our world today, that promise is tragically unrealised. The power of the state has been expanded by new weapons and tools of surveillance, while the allure of virulent nationalism and vicious xenophobia has returned with surprising force. Human rights and international institutions are hamstrung by the reassertion of national sovereignty by a new generation of authoritarian-minded leaders. The tactics of social movements instrumental in the creation of human rights have been co-opted and distorted by reactionary movements spreading hateful ideologies, undermining democratic politics from the local to the global level.

It’s a story promising universal respect for humanity and a rational global order based on the rule of law.

Crouch distinguishes two axes of conflict to explain our current situation, with a tension between universal individualism and communal tradition, and between free competition and social equality, providing coordinates to make sense of the unexpected—such as working-class voters electing billionaire leaders. Taking emotional identification in politics seriously, Crouch asks: “do transnational commitments have enough emotional energy to transcend the nation’s demand of a monopoly of loyalty?” His response is to offer a more egalitarian and rooted cosmopolitanism, grounded in hope that a younger generation, at ease with unbounded and multiple political identities, might realise such a project.

While Crouch provides an attractive cosmopolitan alternative, drawing it away from neoliberalism and towards democracy and social justice, he misses the central problem. Achieving cosmopolitanism is framed in terms of motivating popular attachment to a common human identity—and making it our fundamental political identity.

Cosmopolitanism requires that we see all individuals as sharing an essential nature, enabling the inclusion of difference into a single moral order. The problem is overcoming people’s irrational attachment to tradition and communal identity, so that “they” can be included in “our” rational plans, drawn up in light of universal moral ideals.

The abstraction of liberal cosmopolitanism makes it impossible to see that the most pressing problem confronting us is not an irrational attachment to our particular identities, but a deeper and more damaging hierarchy of humanity that cannot be reasoned away. The imagined liberal subject, agreeing rational contracts or claiming universal rights, invites us to dream of a new world without addressing the reality of injustice in the actual world.

Planning for a different world, if it is more than utopian fantasy, must address the legacies of existing injustice and embrace democracy in a radical, inclusive form.

As I write, across the USA (and across the globe) communities are protesting systemic racism and endemic police violence. In response, rapper Black Thought writes, “The murder of black, brown and indigenous men, women and children is a global tradition. A heritage. A long legacy…until the…real history of the world and how things became the way they are is told, I fear it’ll be business as usual. A band aid on a bullet wound.”

This is the challenge cosmopolitanism must face. Appeals to humanity, the pronouncement of universal standards, are empty (or worse) if they don’t begin with the difficult work of identifying and dismantling structures of oppression. Planning for a different world, if it is more than utopian fantasy, must address the legacies of existing injustice and embrace democracy in a radical, inclusive form. As long as cosmopolitanism presents justice as an abstract imperative to recognise our common humanity, rather than a project of building political relationships that practice and create common humanity, it will remain an ideology of privileged identities.

Justice requires a reckoning with the murder, theft, rape, abuse, and disrespect of those treated as less-than-human. An invitation to recognise our common humanity is insufficient because who gets to be human, and who decides, has always been a political question. A cosmopolitanism worthy of our hope and effort should begin with those fighting for their own humanity, who are dedicated to building the relationships necessary to the realisation of common humanity.

To paraphrase Virginia Lee, a human rights activist in Washington DC, a more just world must be built “out of the experiences of the oppressed” and create “relationships of solidarity and service rather than dependence and superiority.” Our moral ideals should be built from within this world, not as a denial or it, and our human rights movements need to address the basic hierarchical divisions of our world and fight for an equitable distribution of power, as a precondition of true cosmopolitanism.

Joe Hoover is an associate professor in political theory at Queen Mary University of London. His research focuses on the radical democratic potential of human rights movements, especially the right to housing and the right to the city.