When sexual harassment is reframed as gender-based violence and a human rights violation, rather than just “bad behavior”, it changes the possibilities around responsibility and recourse. 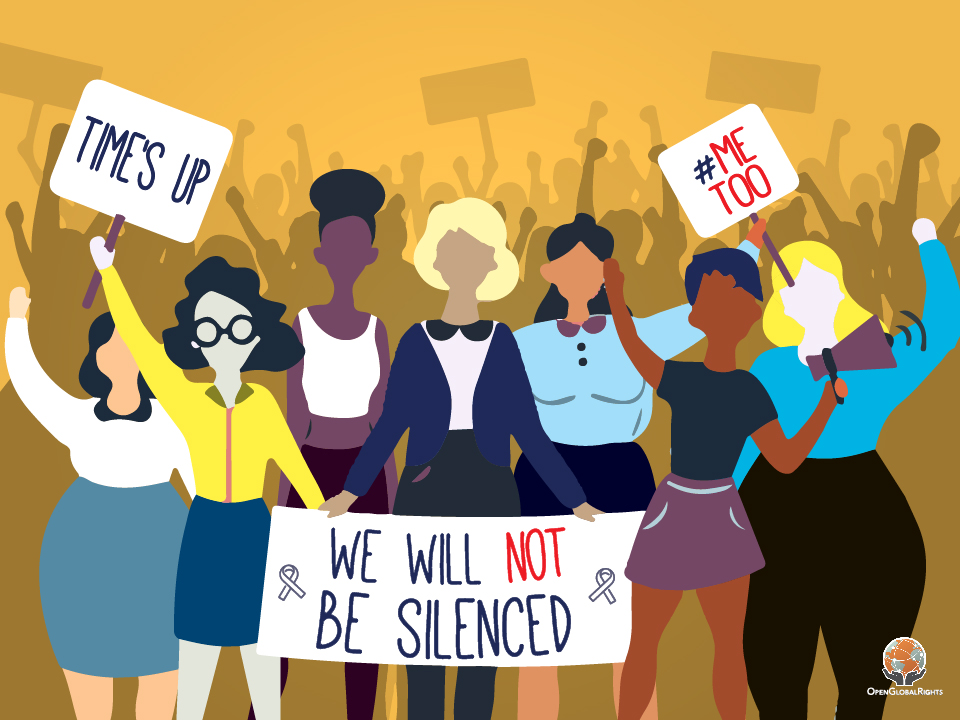 Womens participating in The Women's March of 2018, in Philadelphia (U.S.A)

In the past few months, we have seen a media storm intensify where stories of sexual harassment and sexual violence have taken center stage. Stories of powerful politicians, actors, directors, high-level tech investors and CEOs, and many more in positions of power have been swept in allegations of sexism, sexual harassment, inappropriate sexual advances, and other forms of sexual violence.

A space has now opened for women to speak up about their stories of harassment and sexual violence. Shruti Merchant, founder of Redwood City-based housing startup HubHaus, said that “[t]his entire year has been an awakening.” The visibility of abuse allegations has shattered the silence that has been historically accepted in male dominated industries. As a result, many abusers have lost their jobs, have been shamed and named as individuals who abused their positions of power to dehumanize women with sexual advances, inappropriate and unwanted touching, and many other forms of sexual violence.

We have also seen that more accounts of sexual harassment and sexual violence abuse have surfaced with the #Metoo movement. The #Metoo movement was an incredible use of hashtags and social media that opened the space for women to feel that they could speak up about painful, dehumanizing or experiences of shame and not feel alone. “For a long time, most women defined their own sexual harassment and assault in this way: as something unspoken, something private, something to be ashamed of acknowledging.” While not an absolute solution or a movement with long term objectives, the #Metoo movement opened up a Pandora’s box of stories of sexual violence that has sparked a fire of activism with other campaigns such as #TimesUp.

However, the labelling of sexual harassment and sexual violence against women as “inappropriate” or “disappointing” behavior—rather than as criminal or as a human rights violation—is troubling. Savanahh Guthrie commented on the recent allegations of inappropriate sexual misconduct by Matt Lauer, asking: “How do you reconcile your love for someone with the revelation that they have behaved badly?” While it is shocking to learn that respected colleagues and co-workers have been responsible for the abuse, the more important question becomes, why do we frame these issues of gender-based violence as merely “bad behavior”?

According to the World Health Organization (WHO), “one in every three women have been beaten, coerced into sex or abused in some other way—most often by someone she knows.” Illustrating the endemic nature of sexual violence, an open letter representing 700,000 female workers in the American agriculture sector welcomed the creation of the #TimesUp movement, while indicating that they, like many women, have endured sexual harassment and gender-based violence in the shadows hidden from the public eye:

We wish that we could say we’re shocked to learn that this is such a pervasive problem in your industry. Sadly, we’re not surprised because it’s a reality we know far too well. Countless farmworker women across our country suffer in silence because of the widespread sexual harassment and assault that they face at work.

How we define this problem is important, because international normative frameworks determine the potential protection mechanisms and means to seek accountability. The United Nations Declaration on the Elimination of Discrimination Against Women defines gender-based violence as “any act of gender-based violence that results in, or is a likely to result in physical, sexual or mental harm or suffering to women, including threats of such acts, coercion or arbitrary deprivation of liberty, whether occurring in public or in private life.” Gender-based violence has been instrumental in providing a framework for a spectrum of different forms of violence against women or other genders outside of the male-female binary.

Gender-based violence is thus prohibited under international human rights law. Although the United States is not a state party to the Convention on the Elimination of all forms of Discrimination Against Women (CEDAW), the prohibitions of gender-based violence against women that are framed in CEDAW have risen to customary international law thereby requiring its prohibition.

In the United States, sexual harassment has not been traditionally viewed as a human rights violation or more particularly, a form of gender-based violence. Instead, sexual harassment and other forms of gender-based violence have been treated as belonging within the “private” sphere.  As an added barrier, domestic remedies that address gender-based violence are limited when the violence has been perpetrated by private actors. In many countries, sexual violence is underreported, not investigated or prosecuted in the same manner as other similar crimes that are not based on sex or gender. In addition, pre-existing relationships between the victim and the perpetrator provide another barrier to victims where they are pressured to reconcile with aggressors and where the violence is considered “a private matter.”

In order to address the systemic and social obstacles, the public discourse needs to include comprehensive responses that shatter the notion that this type of violence is only between individual perpetrators and survivors of this violence. In addition, this conversation and reframing of sexual harassment as gender-based violence needs to step out of the gender-binary dichotomy that assumes that women are “victims” and men are perpetrators. This discourse needs to move away from women and other gender-minorities’ victimhood and incorporate the idea of a survivor’s “situatedness.” The perpetuation of power imbalances in patriarchal dualisms and stereotyped gender roles must be broken in order for there to be a change in the means by which women and gender minorities are marginalized and their rights are violated.

Sarah Dávila-Ruhaak is the co-founder and director of the International Human Rights Clinic at The John Marshall Law School.