Rights activists tend to identify secularism with women’s rights, but if we don’t engage with religion, we can’t effectively confront many wrong-headed policies and ideas.

Do human rights activists need to “get religion”, or should they steer clear? Indeed, the religious challenge to women’s rights is so fraught and complex that secular groups at the UN often avoid the issue entirely. The same is true in international development circles, where (at least until recently) development actors have tended to more-or-less completely ignore religious dynamics and instead uphold secular approaches that treat religion as though it is only relevant in the private sphere of society, if at all.

Such head-in-the-sand secularism, however, can cause serious problems.

By relegating religion to the private sphere, where women are more likely to be located than men, conservative religion often flourishes unchecked, strengthened by appeals to “group rights”. The liberal democratic state doesn’t want to “interfere”, but then effectively leaves women to fend for themselves.

Let’s consider the notion of “group rights” more closely. Men are more likely than women to publically articulate the “group’s” views, and some may draw on conservative religio-cultural ideas to do so. These same men (and some women) may also claim that certain practices must be protected to safeguard their distinct culture, even when those practices violate women’s rights. In such instances public authorities in western settings, such as the police or social services, may then be reluctant to “interfere” in curbing or protecting women from practices including female genital mutilation (FGM), forced marriage or honour-based violence (all of which have been justified in the name of culture).

If these conservative religious interpretations are not engaged with head on—in an informed and respectful way—then secularism and a liberal desire to “let groups live their own private lives in peace”, can be harmful for women.

The limitations of secularism in helping to secure women’s rights can also be seen elsewhere. Even in settings we imagine to be entirely secular, such as Western Europe, religion often implicitly shapes public policy, especially that relating to family and gender roles. For instance, in both Europe and the USA welfare policy has been shaped by socially conservative religious dynamics in the post World War II period in ways that continue to be felt today. In a similar fashion, patterns of church-state relations also affect family policy and abortion regimes in ways that one might not expect in what are supposed to be secular settings, suggesting that secularism has not been able to deliver what it has typically promised (a public sphere free from the influence of religion).

If religious ideas and values are not acknowledged and discussed head on, the ways in which they shape these supposedly secular norms will go unnoticed, limiting our ability to step in and act.

Again, if religious ideas and values are not acknowledged and discussed head on, the ways in which they shape these supposedly secular norms will go unnoticed, limiting our ability to step in and act.

Over the last few decades, change has come about with the rise of new forms of “religious feminisms”, including instances in which women explore rights from within their own religious traditions. Some so-called secular feminists are also beginning to realise that they do in fact need to engage with religion and religious actors in ways that go beyond only viewing religion as a problem or as something that has a purely private, personal relevance. As a result of these changes, new secular-religious dialogues are increasingly important in the worlds of human rights advocacy and international development.

Similarly, some development actors have “turned to religion”, engaging with faith-based actors to deliver aid and development, and working with faith leaders to tackle gender discrimination, often by promoting religiously-based ideas about rights. For instance, for over 10 years the United Nations Population Fund's innovative work around “Culture Matters" has supported work with religious leaders and faith based organisations on population and development, including human rights, reproductive health, women's empowerment and HIV/AIDS.

Critics worry, however, that after decades of neglect there has been a “rush to find the religious” that prioritises faith over other engagements, and over-estimates the positive potential of religious feminisms in particular. Mariz Tadros, for example, is concerned that although “FBOs (faith-based organizations) provide women with a range of spiritual and social activities”, at the same time they may also control women’s agency and expect them to conform to certain ideas of religiously appropriate gender roles and behaviour. 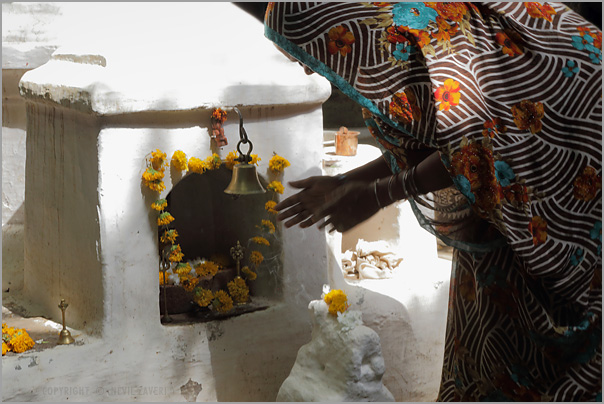 A woman performing her morning "pooja" (religious worship) before going to work at a handloom society in India.

While we should be cautious about engaging in an unreflective manner with individuals and groups likely to cause harm to women’s rights and those of other marginalised groups, religious traditions are not monolithic. The Catholic Church, for example, has been a major barrier to same-sex marriage, but is also “characterized by a great heterogeneity of stances regarding sexuality, despite its strongly restrictive doctrine.” For instance, in Argentina in May 2010, twelve priests influenced by liberation theology voted in favour of the rights to both marriage and adoption for same-sex couples, thus going against the position of the Catholic hierarchy in the country.

And while religions are often particularistic, engagement is important for pragmatic reasons. In many Islamic countries, for example, there is some evidence that “any attempt to reform gender relations that excludes religion is likely to fail.” And in some African settings—where “underlying inequalities in gender relations exacerbate the impact HIV and AIDS are having on women and girls”—the churches are playing a role in changing attitudes and behaviours.

There is no blueprint for how liberals ought to engage with religion. To secure gender equity, however, we must move beyond a narrow secularism, and take religion seriously. We may disagree with some interpretations provided by religious actors, but feel much more comfortable with others. At the same time, however, we must never privilege religious approaches to human rights and development over others. It’s a tricky balancing act.

Emma Tomalin is director of the Centre for Religion and Public Life, senior lecturer in religious studies at the University of Leeds, and former research associate in the Religion and Development research programme.