A new African treaty promises to protect the human rights of the elderly.

Rosa Kornfeld-Matte’s recent article excited and inspired those of us working in the field of human rights for older people. The fact that such high level conversations on ageing are being held among UN member states provides the basis to implement appropriate frameworks that strengthen the rights and autonomy of older persons. In fact, at the 26th Summit of the African Heads of State and Government on January 30, 2016, we saw a major breakthrough: African governments finally adopted the Protocol to the African Charter on Human and Peoples’ Rights on the rights of older persons. This was after almost eight years of drafting and redrafting, lobbying, negotiations and pushing for the recognition of the human rights of older people.

This protocol represents the highest level of political commitment from African leaders in promoting and protecting the rights of older people. It is one of the few decisions on older people taken by the AU since the adoption of the African Union Policy Framework and Plan of Action on Ageing (2002), another critical milestone in the ageing agenda.

Among the many key issues, the protocol urges member states to adopt legislative or other institutional measures to ensure that older people enjoy full rights, duties and freedoms as agreed in the protocol. It urges member states to combat all forms of discrimination and violence, to ensure access to justice and equal protection before the law, and to protect the right to income in the form of pension or other social protection measures, as well as a number of other fundamental rights.

It is important that governments and activists alike prepare for the ageing populations now.

A particularly important outcome in the protocol was the provision on older women, and the commitment there to ensure they are protected from gender-based violence, sexual abuse and discrimination. The provision specifically calls for member states to take necessary measures to eliminate harmful social and cultural practices, including witchcraft accusations, which affect the welfare, health, life and dignity of older women.

This protocol was adopted at a time when the population in Africa is growing at an unprecedented rate. The UN Department of Economic and Social Affairs (UNDESA) estimated that Africa’s population is expected to rise drastically from about 1.1 billion in the year 2013 to at least 2.4 billion by the time we reach 2030, making Africa the fastest growing continent. The boom in Africa's population will largely be in sub-Sahara Africa. In Tanzania, for example, the country's population was 34 million 13 years ago but has now grown to 45 million and is projected to reach 276 million by 2100, close to the current population of the United States.

Of course, the population of older people will equally grow in the coming years, thanks to improved health and longer lifespans. Currently, Africa has approximately 66.5 million people aged 60 years and above; by 2030, there will be 103 million older women and men in the continent, perhaps many more.

With these projections, it is important that governments and activists alike prepare for the ageing populations now instead of waiting for the crisis to hit us. There is an urgent need to ensure national, regional and international legal frameworks and policies are in place and countries are planning with population aging in mind. 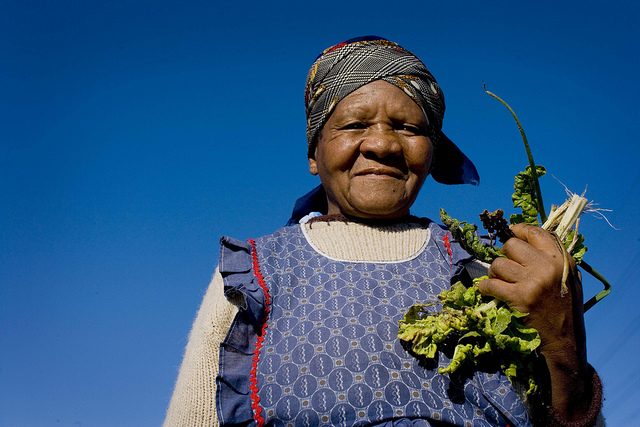 Flickr/Department of Foreign Affairs and Trade (Some rights reserved)

We should recognize the valuable contributions older people make to social and economic development in Africa. For instance, small-scale farmers produce 75% of the food consumed in Africa, with the majority of these being older women.

As a result, the tendency of having a cut off age of 49 and forcing everyone else to fit into a 50+ age group—such is the case with Demographic and Health Surveys (DHS) as well as the HIV prevalence rates or surveys of most African countries—does not help decision makers and planners to initiate policies and design programmes to address specific needs of older people in specific situations. In fact, meaningless measures like this will only further increase regional disparities and inequalities that the agenda 2030 aimed to alleviate.

In addition, we should all stop looking at older people as a burden to our society and recognize the valuable contributions they have made—and continue to make—to social and economic development. For instance, in Sub-Saharan Africa between 40%-50% of children orphaned by AIDS are cared for by older person, with an average of three children for each caregiver. In agriculture, small-scale farmers produce 75% of the food consumed in Africa, with the majority of these being older women. These are important contributions that many policymakers usually forget to acknowledge while instead focusing on the “burden” to the existing systems.

Legal instruments such as the African protocol on the rights of older persons, and the work done by the United Nations Independent Expert, will go a long way—if implemented—to ensure that older men and women all over the world live healthy and dignified lives. Ideally, these processes and instruments will force us to review and update our perceptions on older people and ageing. Therefore it is important that African Member States accelerate the ratification of the Protocol on the rights of older people and support the call for a United National Convention on the Rights of Older People.

Jamillah Mwanjisi is an activist and development practitioner working on various human rights issues in Africa. Currently she is the head of Policy, Advocacy and Communication at HelpAge International, East, West and Central Africa Regional office based in Nairobi, Kenya.