In August 2016, the World Social Forum brought global justice activists to Montreal, the first time it was ever held in the global North. But this reorientation of the movement fell far short of its goals

Since its inception in 2001, the World Social Forum has tried to bridge the North-South divide to transform the global economic system. Positioning itself as counterweight to the neoliberalism of the World Economic Forum, the “anti-Davos” has been the crossroads for myriad global social movements—for fairer trade rules, for worker rights, for stronger environmental protections, for sovereignty of indigenous peoples, etc. The idea for the WSF originated among Brazilian and French activists who rejected the idea that “there is no alternative” (TINA) to neoliberal capitalism. For the WSF and its supporters, “another world is possible.”

Meeting in Montreal, however, was a controversial decision. Until now, the WSF has held all its major gatherings in cities throughout the global South like Porto Alegre, Dakar, Tunis, and Mumbai. According to one member of the WSF’s governing body, the International Council, “Montreal doesn’t meet any of the criteria for the usual location for the WSF.” Yet the Montreal collective argued for the WSF to shift its perspective on global resistance, moving to “the heart of the Empire” to achieve social transformation.  If the altermondialistes were to be effective, they argued, Northerners needed to be drawn into the fight. 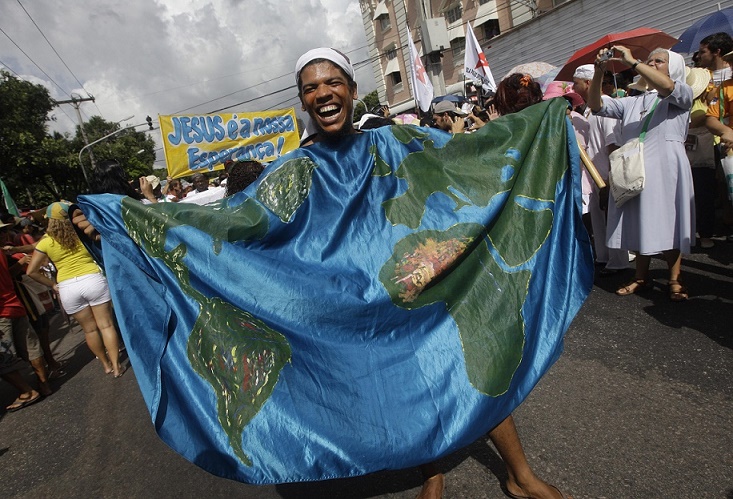 A demonstrator at the 2009 World Social Forum in Belem, Brazil. What are the consequences of moving the WSF out of the global South?

Granted, Montreal isn’t really the “belly” of the neoliberal beast. Though described by its mayor as the place where “Europe and North America converge,” its cultural strengths aren’t matched by political prominence. A meeting in Ottawa, Washington, or New York would have provided more symbolic and substantive resistance to powerful Northern actors.

Another rationale to hosting in a Northern city is to better reach the general public, whose votes, voice, and money could help support the fight for global justice. For example, Alvaro Garcia Linera, Bolivia’s vice-president, highlighted the “need to change the mindset of people with more power.” Chico Whitaker, a founder of the WSF from Brazil, said “we must call in people who never thought about changing the world.” It isn’t clear, however, whether the 2016 WSF did more than preach to the converted.  On the first day of workshops, two international NGOs, Caritas and Secours Catholique, hosted a discussion on popular mobilization strategies, but almost all the attendees were staff from those two groups. Moreover, an overall low attendance number—organizers boasted a high estimate of 35,000 attendees, but just several thousand were at the opening march—meant that many panels and workshops were poorly attended.

It isn’t clear whether the 2016 WSF did more than preach to the converted.

Attendance at the WSF has been shrinking for a decade since over 100,000 people gathered in Brazil in 2005, but this year accessibility issues made it even smaller and more contentious. It is extremely expensive for Southern organizations, especially those unconnected to comparatively rich Northern NGOs, to finance the trip. Plus, one member of the International Committee told us that local organizers broke with longstanding WSF tradition and did not set aside money for “solidarity travel” that helps subsidize low-income attendees. To make matters worse, seventy percent of international visa applicants were denied entry to Canada. Though some activists expressed outrage and shock, the difficulty of obtaining visas—Canada is especially restrictive—was one of the original arguments against holding it there in the first place.

The result was a forum composed mainly of Quebecois activists. Yet the Canadian press largely ignored the WSF, except for a few moments of negative coverage that highlighted dissension within the ranks of participants who disagreed with the proposal to endorse the movement against international support of Palestinians, decried by others as “hate speech and intolerance.” Still, local organizer Alexandre Warnet was the picture of optimism. Sheltered from the drizzle by a tent in Parc Jarry on the final day of the conference, Warnet was excited to have just chatted with several people that knew nothing about the forum previously but had been drawn in by a parallel environmental event, the Ecosphere, a marketplace of sustainable products and fair-trade consumer goods.

To be fair, the various meetings of the WSF have always drawn heavily from the local region, and each WSF has sought to channel ideas and resources to local civil society groups. In Montreal, then, one of the goals was essentially to bring global concerns to Quebecois activists who were veterans of the 2012 student protests or connected to First Nations communities. But the WSF was also meant to do the inverse—to bring global support to local movements.

The participants we interviewed were confused. “Which movements are we supposed to be in solidarity with?” asked an organizer from the United States. Canadian journalist and activist Naomi Klein was deep in the throws of launching the Leap Manifesto, a relatively new venture focused on energy democracy. But even Klein derided the event sarcastically as the “global North Social Forum.” As another longtime WSF convener put it, “a global Left will not emerge from Montreal.”

North American activists definitely need to be better organized on the homefront. That’s exactly what regional forums are for, such as the three that have been held in the US in 2008, 2010, and 2015. This year’s organizers argued that technology would allow many to participate in the WSF from afar, but only four people attended a workshop on these “extension” activities, and only a few groups engaged with the WSF online.

The young and energetic activists in the Montreal collective represent a new political generation, and most of the attendees we interviewed still thought the Forum should continue. According to our surveys—and judging from the low turnout on the Forum’s final day of “action assemblies”—only a minority of people attend the Forum in search of social movement action; most come for networking and information exchange.

But even if the WSF remains a meeting space rather than a generator of specific campaigns, the location of the meeting is still critical. Only a few Southerners got a seat at the table this year, meaning that—like political power and economic wealth—the networking and information sharing mostly happened among Northerners.  Ultimately, this year’s meeting in Montreal did little to raise public awareness of global challenges, and it was the wrong place in which to build robust North-South relationships.

The Montreal organizers’ argument for fighting for global justice from the North is a good one. Unfortunately, though, the WSF is simply not in a position to organize and finance a global meeting in a rich country that is inclusive. It was a good experiment, but we concur with many people who feel the WSF should return to the global South to remain politically relevant.

Jamie K. McCallum is a Professor of Sociology at Middlebury University.