Japan fails to protect refugees—but arguing it should do so because its aging society needs new immigrants hasn’t worked.

When visiting New York for the UN General Assembly in September 2015, Japanese Prime Minister Shinzo Abe was asked what his country was planning to do in response to the influx of Syrian refugees in Europe. His answer to this predictable question was surprising. Abe said that ‘before accepting immigrants or refugees, [Japan needs] to have more activities by women, elderly people – and we must raise our birth rate’. The fact that protecting refugees is an international legal obligation, not just one policy option states might want to consider when it suits them, never seems to have occurred to Abe.

Japan’s cavalier attitude towards its international human rights obligations is nothing new. However, Abe’s statement also points to two elements of Japanese refugee policy: first Japan has been woefully inadequate in accepting refugees; and second, refugee policy in Japan has been subsumed in the public debate surrounding immigration.

Japan has been woefully inadequate in accepting refugees.

Japanese refugee policy remains extremely restrictive. In 2015, there were 7,586 applications for refugee status, of which 27 were accepted. A further 79 cases were accepted on humanitarian grounds, but the total still amounts to only 106 persons.  It is not uncommon for asylum seekers to be detained for months or even years during the protracted status determination process. In 2005, in response to sustained criticism, Japan established an independent appeals board, which was a clear improvement; nevertheless, the board’s recommendations are not binding, and recently the government has started to reject appeals despite positive recommendations from the board. And under its pilot refugee resettlement programme, only 86 refugees have been resettled in Japan since 2010.

Abe’s comment also shows how the entire refugee debate in Japan has been linked—indeed, hijacked by—the broader discussion on immigration. Japan has suffered a chronically low birthrate for years, resulting in what is now a shrinking, and aging, population. What few measures the government has taken have been piecemeal and inadequate, and there is widespread concern regarding the long-term sustainability of public healthcare and public pensions.

Immigration has been proposed as one of the solutions to the slow-moving crisis. Many Japanese remain wary of the idea of a sizable number of foreign nationals living in the country and threatening its alleged ethnic and cultural homogeneity. Still, for some years there appeared to be an element of inevitability in the immigration debate. Like it or not, recruiting foreigners to live in Japan and ‘become Japanese’—whatever that meant—seemed the only way forward. 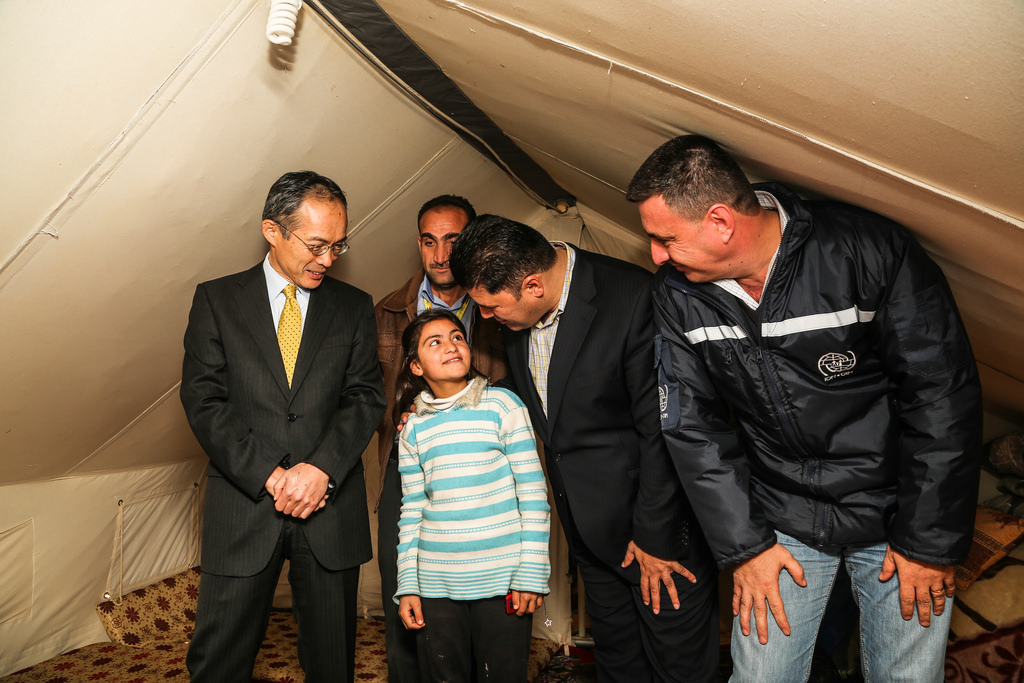 In that context, some commentators—including some refugee advocates—understandably saw the case for immigration as a means of also promoting greater protection for refugees. Refugees, it was argued, are not merely persons requiring assistance; they will also be part of the workforce, contribute to the economy, and thereby enrich society.

Inherent in this argument is the positive ‘branding’ of refugees, which many advocates (both in Japan and elsewhere) see as a way to counter the negative portrayal of refugees. Images of refugees working hard in offices and factories in their host countries are not uncommon. UNHCR famously promoted its ‘Einstein was a refugee’ campaign. The portrayal of refugee protection in Japan as being a subset of larger migration flows is not therefore only attributable to Abe, or the government in general. Refugee advocates also played a part.

Potential benefits for host countries notwithstanding, it needs to be stressed that providing protection to refugees is an international human rights obligation. It is not contingent upon whether the host country deems it beneficial to welcome economic migration. As grey as it might be in practice, there is a line between refugees and economic migrants, and it is an important one. Not all refugees are Einsteins, and some refugees are deeply traumatized (or physically disabled) from their experiences and are unable to work. Portraying refugees solely as victims does not fully encapsulate their situation, and of course runs the risk of being patronizing. However, painting them predominantly as economic contributors runs the risk of creating a distinction between ‘good’ refugees (who can work) and ‘bad’ ones (who, for whatever reason, cannot).

In Japan there has always been a distinction in the minds of many between the ‘good foreigner’ and the ‘bad foreigner’. The ‘good foreigner’ includes highly skilled persons (generally with white skin), who bring advanced technologies to the country. It also includes tourists who spend large sums of money. Acceptable foreigners might also include persons who provide services to Japanese, such as foreign ‘trainees’, sex slaves trafficked to Japan from various Asian and other countries, and unskilled labourers in an irregular situation.

The common trait of the ‘good foreigners’ is that they are disposable—easily discarded when they are no longer of use. We benefit from the fruits of their labour and they benefit from our overwhelming generosity in admitting them to the country in the first place. In contrast, the ‘bad foreigner’, is a troublemaker, one who doesn’t play by the rules. Instead of consistently showing humility and gratitude to the Japanese people, they question discriminatory treatment, and demand their ‘rights’.

The immigration debate in Japan has largely died out, mainly because the prospect of large-scale permanent immigration was simply too daunting for most Japanese. Although there are still some proponents for large-scale immigration, their voices are no longer mainstream. Since refugees were linked with economic migrants in the minds of many in the public, what little debate there was on refugee protection in Japan is also disappearing. Abe’s comments at the UN were barely even reported in the mainstream Japanese media. Even worse, right wing elements in Japan have been stoking up anti-refugee sentiments, in particular using the Syrian refugee inflow into Europe.

Japan’s record at providing protection to refugees is dismal. At least in the long run, admitting refugees would probably be of help to Japan in sustaining its economy—however, that is hardly the point. Submerging the legal—and moral—case for refugee protection in an argument for economic self-interest may often be tempting for advocates, but it carries dangers of its own. Japan’s failure to live up to its international obligations should be tackled head-on.