If refugee advocates don’t shine a light on budgets, it will be nearly impossible to ensure sustained support for refugee protection efforts.

The Syrian refugee crisis has garnered much attention from the media and the international community, but how do we channel this attention into action that results in effective and sustained protection of refugees? As Roni Amit and Loren Landau point out, the best legal regimes cannot guarantee protection if key stakeholders subvert them. James Hathaway makes a similar argument in regards to the Refugee Convention: the issue is not so much the law but rather its operationalization. Yet Bill Frelick highlights the disagreement about who should be the primary implementer—states or international organizations like the UNHCR—and, like Tim Finch and James Milner, he questions the viability of schemes that expect states to acquiesce to any external authority.

Missing in the debate so far, however, is the question of funding. Whether the solution is a revitalized UNHCR, a system of managed protection, or schemes that creatively align refugee protection with the interests of states, it will need adequate and sustained funding to work.

Yet the money is not forthcoming. The recent deal brokered between the EU and Turkey caps the number of Syrian refugees that can be relocated in Europe to just 76,000 per year (about 0.0015% of the EU’s population) with only 0.3% of the EU’s 2014-2020 budget allocated to its Asylum, Migration and Integration Fund. The UNHCR likewise reports that as of April 26th, 2016, its funding level for its Regional Refugee Resilience Plan is at 32% and the Syria Humanitarian Response Plan is at 22%. To have an impact, international institutions like the UNHCR must be adequately funded so as to have the operational capacity to implement their mandates. Budgetary analysis can help ensure that relevant agencies and states have the resources they need to proactively address crises as they develop. 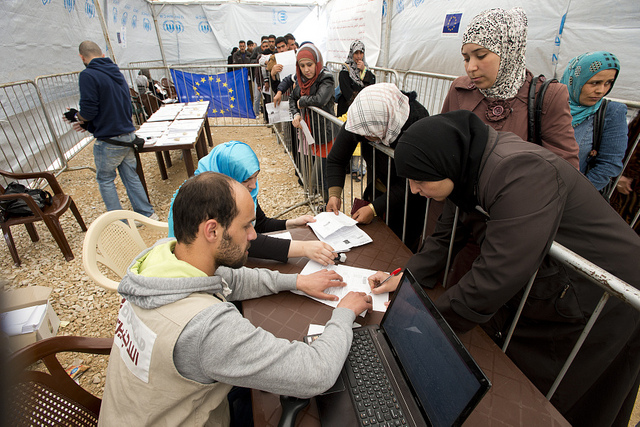 Syrian refugees in Lebanon register for aid from the World Food Program.

There are some suggestions funding for the Syrian refugee crisis may be improving. In September 2015, The Guardian reported that the World Food Program (WFP) would cut rations due to serious budget shortfall, but the WFP recently announced it would restore full rations thanks to increased funding. This most recent injection of funds is thanks to a conference held in London in February 2016, where states and international financial institutions pledged grants and loans to address the humanitarian and refugee needs of the region. The EU has likewise significantly increased its financial support to the region pledging over €5 billion, with €3 billion going to Turkey as part of the deal reached in March 2016. Yet in considering these increases in funding, most are short-term: more than half (52%) of the funding raised at the London conference is for 2016 alone, and the €3 billion promised to Turkey likewise aims to fund refugee projects for a single year. This short-term approach exacerbates issues of unpredictable funding faced by global South countries hosting large refugee populations. When global attention shifts elsewhere, will donors continue to offer comparable levels of support?

If advocates don’t shine a light on budgets, it will be nearly impossible to take a proactive approach to addressing crises as they emerge.

Brazilian President Dilma Roussef offers perhaps the best example of the gap between rhetorical and financial support. On September 21st, 2015 Dilma wrote an op-ed proclaiming Brazil’s solidarity with Syrian refugees and emphasizing that “Brazil welcomes refugees with open arms.” It is true that Brazil has provided expedited visas for refugees fleeing Syria; Europeans and other high-income countries could learn from this. However, looking at the UNHCR’s 2015 budget, we see that Brazil contributed a measly $743,133 compared with the US contribution of $1.2 billion. If Brazil’s contribution was proportional to the US, controlling for GDP, its contribution should be 240 times larger, around $179 million. Of course, it would be unfair to expect an upper middle-income country like Brazil to proportionally match the contribution of the world’s largest economy. Yet its current contribution is still low compared to its past contributions to the UNHCR.  Moreover, as opposed to Europe, refugees in Brazil lack any kind of state assistance. The lack of assistance coupled with a troubled economy in recession, and rising unemployment makes Brazil an unattractive host for refugees.

Upper-middle income countries like Brazil account for 24% of world gross product, according to 2014 figures. The European Union accounts an equal proportion: 24%. Including NATO members not part of the EU, this figure climbs to about half of the world’s GDP. Yet EU and NATO countries provide 80% of the budget for UNHCR. While increasing upper-middle income countries’ influence in global economic governance institutions like the IMF and the World Bank has been a major foreign policy goal for the past decade (Brazil has increased its quota to the IMF 264% in this time), there has not been a concomitant focus on other institutions, like the UN system. Here Emily Arnold-Fernandez’s argument takes on new salience: budgets offer a way to measure states’ commitments and a common reference point to coordinate advocacy across different domestic settings.

Looking at budgets as they stand calls into serious question Hathaway’s vision of a revitalized UNHCR—it can barely consistently fund its ad-hoc and piecemeal approach today. It likewise casts doubt on Finch’s managed protection proposal: does the EU’s 0.3% investment of its budget truly provide it with the institutional capacity to even process the asylum requests from arriving migrants even if they get sent back to Turkey? Finally, if advocates don’t shine a light on budgets, it will be nearly impossible to take a proactive approach to addressing crises as they emerge or ensuring sustained support. Domestic advocacy is key to ensure that funding countries offer consistent and adequate levels of support, but also in recipient countries to ensure that funds are invested in ways that best promote refugees’ rights.

These examples all show the importance of mainstreaming budgetary analysis into all types of human rights advocacy. As part of our accountability work, we need to assess whether the budgets allocated for human rights implementation actually reflect an adequate contribution based on commitments and income levels, among other variables. Without this analysis, the institutions and laws we have fought so hard to make will lack the operational capacity to address issues as they develop. This approach not only provides advocates with a tool to push for proactive approaches to crisis management, it could also help to emphasize refugees’ agency by including possible benefits of immigration into the calculus. The current reactionary approach lends itself to the deepening of crises to the detriment of both funders and rights-bearers.

Sean is a Ph.D. candidate in the Politics Department at Princeton University. From March 2020 until January 2021, he also served as project manager for the Narratives Project at JustLabs.