Restrictions on civil society undermine climate mitigation efforts and impede the collaboration that is so crucial to slowing the climate crisis over the next decade. 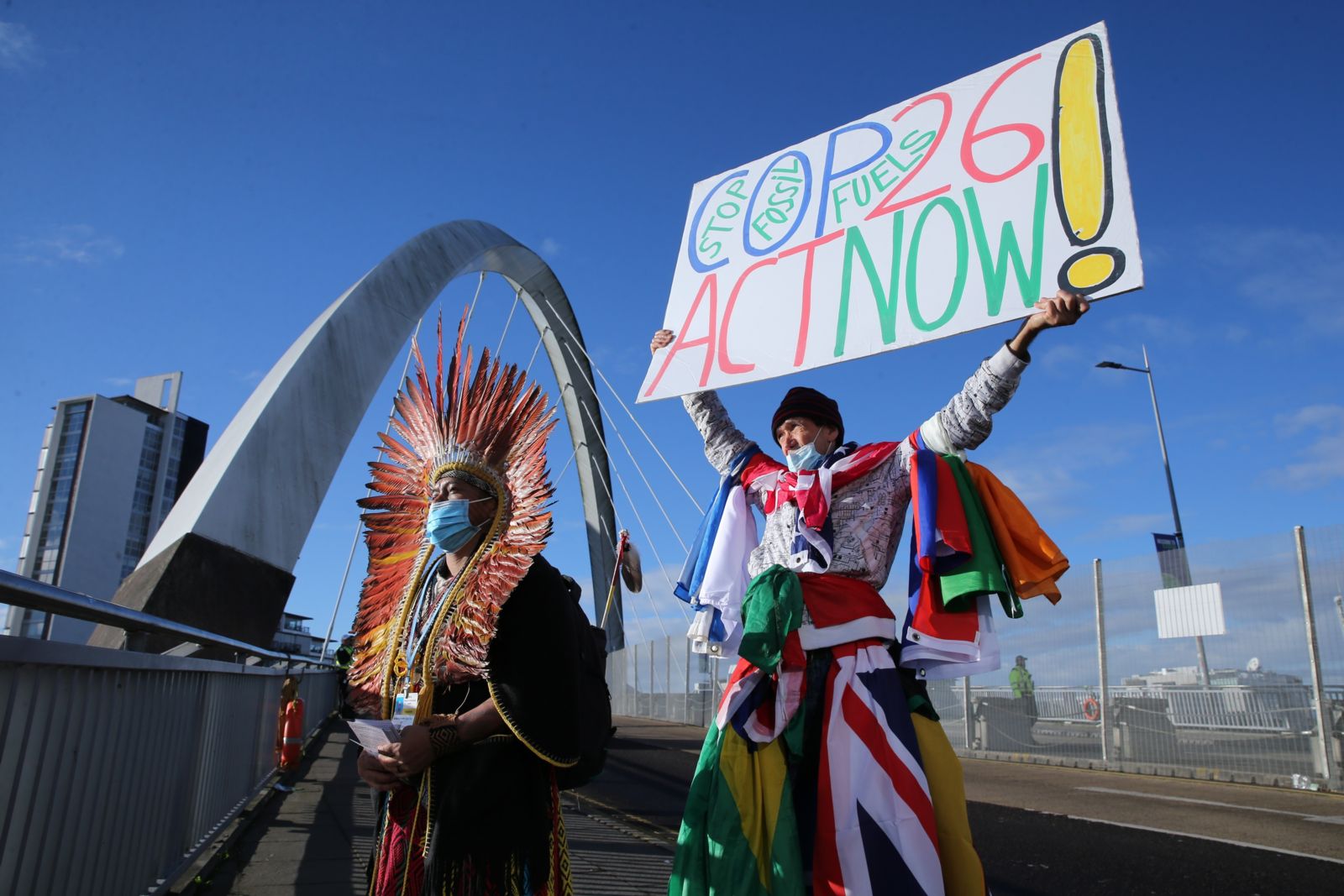 Environmental activists participate in a protest on the sidelines of the UN Climate Change Conference in Glasgow, Britain, 03 November 2021. EFE/EPA/ROBERT PERRY

As leaders convene in Glasgow this week for COP26, we need to remind them that the climate crisis can only be mitigated together if it is based on a meaningful partnership with individuals, vulnerable groups, environmental defenders, and youth and civil society organizations. For the partnership to be meaningful, it requires a strong action on the side of state officials to enable rather than restrict rights and freedoms.

However, many states impose unnecessary and disproportionate restrictions on the right to protest, free speech, access to information, and freedom of association—fundamental freedoms and rights that enable the public to participate in decision-making in environmental issues. In 2017, Katharina Roll already highlighted the attacks against environmental rights defenders and the need to protect them. Four years later, many defenders and civil society groups are still facing repressions. Moreover, the barriers to participation and action intensified during the global health pandemic, when states introduced further restrictions to these freedoms under the pretext of fighting against the spread of COVID-19.

According to a recent report by the United Nations Special Rapporteur on the rights to freedom of peaceful assembly and of association, the most pressing challenge climate activists face is physical attacks, often preceded by online and offline harassment and intimidation. Sadly, over 70% of human rights defenders killed every year are standing up for the environment. They are the victims of vilification and disinformation and have been labelled as ‘extremists’ and ‘green criminals,’ often portrayed as serving the interests of ‘militant’ and ‘terrorist’ groups.

According to our research, a growing number of laws are enacted to limit and ban the freedom of assembly to target climate protests or criminalize legitimate and legal methods used by protestors (e.g. by jailing climate activists under ‘public nuisance laws’ or using workplace safety laws to ban protests in forests). States and companies misuse the justice system to intimidate environmental activists and their organisations by initiating criminal prosecutions and Strategic Lawsuits against Public Participation (SLAPPs) or by carrying out surveillance on their communications and activities. Meanwhile, some states restrict the activities of civil society organizations and their ability to access funding or impose highly burdensome audit requirements on them to silence their voices.

Our analysis also found that states restrict access to information or require organizations to have a critically high mass of members in order to take part in national-level policymaking; this limits their ability to participate and provide their expertise on policies and decisions that impact the environment. But challenges to participation exist beyond national borders. Climate defenders regularly face barriers to obtain access to UN-level climate change negotiations, too.

Under the United Nations Framework Convention on Climate Change, states committed to promote and cooperate in education, training and public awareness related to climate change, and to encourage the widest participation in this process, including that of non-governmental organizations. These commitments were further reinforced by the Paris Agreement.

The UN Human Rights Council Resolution no. 40/11, followed by the launch of the Geneva Roadmap, urged states to take all measures necessary to ensure the rights, protection, and safety of all persons, including environmental human rights defenders, who exercise the above rights which are essential for the promotion and protection of human rights and conservation of the environment. States were also urged to adopt and implement strong, effective laws or policies ensuring, among other things, the right to take part in the conduct of public affairs and  cultural life; the freedom to seek, receive, and impart information; and equal access to justice, including to an effective remedy, in the field of the environment.

Ultimately, repressions and violence against civil society and climate defenders are contrary to the states’ human rights commitments under the International Covenant on Civil and Political Rights and violate freedom of association, peaceful assembly, expression, access to information and participation, among others.

These restrictions on civil society undermine the climate mitigation efforts. They impede the collaboration that is so crucial to slowing the climate crisis over the next decade  We, therefore, encourage the COP26 delegates to take the pledge to:

As the United Nations Special Rapporteur on the rights to freedom of peaceful assembly and of association highlights, “States cannot address the climate emergency alone. The ability of individuals to mobilize, organise and connect and to contribute to shaping public opinion and decision-making without fear… is essential to the production of effective climate action and just transitions.”

We encourage the states to drive the change together.

The COP26 will host a side event to discuss how climate mitigation can be implemented with meaningful participation of broader communities. Watch live on Friday, November 5 at Youtube here.

Eszter Hartay is a senior legal manager at the European Center for Not-for-Profit Law.

Ivana Rosenzweigova is a consultant at the European Center for Not-for-Profit Law.