States complain that the ICC needs to broaden investigations beyond Africa—yet some of the same states are now trying to limit the increased budget needed to do so.

With countries still reeling from the news that Burundi, Gambia and South Africa are seeking to withdraw from the International Criminal Court (ICC), the annual meeting of the 124 states parties of the Rome Statute got off to a surprisingly positive start in The Hague last week.

Most countries affirmed their support for the court, recognized the need for the court to expand its work beyond Africa, and urged the three countries to reconsider. Although they have yet to change their minds, Burundi and South Africa engaged constructively in this dialogue. But any progress made is now threatened by a new effort by 11 states to restrict the court’s funding, which may wreck the court’s efforts to open investigations in other regions. The Court has faced criticism over the fact that all but one of its active investigations are in Africa.

The initiative by Canada, Colombia, Ecuador, France, Germany, Italy, Japan, Poland, Spain, UK and Venezuela is part of a damaging long-term effort by the biggest financial contributors to the court to curtail the ICC’s growth, citing the global financial crisis and inefficiencies in the court. This effort ignores the recommendations of an independent expert body that additional funding is needed. It also ignores the devastating impact that reductions of resources requested by the Court in previous years have had on the court’s capacity to conduct investigations and keep pace with crimes committed at alarming rates in new situations. 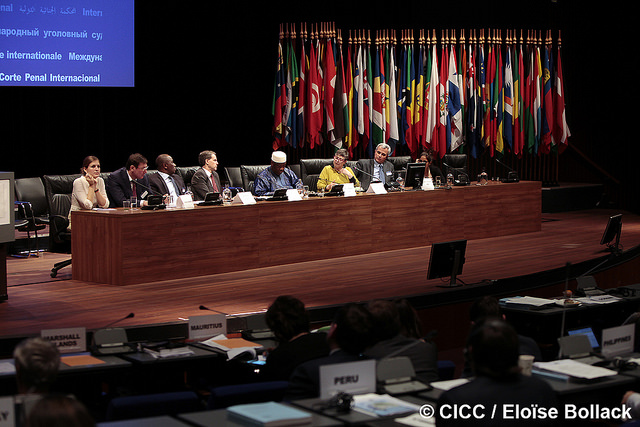 Flickr/Coalition for the ICC (Some Rights reserved)

15th Session of the Assembly of State Parties of the International Criminal Court at the World Forum in The Hague, Netherlands.

This effort comes only days after a new report from the Office of the Prosecutor indicated that it may imminently open an investigation in Afghanistan, which could cover allegations of torture by US officials; that it’s edging further toward investigations in Palestine and Ukraine; and that it’s keeping an open mind on Colombia.

The hypocrisy here is at a new level—supporting further ICC investigations (importantly, outside of Africa) one day but refusing to fund them the next. Only last Thursday, Canada’s foreign affairs minister, Stéphane Dion stated: “We must work harder to enable the court to better protect the inhabitants of other continents against those who trample their most fundamental rights with impunity. We need more of the International Criminal Court, not less.” Other governments have made similar statements.

If countries are really serious about ensuring the court’s efficiency, they would work to fill every desk in the court and its field offices as soon as possible to ensure that the court addresses its current backlog of investigations and delivers justice to as many victims as possible in all regions.

However, it is increasingly clear that the good will of even the strongest champions of international justice to support and fund the ICC cannot be taken for granted when their financial interests are affected.

The cynical approach of these governments toward funding the ICC shows little has been learned from the failures of other global institutions arising from lack of funding.

This should not happen at the ICC. A dedicated majority of countries needs to keep all states honest. These 11 states should be reined in or voted down to ensure the ICC receives the resources it needs.